Costello keeps himself in the news

Peter Costello and Anna Bligh are among the most talked about politicians this week, with Anna Bligh up to third spot, thanks to her anti-corruption reforms this week.

Peter Costello just can’t help helping. It’s just his extremely helpful nature. Perhaps trying to assist Malcolm by diverting some attention from the release of the OzCar inquiry? Didn’t really work, but always the team player … Meanwhile some PR experts opine that perhaps showing a bit of sympathy for Godwin Grech (the tack many journos took) might have been the more politically sensible response from the Opposition?

Elsewhere Anna Bligh up to third, continuing to show an unnerving tendency to prefer good policy to looking after mates, Chris Bowen way up, leading the totally unexpected calls from the Government for the Opposition Leader to resign, while Anthony Albanese used a Rolling Stones quote to try and cover up the Left’s abject failure on gay marriage.

Down this week were Stephen Smith and Nicola Roxon as the focus slowly moved away from terror attacks and health reform, while Nathan Rees is perhaps trying to present the originally claimed preference for substance over spin, the NSW Premier down to a historically low 13th place. 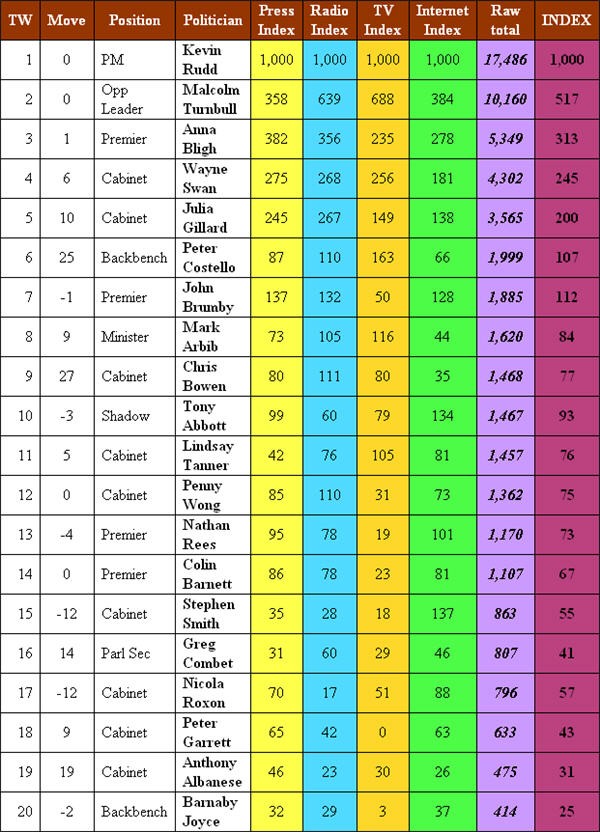 Peter Costello can still draw a crowd — does that say more about him or us?

If it ever was okay for an individual to take the rap for a collective moral failure, then this would be a prime candidate. Meanwhile the organ grinder starts looking for a more presentable primate.