Stories of the planned terror attack in Australia dominate almost all the media this morning. Richard Farmer wraps the best, then looks at the rest. 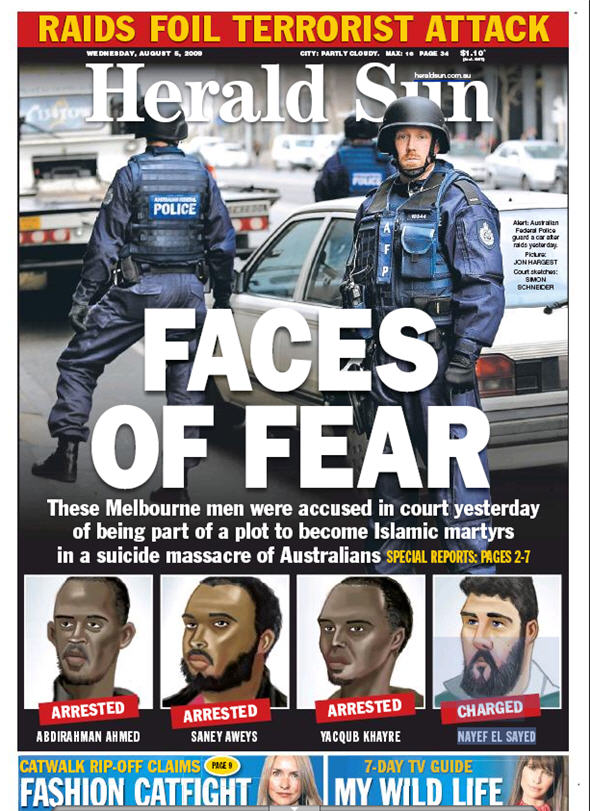 Young man was prime target for militant recruiters – A dilapidated warehouse turned makeshift mosque in North Melbourne has emerged as a key hub in a sprawling militant Islamist network, whose home base in the Horn of Africa has become a major nucleus of the global terrorist movement – The Australian

Open gate to terrorists – A terrorist attack on Sydney’s Holsworthy Barracks was ‘‘likely imminent” before the alleged plot was crushed in a series of pre-dawn raids yesterday, but the main entrance to the army base remains guarded by unarmed private security men – Sydney Morning Herald

Security at base was adequate, says ADF – Sydney Morning Herald

Somali extremists on a ‘fatwa order’ from God – The Australian

Out of Africa, into the dock – The Australian


Victoria Barracks may have been alternative target for terrorists – who  planned to attack Holsworthy army base in Sydney. A train station, yet to be named, was also mentioned in text messages between members of the alleged cell, a court was told – Melbourne Herald Sun

Melbourne academic calls for engagement with Somali immigrants – Prof Greg Barton, acting director of the Centre for Islam and the Modern World at Monash University, writes in the Melbourne Herald Sun that if terrorist recruiters have been having some success in our suburbs, it is a matter for genuine concern. How we react is very important, not least to ensure we diminish the threat rather than increase it.

Religion is an issue – Andrew Bolt in the Melbourne Herald Sun on how reluctant we are still to honestly debate Islam, terrorism . . . and immigration, suddenly the biggest elephant in a tension-filled room.


PAGE ONE OF THIS MORNING’S PAPERS How Godwin Grech blew the whistle – and came to regret it – News Limited journalist Steve Lewis reveals the untold story behind Godwin Grech and the faked email threatening to destroy Malcolm Turnbull. Basically he tries to explain how he got conned. news.com.au online

Bolkus ‘in line for $400,000’ – Former Labor senator Nick Bolkus was in line to receive lobby fees of $400,000, plus GST, under an agreement with the South Australian Jockey Club, a parliamentary inquiry has been told – Adelaide Advertiser

Spin doctors to quell heritage backlash – Adelaide City Council has enlisted a team of professional spin doctors as it braces for a backlash over plans to heritage list hundreds of homes and businesses in the CBD. The Advertiser understands media firm Ball PR held a confidential briefing at Town Hall last night to coach councillors on strategies to sell the plan to the public – Adelaide Advertiser Dinner with Kevin Rudd pays for election campaign – Kevin Rudd effectively wiped the $90,000 campaign debt of failed Labor candidate Peter Tinley within three hours in April when he dined with oil and gas executives and business leaders. Mr Rudd raised almost $100,000 for state Labor’s coffers when the branch charged 20 guests $5500 each for a seat alongside him at celebrated North Perth restaurant Maurizio – The Australian

RBA won’t lift rates soon – David Uren writing in The Australian believes the next move for interest rates is likely to be an increase, with the Reserve Bank increasingly confident that the threat of recession has passed. However, the bank is not yet convinced that growth is sustainable other than with the help of government stimulus spending and its abnormally low official cash rate, and is unlikely to lift rates over coming months.

Cash splash feeds seeds of revival – Tim Colebatch in the Melbourne Age says it’s not just in Australia, it’s happening all over. New data is reporting new confidence, new spending, rising asset values. Things are not turning out as bad as we thought.

Turnbull blows his chance to give voters the answer they deserve – Peter Hartcher says Australia needs to know what Malcolm Turnbull has has learnt from utegate that will lead him to make fewer errors, not more excuses.

Smell of taint can damage more than Bligh – Craig Johnstone argues in the Brisbane Courier Mail that the return of corruption’s taint to public life in Queensland risks doing some fundamental harm to the state’s long-term future.

An explosive exit, now give voters their say – Natasha Robinson writes in The Australian that now the true workings of the NT Labor machine have been so publicly exposed, voters should be given a fresh chance, the chance to cast a vote with their eyes wide open.

Malcolm’s finger pointing isn’t fooling anyone – Dennis Shanahan in The Australian says Turnbull’s problem is that he is responsible politically for the debacle, no matter how unfair that is or how much he blames Grech, he’s still responsible and has to act like he’s responsible. Turnbull should have apologised and moved on. He’s now ensured he will be pursued over his links with a liar and fraud and continue to be distracted.

The wheels fell off, but Turnbull’s still gunning the ute – writes Annabel Crabb in the Sydney Morning Herald

Hezbollah stockpiles 40,000 rockets near Israel border – Three years after Israel fought a bloody war in Lebanon against Hezbollah, there are growing fears that hostilities could erupt again this time with the militant group better armed than ever – London Times

Nasser picked as next BHP chairman – Mr Nasser was chosen from a shortlist of candidates, selected over a period of 18 months with the help of Heidrick & Struggles, the recruitment firm. He was elected by the unusual method of a secret ballot amongst the 15 board members to prevent lobbying by candidates. The ballot was managed by KPMG, BHP’s auditor – Financial Times of London

Xstrata appeals to Anglo as profits plunge – Mick Davis, chief executive of Xstrata, called again on rival miner Anglo American to engage in merger talks for the sake of both companies’ shareholders, as the Swiss-based mining company’s profits fell 68 per cent but still beat expectations – Financial Times of London

Queensland high on KPMG fraud barometer – Half of all Australia’s investment scams originate in Queensland, a new study has found – Brisbane Courier Mail

Media may be restrained from reporting on operation details – The Sydney Morning Herald understands law-enforcement agencies are demanding the Rudd Government act to give them the capacity to censor the media in the future following the reporting of terrorism raids across Melbourne yesterday.
Police agencies criticised The Australian for publishing details of the planned raids on terrorist suspects on the same morning as they were carried out.

Media unfair on Hanson, Hollingworth, says Howard – Pauline Hanson and former governor-general Peter Hollingworth were treated harshly and unfairly by the Australian media, former prime minister John Howard says. Lecturing on the role of the media in Australian politics at the University of Melbourne tonight, Mr Howard said the media’s pursuit of Dr Hollingworth was a “character assassination”. – Melbourne Age

Plastic sword the least of ASIO’s bungles in ‘terror raid’

Is ASIO willing to let innocent people suffer in order to secure more draconian powers? Or is it just incompetent?

The Courier-Mail apologises for yesterday's front cover. And other media tidbits of the day.

What do you get when you cross a blatant disregard for facts and legal due process with a "feral Andrew Bolt column"? The Herald Sun, of course.