When buying a house is better than rent

The pick of the morning media on a day when six papers have a different page-one choice.

David Cameron shocks radio listeners with Twitter ‘twat’ joke – London Evening Standard. For a full report on the Conservative Leader’s use of language see our separate Crikey story Something to Twitter About

Rent is not always the cheaper option – Adelaide Advertiser

Alice town camps dispute resolved – A bitter dispute between the Federal Government and the indigenous Tangentyere Council over management of the squalid Alice Springs town camps has finally been settled. The council has agreed to a $100 million houses-for-leases deal – Melbourne Age

Minister to step up pressure – Indian Foreign Minister V. S. Krishna will use a visit to Australia next month to pressure the Rudd Government and the states over violent attacks on foreign students and problems in the college sector – Melbourne Age

Anna Bligh wants ban on donations – The Australian reports Queensland Premier Anna Bligh has called for a national ban on political donations as she tries to regain control of the debate over integrity in government, following a damning critique of the state’s 11-year Labor administration by former corruption fighter Tony Fitzgerald.

Terry Mackenroth advised company set for urban sprawl windfall – Former minister Terry Mackenroth, who drew up the plan to limit urban sprawl in southeast Queensland, advised a company that was one of the biggest winners from the region’s redrafted development laws – Brisbane Courier Mail

Australia to sign UN disability protocol – has cleared the way for people to take complaints about disability discrimination policies to the United Nations – including prospective migrants with disabled children. The Rudd Government will announce today that a year after signing the UN Convention on the Rights of People with Disabilities, it intends to agree to the optional protocol that establishes a complaints mechanism for breaches of the treaty – Melbourne Age 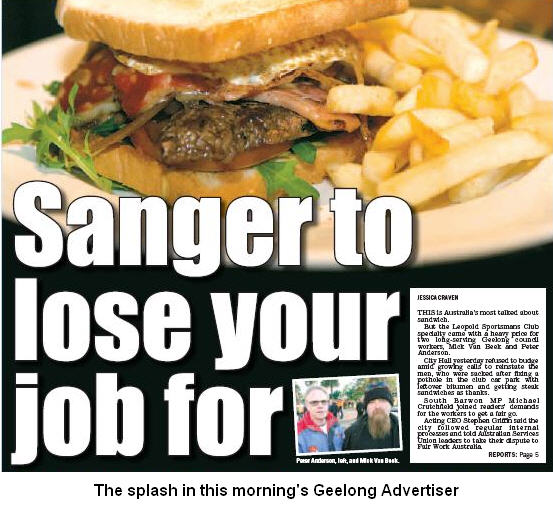 Health workers walk out in protest – More than than 300 workers from the Sydney West Area Health Service have walked off the job to protest against the potential outsourcing of jobs, and understaffing which is set to worsen with impending redundancies – Sydney Morning Herald

DPP refuses to provide lawyers – A judge yesterday accused the Director of Public Prosecutions, Nicholas Cowdery, QC, of ‘‘being close to perverting the course of justice” as a public spat over funding deteriorated – Sydney Morning Herald

High Court judge criticises courts ‘nightmare’ – Justice is beyond the reach of ordinary Australians because they cannot afford the “nightmare” of going to court, a former High Court judge says – Adelaide Advertiser

We can’t bridge reality gap – Peter Hartcher writes in the Sydney Morning Herald that when Barack Obama visits Indonesia he will come to Australia not as a bridge but as a detour.

The remaking of the Mad Monk – Miranda Devine writes in the Sydney Morning Herald that to the gathered political junkies on Tuesday the book launch was seen as Tony Abbott’s first crack at remaking himself as a real contender for the Liberal leadership.

Manifesto of a ‘usable’ leader – Greg Sheridan clearly likes what he read in Tony Abbott’s book with his comment in The Australian that after Turnbull, and after the next election, Abbott remains the Liberals’ only realistic alternative.

Case closed, debate open – Paul Austin the Melbourne Age writes that the first thing to say about the Theo Theophanous case is that it has been horrendously unfair to Theophanous.  The charge against him has been comprehensively thrown out by the courts at the first opportunity, and yet his career has been irreparably damaged.

PM, the mining boom is not a passing phase – Alan Wood in The Australian says if Kevin Kevin Rudd heeded Ken Henry and Glenn Stevens, he’d know resources will long be king. 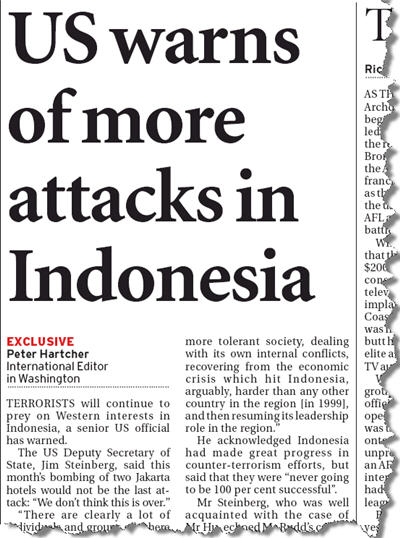 US warns of more attacks in Indonesia – Peter Hartcher Sydney Morning Herald International Editor writes from Washington that terrorists will continue to prey on Western interests in Indonesia, a senior US official has warned.

Digging dirt with a sledgehammer – The Sydney Morning Herald profiles the owner of Australia’s next uranium mine.

Watchdog waits after girl reveals rape on air – Sydney Morning Herald reports that a top rating radio station has defended a stunt in which a 14-year-old girl was strapped to a lie detector before revealing she had been raped, but the broadcasting watchdog is not investigating the incident because a formal complaint is needed to instigate action.

Racing heavyweights ready for prize fight – A Federal Ministry of Racing may be the eventual outcome of tomorrow’s crisis meeting in Randwick where powerful racing interests are expected to clash over how to alleviate deteriorating returns to trainers, owners and breeders – Sydney Morning Herald

War erupts as Karmichael defects – Karmichael Hunt was yesterday forced to defend himself against claims of disloyalty and greed from as revered a figure as Queensland rugby league great Wally Lewis, after signing with the new Gold Coast AFL franchise. The Brisbane fullback said the challenge of being a ‘‘pioneer”, in becoming the first NRL player to switch to AFL, was far greater than any financial incentive – Sydney Morning Herald

Surgery frauds alleged – Up to 27 surgeons may have been involved in defrauding the Victorian Government’s accident insurers of millions of dollars, an investigation by state Ombudsman George Brouwer has found – Melbourne Age

The threat from rising sea levels

Tony Abbot, the liberal intellectual.
Its not often you can get a moron and an oxymoron in the one sentence.