While the Kyle and Jackie O show provoked controversy in Australia, British Conservative Party Leader David Cameron stirred up his own little storm on popular commercial radio in England overnight.

British Conservative Party Leader David Cameron ventured onto popular commercial radio in England overnight Australian time for one of those gossipy little chats which the spin doctors plan to show young people that their man is human. And so it proved. Getting into the relaxed atmosphere of the Absolute Radio show, the Eton-educated Mr Cameron, renowned for having impeccable manners though it is reported that he does swear in private, dropped the dreaded “T” word – much to the amusement of his radio hosts. You can hear it for yourself here.

The London Evening Standard (which nowadays under its new Russian ownership has a bright and attractive look) reports that at first a Tory spokesman said, inaccurately, that “twat” was not classed as a swear word under radio guidelines. Mr Cameron’s spokeswoman then made a full apology and said the T-word had been a mistake.

“David Cameron does not condone the use of bad language,” she said. “It was a genuine slip up and he meant no offence.” A Tory source suggested Mr Cameron did not realise that the word is usually considered highly offensive, particularly to women. “I think it is a generational thing,” said the source.

What generation the Tory source was referring to is not clear because the on-line service dictionary.com says the following about the origin of this slang or vulgar noun meaning vulva: “1650-60; perh. orig. dial. var. of *thwat, *thwot, presumed mod. E outcome of OE *thwat, akin to ON thveit cut, slit, forest clearing (> E dial. (N England) thwaite forest clearing).”

What is clear is that Mr Cameron is not the first public figure to get in to a little trouble with the use of this twat word as this extract from the  Online Etymology Dictionary, © 2001 Douglas Harper shows: 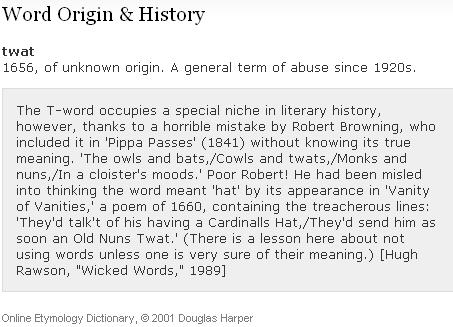 What generation the Tory source was referring to is not clear.