Sick Victorians can wait no longer hospital treatment – Sick Victorians say they can’t wait any longer for the nation’s health system to be fixed. But all Kevin Rudd promised them yesterday was another six months of talk. And he failed to rule out new taxes to pay for any changes – Melbourne Herald Sun

Cost pain predicted as health heads for overhaul – The Australian

Tax rise to bring a smile – Workers will pay for a proposed $3.6 billion scheme to provide basic dental services for all Australians through a 0.75percentage point rise in the Medicare levy – The Australian

Ageing population to add to pressure – The Australian 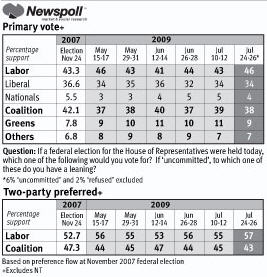 Turnbull’s popularity sliding – Dennis Shanahan in The Australian writes that Malcolm Turnbull’s support as preferred prime minister has slumped to a new low of 16 per cent – the same level as Brendan Nelson before he was dumped as Opposition leader in September.

Opposition takes risk on instincts – Dennis Shanahan reflects in The Australian on Newspoll and wonders if the the Opposition Leader decided to “go with the flow” on the issue of an emissions trading scheme just as the tide has changed?

Julia Gillard switched on to business concerns – The Australian reports that Julia Gillard has moved to allay employers’ concerns about changes to the building industry watchdog, warning that unions face penalties even if they take unlawful action when the body’s coercive powers have been switched off.

Mulesing deadline abandoned – Melbourne Age sdays the Australian wool industry has dumped a long-standing pledge to phase out mulesing by the end of 2010, a move that has outraged animal welfare groups and led to criticism by some farmers.

Holy warriors pitch for Liberal seats – A bitter split among conservative Liberals in NSW, complete with sectarian undercurrents, is driving mainstream conservatives to side with the moderates and oppose preselection bids by what they consider to be extreme elements of the party – Sydney Morning Herald

Rudd’s essay shows his tribal loyalty – Gerard Henderson in the Sydney Morning Herald is not among the critics who believe Kevin Rudd should not have spent time last week writing a 6100-word essay on the economic crisis, or that the Herald should not have carried the Prime Minister’s long missive on Saturday.

The problems in aspiring to better health – Editorial in the Adelaide Advertiser says Prime Minister Kevin Rudd says his goal is simple: “The best health system in the world – that is our objective.” Fair enough. Yet, after 16 months of study and thousands of submissions and 123 recommendations, his immediate plan is to undertake more consultation. This is somewhat disappointing.

Enough talk on health, we need action – Brisbane Courier Mail editorial finds Kevin Rudd’s hand-picked reform commission is frank in both its assessment of the problems besetting our health and hospital systems and the prescriptions for dealing with those challenges… While there is a logic about the process Mr Rudd outlines – it is a big-spending agenda that will impact on everyone – he is stretching the patience of voters, who understood something would happen mid-term if there was no discernible progress on the part of the states. No one can credibly argue there has been improvement in health service delivery since the election, despite the overdue increase in funding for waiting lists.

Climate changes as alarmists exposed – Piers Akderman in the Sydney Daily Telegraph finds an Australian scientist with impeccable credentials who has come forward to outline the problems with the case being stated by the politicians, who are in turn reliant on those model-addicted climate scientists.

Clawback not quite what doctor ordered – George Megalogenis writes in The Australian says to take the tax cut Labor didn’t want to give you at the last election and subtract the cost of the health system it wants to give you in its next term. That will get you to the nub of Kevin Rudd’s dilemma.
He is carrying tax cuts skewed to higher income earners, but he can’t pay for his health reform agenda simply by soaking the rich.

Much more than bravery required – Adam Creswell in The Australian looks hard at the new health report and finds the plan for a federal takeover of hospitals is still there.

Iron fist weakens diplomatic body – Malcolm Colless in The Australian thinks the foreign affairs department is grinding to a halt as policy is run from the PM’s office. 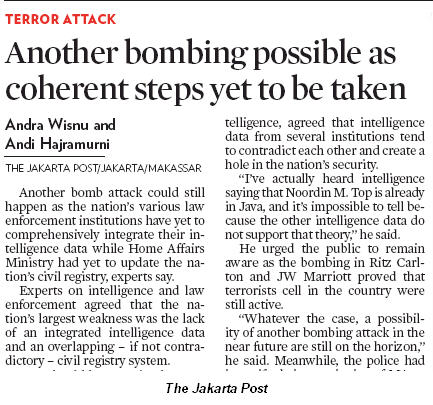 Obama needs to get his mojo working – Peter Hartcher in the Sydney Morning Herald writes that in the minds of Washington’s political establishment, a giant index hangs above the White House: a two-digit number that defines the President’s power to get anything done. It is so central to US politics that the veteran CNN commentator Bill Schneider calls it Washington’s equivalent of Wall Street’s Dow Jones share price index. It is the president’s approval rating. 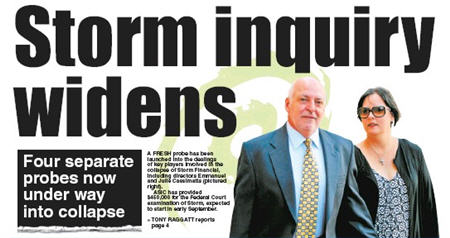 New probe into Storm bosses – The liquidator to failed Storm Financial Ltd is to conduct a public examination of the company’s directors, Emmanuel and Julie Cassimatis, to identify possible breaches of duty and corporate offences – Townsville Bulletin 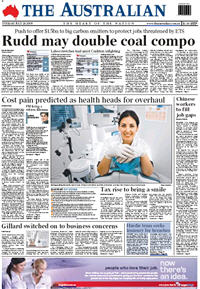 Julia & Judith – She’s about to publish a cookbook of her own, but Judith Jones, the editor who brought Julia Childs to the American public, has another hope on the horizon – she tells Sarah Hampson in The Interview that a new movie depicting her friend will rekindle love for food classics – Toronto Globe & Mail.

Cheong Liew given ‘lifetime’ honour – Adelaide’s most famous chef, Cheong Liew, has rebounded from a scalding national review by being honoured last night with one of the restaurant industry’s most prestigious awards – Adelaide Advertiser

Brisbane’s ‘high risk’ venues, clubs targeted – More than 70 “high risk” licensed venues across Brisbane, including the Qantas Club, will be the first targeted in the State Government’s ban on glass – Brisbane Courier Mail

Help wanted: Schools need principals – SA secondary schools are labouring under a shortage of suitably qualified principals, forcing some senior principals to delay or come out of retirement – Adelaide Advertiser