An Australian PM in the suburbs acting, well, totally normal

The best of Monday morning's media

POLITICS AND ECONOMICS AND POLITICS 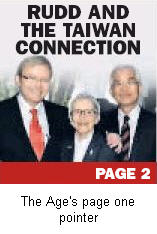 Corruption claim on man linked with Rudd trip – Melbourne Age continues to look at the connection of Kevin Rudd and Taiwanese business and government.

Labor’s China Inc is starting to smell fishy – Glenn Milne in The Australian questions that when  it comes to Kevin Rudd and his government’s relationship with what’s increasingly known as China Inc, it’s really the Gordon Nuttall question that comes to mind. Or more precisely the now famous Rodd Martin question.  “Three hundred and sixty thousand dollars for absolutely nothing?” he asked.

Rudd finds stimulus at a suburban house-warming – The Melbourne Age reports on the Prime Minister of Australia mixing it with the new tenants of a public housing project in Tullamarine, talking footy, kitchen appliances and heating systems, picking up dropped Barbie dolls and acting, well, totally normal.

Aldermen earn $1000 an hour – Katherine Town Council – which pays its aldermen $10,370 per year – had 14 meetings in the past financial year that lasted a total of 10 hours and 15 minutes – Northern Territory News

Shoppers flag change – Positive signs have emerged that the worst of the global economic downturn may have passed. There have been strong rallies on overseas share markets and confirmation by a leading retailer that Australians are again beginning to spend – Melbourne Herald Sun

‘Tough’ talking PM is all spin – Ross Gittins in the Melbourne Age (and the SMH) writes of forcing himself to read every bit of Kevin Rudd’s latest 6100-word diatribe on economic recovery and reckons he now knows what it must be like to sit through one of Fidel Castro’s three-hour speeches. It was a combination of the sensible and the self-serving, marred by its partisanship.

We must nurture the humanities – Peter Singer in the Melbourne Age argues Australian universities need to do much more to fulfil their most important role: teaching students to think for themselves.

Corruption we have, but we sure ain’t Noo Joisey – Adam Graycar in the Sydney Morning Herald reckons the arrest of 44 people on corruption charges in the US state of New Jersey a few days ago highlights the sharp contrast between corruption US and Australian style.

Now comes time to pay the piper – Michael Stutchbury writes in The Australian that higher interest rates and rising unemployment. “Increased economic pain” and “unpopular budget cuts”. “Additional financial pressure on many families” and even “sacrifice”.
This is Kevin Rudd’s grim new economic lexicon as he calls on Australia to “tighten our belts”.

Ted Kennedy is making a final press for universal healthcare, from his sickbed – As Congress wrestles with legislation to give Americans access to quality care, which the Democrat worked toward for 46 years, the senator is sidelined with brain cancer, but not out of the game – Los Angeles Times

China ties itself in knots reacting to riots – The Xinjiang conflict raises the prospect of traumatic change, writes John Garnaut in the Melbourne Age

On the stormy seas of carbon reduction – Peter Hartcher in the Sydney Morning Herald sys Barack Obama went into the White House determined to lead the world on climate change, but he is facing a very rough passage as his administration trys to navigate a flimsy vessel through an impossibly narrow channel between two rocky shoals.

NBN’s new boss on hunt for staff – In a major coup for the Rudd government, Mike Quigley — Australia’s most broadly and internationally experienced telecommunications networks executive — will oversee the rolling out of the $43 billion national broadband network – The Australian

Act now on climate: Obama – Peter Hartcher of the Sydney Morning Herald interviews the Obama Administration’s climate change negotiator who warns that any country that delays enacting laws will miss out on a huge wave of investment waiting for the regulatory dam to break. 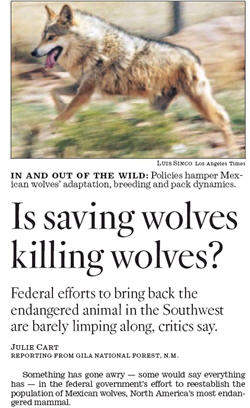 Carbon scheme stand-off remains – The Government and Opposition remain in a stand-off over an emissions trading scheme, despite Malcolm Turnbull’s offer to support it if extensive concessions are made – Melbourne Age

Up where birds nest, nature gets a hand – In the aftermath of the February 7 bushfires, Victorian authorities are giving nature a hand by planting hundreds of millions of mountain ash, alpine ash and messmate seeds in a bid to regenerate vast areas of forest lost in the fires – Melbourne Age

Google faces property ads war – Melbourne Age reports Fairfax Media and News Ltd are independently weighing up whether to pull the millions of dollars they collectively spend on buying key search terms on Google following the latter’s decision to list properties for sale on Google Maps.

Politics comes before lights and camera – Controversies around film festivals may shock, but they are not unexpected reports The Age in a preview of the Melbourne film festival.

Media braces for new data on ad revenue – The Australian

Hospital botches kill 4500 – Hospital errors claim the lives of 4550 Australians a year, according to a report to the Government that urges sweeping reforms to the health system.
Prime Minister Kevin Rudd will today release the National Health and Hospitals Reform Commission report, which warns that the current health system is unlikely to be sustainable without reform – Melbourne Age

Assault culprits caught on camera escape arrest – Queensland police are calling for ID scanners at all late-night licensed venues, saying it will lead to a significant reduction in violent assaults – Brisbane Courier Mail