Time to go, his mates believe – Paul Austin writes in the Melbourne Age that Theo Theophanous’ Labor Party colleagues are naturally pleased for him and his family that he has been cleared of this horrendous charge. But they will be still more pleased if he decides to quietly walk away from politics, with his head held high.

Billions stuck in super limbo – Australia’s superannuation industry is sitting on a massive $30 billion of funds – almost 38per cent of annual contributions – which cannot earn interest due to administrative blunders, stuff-ups and an antiquated payment system – The Australian

Unions back at the bargaining table – After more than a decade of decline organised labour is finding its voice again, writes Kirsty Needham in the Sydney Morning Herald.

Govt crisis with second minister’s threat to quit – The Northern Territory News understands NT Indigenous Affairs Minister Alison Anderson has not completely backed down from her threat to leave the party over a briefing where she was told only 30 per cent of the Commonwealth’s $672 million indigenous housing program would be spent on building homes. 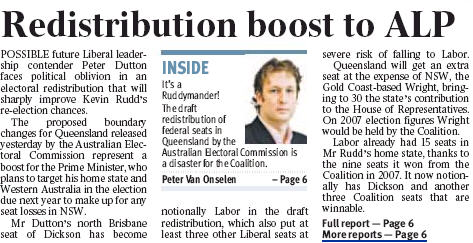 New seat honours poet, not pollie – named after Judith not Keith – The Australian

Digger death leads to upgraded gear – Diggers in Afghanistan will be given lighter body armour following concerns that protective kit worn by Corporal Mathew Hopkins, killed in a Taliban ambush in March, was too heavy and hindered movement – The Australian

ALP tensions over visas – Melbourne Age reports that tensions are brewing before next week’s ALP national conference over the contentious issue of temporary visas for foreign skilled workers.

No joke: City student towers get Government nod – A student accommodation development condemned by a Adelaide City Council panel as “a joke” has been approved by the state’s peak planning body –  Adelaide Advertiser

Orthodox spin – Shaun Carney in the Melbourne Age gives his spin on the prime minister;s economic spin contained in his latest essay.

Health care, oil and other needs on light side of the moon – Peter Hartcher in the Sydney Morning Herald looks a the world’s moon anniversary week

A blueprint for rule – Paul Kelly writes that in an aggressive analysis, Liberal spokesman Tony Abbott reveals how much Kevin Rudd’s 2007 public hospital takeover pledge shocked the Howard government and calls on the Liberal Party to abandon a century of history and embrace greater powers for the national government – The Australian

A pale imitation of talkfests past – Laurie Oakes in the Melbourne Herald Sun, the paper he worked for full time before becoming a national television star, gets nostalgic on the eve of the next ALP National Conference about conferences past.

China thought we won’t care for Hu – Hamish McDonald writes in the Sydney Morning Herald that the assumption by the Chinese was a Western country would not get very roused by the misfortune of a citizen who didn’t have a white face, someone naturalised fairly late in life and working back in his country of birth. It’s a mirror of a deep-seated perception among the Chinese themselves. Some people find it hard to keep ethnicity distinct from citizenship or nationality.

Turnbull makes emissions switch – The Melbourne Age reports that Malcolm Turnbull has decisively shifted the Coalition’s position on the emissions trading legislation, promising support if the Government accepts a number of changes.

Libs deliver ‘log of claims’ on ETS – The Australian says Malcolm Turnbull has sought to regain the initiative in the political tussle over emissions trading, presenting the Rudd government with a “log of claims” for immediate negotiations on the controversial Carbon Pollution Reduction Scheme. 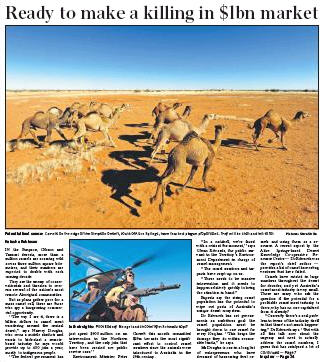 Ready to make a killing in $1bn camel market – The Australian

Hey Hey, it might be back – A aturday night return of an iconic program seems likely according to the Sydney Morning Herald

Girl, 12, dies as fears grow of swine flu surge – The Australian reports that a child with swine flu has died, taking the national toll to 48 and prompting a warning from experts of a renewed surge in cases as schools return from the winter break.

Off limits: sights and sounds of gambling – Clubs, casinos and gambling venues could be required to undertake significant renovations to make sure children are not able to see, or even hear, gambling – Sydney Morning Herald

Blake Ferguson saved by DOCS to live NRL dream – the Sydney Daily Telegraph calls it the most uplifting sports story of the year. How this young Cronulla star was saved by the Department of Community Services to become a genuine star of the NRL.

When was the last time the PM was interviewed on a serious programme? He sits and writes an ESSAY!!!!!!!! He TWITTERS!!!!!? why does he go on Rove but not Sky Agenda, Insiders, be interviewed by Laurie Oakes or on Meet the Press, Lateline or 7:30 report? Is he afraid? I think CRICKEY readers would like to know!

When you write an essay you are in control.
When you make yourself available for a serious interview you are not in control.