Panels packed with MPs – Former politicians will be appointed to head two of five new panels which strip councils of the power to approve developments worth more than $10 million. Of the 23 panel members to be named by the State Government today, more than half have worked as planning lobbyists or consultants – Sydney Morning Herald

Rape case a farce, MP’s lawyer says – The prosecution of Labor MP Theo Theophanous is predicated on evidence that was fabricated or is unbelievable and must be stopped before it goes any further, defence barrister Robert Richter, QC, told Melbourne Magistrates Court yesterday – Melbourne Age

Council traded circus rent for free tickets – Darwin City Council waived the fee for the Great Moscow Circus to use Mindil Beach land in a deal that delivered a swag of tickets to the aldermen. Alderman Greg Jarvis (not pictured on Page 1 of the paper as a clown) said he voted against the fee waiver and when he received 30 tickets he handed them back – Northern Territory News

Cornes keen to run again – Despite her searing foray into politics at the 2007 election, Nicole Cornes has declared she still has a “fire in the belly” and may run again. And she has revealed that her inspiration for studying law was the most unlikely of sources – watching the chick flick Legally Blonde – Melbourne Age

Let doctors do lists: surgeon – One of Victoria’s leading surgeons has called for decisions on waiting lists to return to doctors’ hands to ensure greater hospital accountability in response to the data manipulation scandal – Melbourne Age

Planning slowed by politics, not people – Professor Kim Dovey of the University of Melbourne’s school of design says the State Government was too afraid of a political backlash to implement its own policy and the fear was unnecessary – Melbourne Age

Taxing time to spruik big changes – Michelle Grattan in the Melbourne Age writes you can almost hear the collective sigh of relief in the Government at the glimpses of economic sunlight after a storm that, as it happens, hasn’t been as devastating as the forecasters had predicted.

Our soldiers are not trained for the wars they are in – claims Cynthia Banham who asks in the Sydney Morning Herald if has our Defence Force become complacent about its status?

Teachers key to improving the education system – Greg Whitby, the executive director of Schools of the Catholic Diocese of Parramatta, writes in the Sydney Morning Herald that blaming teachers for the failures of an archaic education system does not address our present challenges. Accountability and assessment must never be pursued at the expense of innovation and creativity, which is why rewarding teachers for improving test results will divide the profession rather than create a culture of collaboration.

Libs need to keep cool head to weather heat – Dennis Shanahan in The Australian argues the ETS will destroy Turnbull’s leadership unless he can master the policy dividing his party.

Turnbull is right, the Coalition can’t win this fight – Tony Abbott writes in The Australian

Police to secure Jakarta hotels – The terrorist network responsible for last Friday’s Jakarta bombings used methods so sophisticated and precisely executed that police, fearing another attack, have taken over responsibility for security at the city’s main hotels. Melbourne Age

Chinalco keen to invest here again – The president of Chinalco, Xiong Weiping, is ready to plunge back into new Australian resource investments, even as he obliquely criticised the country’s investment climate and the integrity of Rio Tinto – Sydney Morning Herald

Macquarie Airports may fly free from parent – Sydney Morning Herald reports suspicions the controversial operator of Sydney Airport could become the latest Macquarie satellite to sever its ties with its parent.

Emissions plan faces defeat: Minchin – Liberal Senate leader Nick Minchin has upped the stakes in the battle within the Opposition, flatly stating that the Government scheme will be defeated next month – Melbourne Age

Call for honesty in emissions debate – The most senior public servant on climate change has blasted criticism of the Government’s emissions-trading scheme made by the Opposition, big business and the mining industry. Martin Parkinson, the Secretary of the Department of Climate Change, used a speech yesterday to call for honesty in the debate as it entered its final stages – Sydney Morning Herald 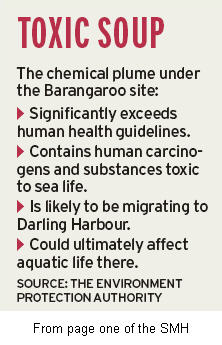 Don’t shut down nuclear debate: Mundine – The Federal Government says no to nuclear energy, yet one of Labor’s own says we need to have the debate about nuclear power plants if Australia is serious about addressing the threat of climate change – Melbourne Age

No need to go nuclear: minister – The Federal Government helped initiate another uranium mine yesterday but held fast against growing calls from the Coalition and the mining industry for Australia to consider nuclear power – Sydney Morning Herald

Blakiston mother of 16-year-old boy charged with murder – For 16 years, Beverley Ellen Eitzen cared for a boy with the mental capacity of a two-year-old.Yesterday, she appeared in court accused of his murder. She was, the Adelaide Magistrates Court court has heard, “loving, caring and devoted” to her intellectually disabled son, despite his violence and “behavioural problems” – Adelaide Advertiser 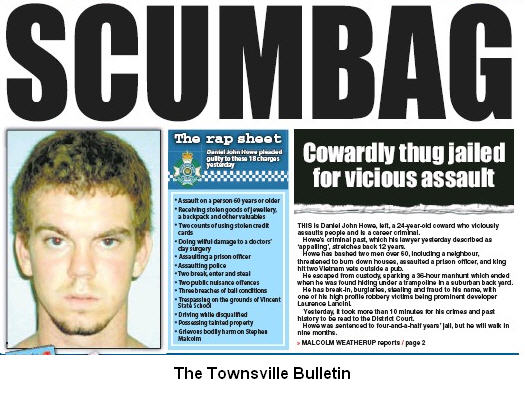 Scumbag – appalling past – man judged to be the lesser offender in a savage bashing assault in Landsborough St, North Ward last year was in fact the one person the law was eager to see off our streets – Townsville Bulletin

Judges complete Marcus Einfeld’s spiral of shame – The one-time Federal Court judge and barrister was struck off the roll of legal practitioners, completing his astonishing fall from grace over a $77 speeding fine. Justices James Allsop, Roger Giles and David Hodgson made the order in the Court of Appeal after finding Einfeld, 70, had engaged in professional misconduct and was “not a fit and proper person” to practise law – Sydney Daily Telegraph 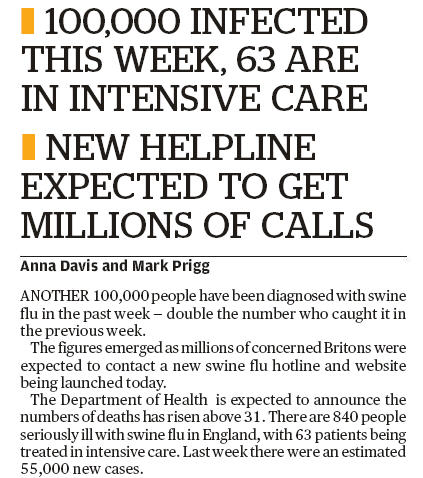 Swine flu website overwhelmed by demand as new cases double in a week – The Guardian, UK

Party drug fuelled Maroons – Explosive claims have emerged from the ruins of Queensland’s failed bid for a State of Origin clean sweep, with allegations some players were dabbling in a home-made party drug made by mixing a prescription sleeping tablet with the energy drink Red Bull – The Australian

Crown gets approval to expand – Melbourne Age reports Casino will be able to expand its gambling operations to a separate building under a new agreement signed by the Government.