They really are parliamentary wusses in Canberra,  the way they go on with their bogus points of order and school boy and school girl heckling. I cannot remember the last time there was a fair dinkum punch up on the floor of the House of Representatives. Gough Whitlam tossing a glass of water over Paul Hasluck is the closest I have seen to real aggression.

Up there in South Korea they know how to put a bit of real biff into the debate. A couple of scenes from yesterday’s discussion of legislation that will allow the major newspaper groups to own television stations: 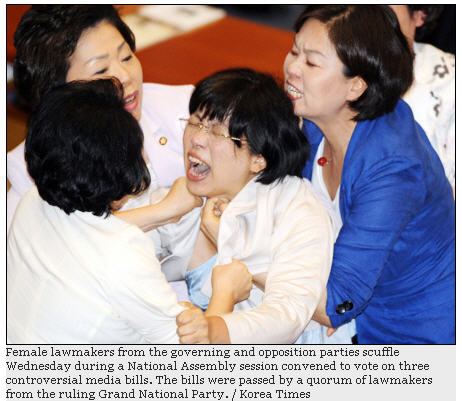 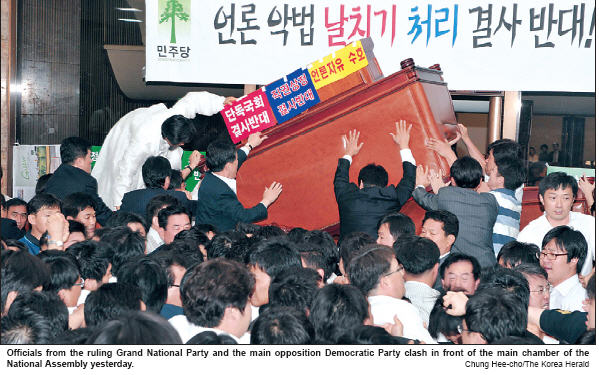 Inflation fall the biggest on record – Sydney Morning Herald reports Australia’s inflation rate has collapsed from 5 per cent to just 1.5 per cent in less than a year – the most dramatic slide on record. But far from celebrating felling what he had dubbed the “inflation genie” the Treasurer, Wayne Swan, sees it as a sign of weakness, of an economy under siege.

Premier passes on responsibility for FOI laws – Barely a month after introducing progressive freedom of information laws, the NSW Premier has downgraded their importance by handing responsibility for their implementation to the Attorney-General – Sydney Morning Herald

Not in my school’s backyard

20 years after historic Fitzgerald inquiry, dark forces return to Queensland – Queensland’s police service was rocked yesterday by revelations that 25 officers were involved in illegal and improper dealings with prisoners, including a convicted double murderer, provoking a warning from the state’s top corruption fighter that the lessons of the Fitzgerald inquiry had been forgotten – The Australian

Inquiry lessons easily forgotten in Queensland – Jamie Walker writes in The Australian that barely a week after the jailing of former state government minister Gordon Nuttall — a man who spent five years around the same cabinet table as Premier Anna Bligh before she ascended to the top job — Queenslanders have received another rude reminder that the bad old days did not necessarily end with the Fitzgerald inquiry and the blowtorch it put to the Moonlight State.

Malcolm Turnbull handed a nuclear bomb – As the Coalition tears itself apart over the Rudd Government’s emissions trading scheme, energy and resources spokesman Ian Macfarlane is predicting Australia will embrace nuclear power “in the not too distant future” – Sydney Daily Telegraph

Labor unrest flows to compo reform – Traditioinal Labor Party members could bankroll an independent candidate for next year’s state election, as they are dissatisfied with their party’s handling of WorkCover – Adelaide Advertiser

Lobbyists the price you pay: developer – A prominent South Australian identity with almost 30 years’ experience in property development has warned of the influence of lobbyists within the Rann government, saying it is “the price you pay for getting developments through”, while lamenting the national trend of “paid favours in politics” – The Australian

St Kevin has no mates to look after – Annabel Crabb in the Sydney Morning Herald discovers the embarrassing truth that “jobs for the boys” under the Rudd Government is increasingly meaning “jobs for their boys”.

Economic balancing act could still end with a fall – Alan Wood in The Australian sees the improving conditions as welcome but says they may prove tricky for Rudd and Swan to manage.

Don’t kowtow to Beijing bully – Greg Sheridan in The Australian says Kevin Rudd and Malcolm Turnbull have stood up for an innocent Australian, while the academics cravenly counsel appeasement.

Our writers and publishers don’t need handouts – Michael Heyward asks in the Melbourne Age: why tamper with the one creative industry that is standing on its own feet?

Reading through the lines – Professor Allan Fels argues in the Melbourne Age that book lovers have been overcharged for too long to protect the publishing industry, with no discernible cultural benefit.

Al-Qaeda linked to terrorists behind Jakarta bombings – Sydney Morning Herald reports that the terrorist network behind the Jakarta hotel bombings received help from al-Qaeda leaders in Pakistan. Two of the country’s highest security officials have linked al-Qaeda to the blasts that killed at least nine people.

Abu Bakar Bashir’s warning: the terror will not end – The Australian

Marriott killer may have been only 16 – The Australian

Five years after capture, accused remains in Guantanamo – More than five years after he arrived in Guantanamo Bay after being snatched by US authorities and spirited away to a secret CIA prison, the alleged mastermind of the 2002 Bali attacks, Hambali, is no closer to trial – The Australian

Spot ore rates may determine steel lobby stance – The spot price of iron ore will climb in the second half of the year if the Japanese and South Korean economies recover, and this possibility may force China to accept the 33-percent discount in full-year ore rates now being offered by global miners, industry experts told the China Daily

Cashed-up NAB to cast its net – National Australia Bank is expected to use some of its $2.75 billion capital raising to fund further piecemeal acquisitions, but chief executive Cameron Clyne insists the lender is not building a war chest to fund its global expansion – Melbourne Age

Melee becomes free-for-all after ‘crazy uncle’ tirade – Joe Hockey likened Wilson Tuckey to the crazy uncle at a family wedding yesterday as the Coalition started to tear itself apart over how to deal with Labor’s proposed emissions trading scheme. Backbenchers traded insults, the Nationals split from the Liberal leadership, and the Prime Minister, Kevin Rudd, declared his opponents a divided rabble as they sparred over when and if it should negotiate with Labor over the legislation – Sydney Morning Herald

The Coorong is dead but can be revived – Melbourne Age