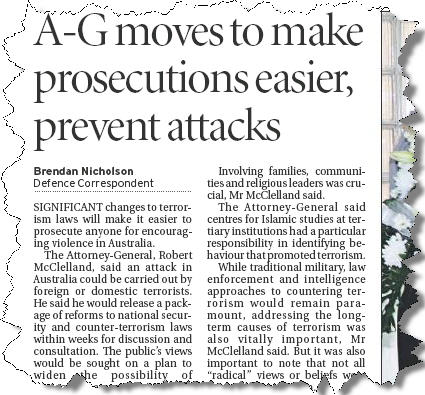 A-G moves to make prosecutions easier, prevent attacks – The Attorney-General, Robert McClelland, said last night that within weeks he would release a package of reforms to national security and counter-terrorism laws for discussion and consultation – Sydney Morning Herald

Inside Java’s production line of terror – The Australian

In bed with the enemy – how Rudd keeps his critics quiet – Phillip Coorey in the Sydney Morning Herald writes how Kevin Rudd has made an art form of promoting conservatives to boards and key policy positions as a method of disarming his critics. 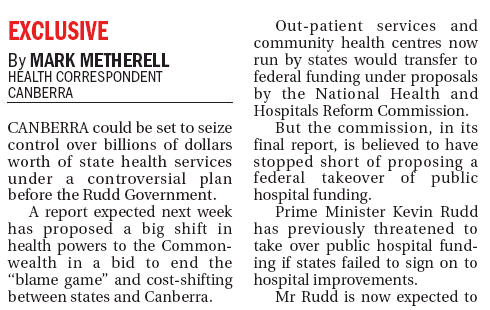 Recovery is on the way, says RBA board – Melbourne Age

China pulls films out of festival – Melbourne Age reports the abrupt departure of the three Chinese films (Perfect Life, Petition – The Court of the Complainants, and the short Cry Me a River) – has thrown the festival’s programming into chaos with at least six sessions being cancelled.

Shanghai mayor to raise Hu concerns – West Australian Premier Colin Barnett says the mayor of Shanghai has been receptive to requests for Australian authorities to be given greater access to detained businessman Stern Hu. Mr Barnett, who has met Shanghai mayor Han Zheng during a nine-day official visit to China, said he raised the issue of the Australian Rio Tinto employee during a one-on-one meeting with Mr Zheng yesterday – Sydney Morning Herald

Lynne Kosky under pressure as government admits train hell fault – Department of Transport secretary Jim Betts, told a parliamentary inquiry that it was not Connex’s role to upgrade train air-conditioning, one of the major causes of cancellations during summer. “It was the Government’s responsibility,” he said – Melbourne Herald Sun

Make their lives count – Andrew Bolt in the Melbourne Herald Sun writes that Afghanistan was the “good” war that protesters against the “bad” Iraq war could back to show they weren’t all mush. But now that the war in Iraq has been won, suddenly that “good” war has turned “bad”, too.

PM must think like a war leader or quit field – Writes Paul Kelly in The Australian, Kevin Rudd and Barack Obama must win in Afghanistan because the alternative is unacceptable.

Be like Garrett, ditch your ideals – Janet Albrechtsen in The Australian believes Peter Garrett’s experience in approving the first new uranium project in his time as Environment Minister is an important lesson about idealism.

A mystery too many in Papua – he thick and dense tropical rainforest that covers most of the rugged and mountainous province hides not only many secrets but also inexplicable events. One of these unfortunately is a series of tragic fatal incidents – Jakarta Post

Kelly warns against regulatory overkill – Westpac chief executive Gail Kelly has warned the government not to over-regulate in response to the global financial crisis, saying more red tape could force the bank to pass on increased costs of compliance to customers – The Australian

Pay up: BrisCon calls in the debt collectors – Dozens of companies are at risk of being wound up and individual investors bankrupted as the toll road operator BrisConnections takes legal action against 135 former unit holders who failed to make payments on their units – Sydney Morning Herald