The hunt is on for terrorist master mind 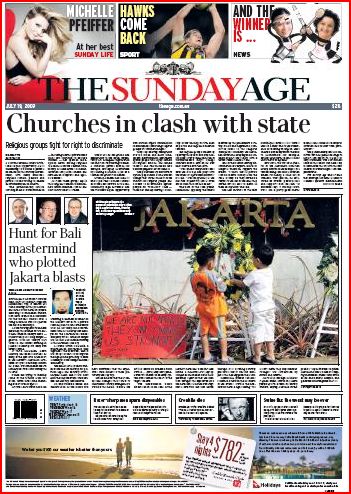 Church and state clash over equality laws – A controversial review of Victoria’s Equal Opportunity Act is threatening to become a political headache for the Brumby Government, with many churches, religious leaders, parents and private schools vowing to defend discrimination based on faith – Melbourne Sunday Age

Plight of the disappearing nest egg – Self-funded retirees have been hit hard by the global financial crisis, with one in four forced to go back to work or delay retirement – Sydney Sun Herald

Bill Shorten and Chloe Bryce G-G’s girl expecting a child – The Sydney Sunday Telegraph‘s Glenn Milne gives us a story about a politician that people will actually read. The up and coming Labor new boy and the Governor General’s daughter along with a couple of divorces.

Gordon Nuttall asked Anna Bligh to help roll Peter Beattie – Brisbane Sunday Mail reveals that had Gordon Nuttall’s ego-driven political plan come off, he could be sitting in the premier’s office today instead of a prison cell

Rudd is a bit player on the world stage – Piers Akerman writes in the Sydney Sunday Telegraph that Prime Minister Kevin Rudd had a short-lived and undistinguished career in the Australian diplomatic service and now we know why. He wasn’t very good at diplomacy and the prospect of working for a Queensland Labor premier, Wayne Goss, obviously seemed vastly more attractive.

Agents to face $1m fines for fake bids – The Australian consumer watchdog says real estate agencies involved in under-quoting and dummy bidding will be hit with fines of up to $1.1 million from January 1 – Melbourne Sunday Age

Tough laws snare 88,000 P-platers – The RTA has stripped almost 88,000 P-plate drivers of their licence for speeding and drink-driving in the two years since tough zero-tolerance laws were introduced – Sydney Sunday Telegraph

Akerman is an expert on not being good at a job, he scores 10/10 as a dud and a fool in the slime he writes. As always his incompetence and stupidity is supported by News Ltd, they excell in employing has been, tired, over weight, lazy up them selves writers. Akerman is contempt in human disguise.

The headline “The hunt is on for the terrorist mastermind” is repulsive and offensive. Please, please, please; stop referring to the perpetrators as “masterminds”. Do not award them that status. Every attack in the last few years has included this term. Ian Fleming used the term for his villains in the James Bond novels. These people should not be placed in the same league, they are not eligible for such notoriety. Label them as what they are: murdering scum. It doesn’t require a mastermind to perpetrate such pointless crimes against innocent people.
The ‘war on terror’ is a misnomer similar to the ‘war on drugs’. Pointless political rhetoric – again !