Therese Rein on the PM’s sleep and her own prayers

Terror experts warned hardliners would bomb Western targets – Analysts Noor Huda Ismail and Carl Ungerer, of the Australian Strategic Policy Institute, warmed two days ago that leadership tensions within JI and the release from prison of more than 100 of its members raised the possibility that they would try to re-energise the organisation through attacks – Melbourne Age

Sanctuaries no longer ‘impregnable‘ – The concept of safe luxury hotels has been literally blown apart, writes Tom Allard in the Sydney Morning Herald

Attacks on big names guarantee coverage – It is a habit that must keep hoteliers awake at night. Why do terrorists target big luxury establishments such as Jakarta’s JW Marriott and Ritz-Carlton? Global media coverage guaranteed by attacks on exclusive hotels has provided an incentive for terrorists to adopt this tactic, terrorism analysts say – Sydney Morning Herald

Camera captures Jakarta bomber in a suit and cap – The Australian

Fugitive Malaysian’s hand in assault – Patrick Walters writes in The Australian that it is far too early to be definitive but yesterday morning’s double bombing in Jakarta bears the carrying card of Noordin Mohammed Top.

Savage blow to heart of a society – Greg Sheridan writes in The Australian that the terrorist bombings in Jakarta are a savage blow against Indonesian democracy and society that demonstrate the ferocious resilience of Islamist extremism as a motivating ideology, and the terrorist groups that give life to it.

Deadly past – History of bombings in Indonesia – Melburne Herald Sun

Mystique of the Steel Curtain – While shouting at the Chinese is likely to worsen Stern Hu’s situation, Beijing may be in the mood to prolong the agony. Phillip Coorey and John Garnaut report – Sydney Morning Herald

3 hours’ sleep is all he needs – Annabel Crabb discovers in an interview with the PM’s wife Therese Rein in the Melbourne Age that Kevin Rudd can get by on as little as three hours’ sleep a night and he’s never raised his voice to the children. The same story in the Sydney Morning Herald

Straight shooter’s steady rise – Michell Grattan writes in the Melbourne Age of how, as much as anything, Greg Combet has reached the top of the ’07 class through sheer competence. From the moment he arrived in Canberra, his star has burned brightly.

Minister used China trip to help ALP donor – Federal Agriculture Minister Tony Burke is listed as an honorary adviser to a Chinese-Australian businesswoman who donates to the Labor Party and convinced him to use a ministerial visit to Beijing to promote her cause. Mr Burke is one of four Labor MPs involved with the China Australia Co-operation Society, an organisation established by Brisbane developer Deborah Lei and run out of her company offices, as a means of promoting Chinese medicine – The Australian

Reality rumples cocky defendant Gordon Nuttall – Andrew Fraser writes in The Australian of two nights in the watch-house being enough of a reality check for Gordon Nuttall.

Prestige home prices tumble 40pc – The Australian gives examples of the crash in the prestige property market, which has plummeted up to 40 per cent from the boom years.

O’Farrell derails metro by stealth – The NSW Opposition has vowed to scrap work on the $5.3 billion CBD Metro project if it wins office in 2011 – Sydney Morning Herald

Elections and by elections

The experiments we had to have – Ross Gittins in the Melbourne Age says that without quite realising it, we’re in the middle of two interrelated macro-economic experiments. The first is: what happens when, in the face of an economic downturn, you apply massive fiscal and monetary stimulus upfront? Second: how much difference can be achieved by making an effort to manage consumer and business confidence?

On the borderline – Shaun Carney says in the Melbourne Age that Peter Garrett Garrett’s in a box marked “greenie-leftie rock star” and he’s expected to stay in it.

Uranium export is the first step to war – Helen Caldicott in the Melbourne Age argues that while it is helpful and hopeful that US President Barack Obama is engaging with the Russians in specific dialogue aimed at reducing nuclear weapons after eight fallow years of the Bush administration, it is obvious that the urgency of the threat of nuclear war is little appreciated by world leaders.

Voters need something more than blogs – Lenore Taylor in The Australian

The brutal, thriving industry that is the modern Garrett hunt – Annabel Crabb asks: was ever a politician easier to skewer? – Sydney Morning Herald

Who killed Drew Grant? – A week into the investigation, in which 14 people have been interviewed and a huge manhunt has been launched, police appear to have made little headway in identifying the killers… Yet, intriguingly, investigators have all but ruled out the separatist fighters from the Organisasi Papua Merdeka (OPM), or Free Papua Movement, who are invariably blamed by Indonesian authorities, often dubiously, for any violence that takes place in Papua, the restive Indonesian province where Freeport is situated – Melbourne Age

Uighur leader will take her case to Canberra – The unofficial leader of the Uighurs, Rebiya Kadeer, will use a visit to Australia next month to urge the Government to take a stand over China’s violent repression of demonstrations in her homeland and to take the remaining Uighur detainees from Guantanamo Bay – Sydney Morning Herald

Financial planners paid 230% bonuses – At the height of the boom, executive financial planners within Westpac were told they could earn commissions of $350,000 on top of their base salary of $150,000 – or a 233 per cent bonus – from selling investment products – Melbourne Age

Domestic tourism set for horror year – Tourism Forecasting Committee says that domestic tourism will record its worst year since the ’90s with the number of nights spent away from home falling to 261 million – or 16 nights per person – a drop of 13 per cent on the peak of 2002. More than $2.5 billion on accommodation, meals, tours and attractions will be lost this year alone, forecasts from the federal body show – Sydney Morning Herald 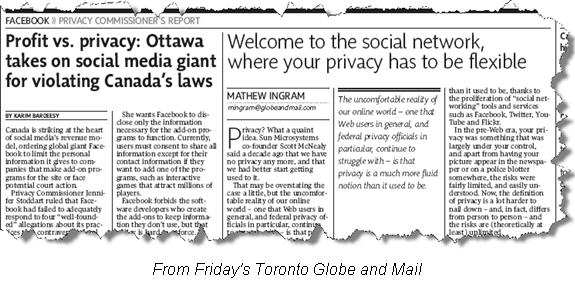 Welcome to the social network, where your privacy has to be flexible – The uncomfortable reality of our online world is that privacy is a much more fluid notion than it used to be – Toronto Globe and Mail

Ottawa takes on social media giant for violating Canada’s law – Canada is striking at the heart of social media’s revenue model, ordering global giant Facebook to limit the personal information it gives to companies that make add-on programs for the site or face potential court action – Toronto Globe and Mail

Neale to give bulk of fee to searchers – English backpacker Jamie Neale is said to be planning to donate more than half of the fee – believed to be $200,000 – he is being paid by Channel Nine’s 60 Minutes to the emergency services that searched for him during the 12 days he was lost in the Blue Mountains – Sydney Morning Herald

Canada will have enough flu vaccines to share – Unique deal with supplier means Canadians will get the shot – and there will be excess supply for countries in need, health officer says – Toronto Globe and Mail