Swine flu to the front as it spreads speedily

What the media is reporting this morning. 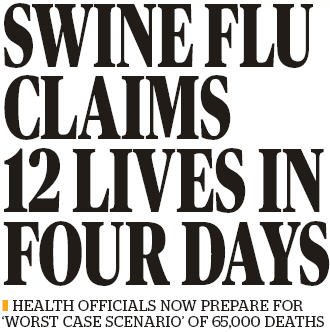 They are not yet sending their readers to  panic stations but newspaper editors around the world are getting interested in swine flu again as deaths keep rising.  The headline in the final edition of the London Evening Standard, one of the few remaining afternoon papers published in a major city anywhere, gives the flavour. 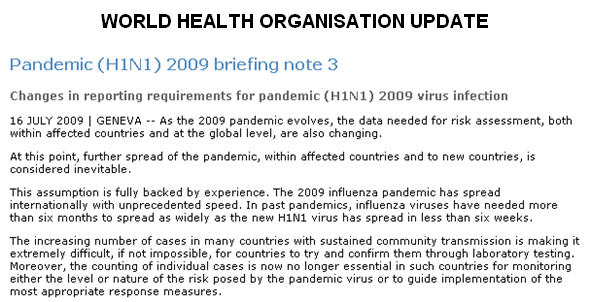 Cheaper luxuries as basic necessities soar – researchers from the Reserve Bank have gone back 16 years and discovered in aggregate the price of manufactured goods “has barely changed” since 1993. But prices for basic necessities – food and beverages – and tobacco have soared around 90 per cent since 1993, climbing about 4 per cent a year – Sydney Morning Herald

China’s growth of 7.9pc to rescue world and local economies – The Australian

Currency play nets $200m – The Reserve Bank has made at least $200 million profit in the past two months by trading the Australian dollar and taking advantage of the currency’s volatility, in a move that could improve the government’s fiscal position – The Australian 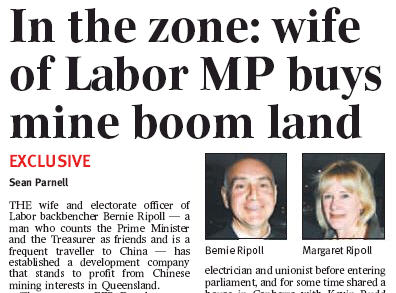 In the zone: wife of Labor MP Bernie Ripoll buys mine boom land – The wife and electorate officer of Labor backbencher Bernie Ripoll – a man who counts the Prime Minister and the Treasurer as friends and is a frequent traveller to China – has established a development company that stands to profit from Chinese mining interests in Queensland –  The Australian

Suburban sprawl costs billions more – Plans to build thousands of homes on Melbourne’s fringes will cost Victorians around $40 billion more than if they were built in existing suburbs, a new State Government report shows – Melbourne Age

Minister moves to buy back Islamic school site – An ALP-dominated western Sydney council has lobbied the NSW Government to prevent an Islamic school opening in its area, despite Land and Environment Court approval for the development. This week Education Minister Verity Firth ordered the Education Department to negotiate to buy the site but denied the council’s letter played a part in her decision. The land was now needed for a school for disabled children, she said – Sydney Morning Herald

Overseas students in limbo as college collapses – The Australian

We need nuclear-powered subs to patrol Asia: lobby – The Navy League says Australia’s 12 new submarines should be nuclear-powered to give them the range and speed to carry out extensive patrols off North Asia – Sydney Morning Herald

Clock ticking for weakened leader – Dennis Shanahan in The Australian believes Rudd should be under pressure on several issues but it’s Turnbull who is struggling.

Change your tune, Peter – Andrew Bolt in the Melbourne Herald Sun says Peter Garrett’s excuse – that he’s now a Labor minister, obliged to toe the collective Labor line – doesn’t cut it with him.

China growth soars to 8pc on stimulus package – The Australian 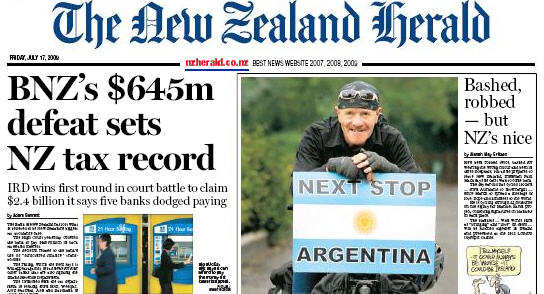 BNZ’s $645m defeat sets NZ tax record – The Bank of New Zealand has lost what is believed to be New Zealand’s biggest tax avoidance case. The ruling, which the BNZ says it will appeal against, is bad news for four other banks that are also fighting the Inland Revenue Department. 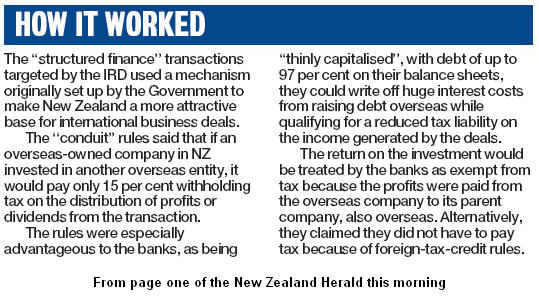 The combined sum the tax department is seeking from BNZ, Westpac, ANZ National, ASB and Rabobank is about $2.4 billion – New Zealand Herald

Bloodiest month in Afghan conflict – July is shaping up as the deadliest month of the Afghan war for US-led international forces, with the number killed already matching the highest full-month toll of the nearly eight-year conflict – The Australian

CIT on the brink after bail-out talks fail – Shares in CIT, the embattled US small-business lender, plunged more than 70 per cent on Thursday after the failure of government bailout talks prompted growing fears of a bankruptcy filing. If the group were to file for Chapter 11 protection, it would be the fourth-largest bankruptcy by assets in the US. However, restructuring experts say it could eventually end up in liquidation, given CIT’s difficulty in attracting additional funding and the lack of obvious white knights – London Financial Times 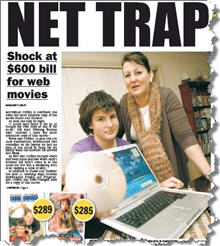 Net Trap – Shock at $500 bill for web movies – Downloaded on to student Jack Featherston’s laptop it cost $289 in internet charges. At Big W it would have been $9.99 – Geelong Advertiser 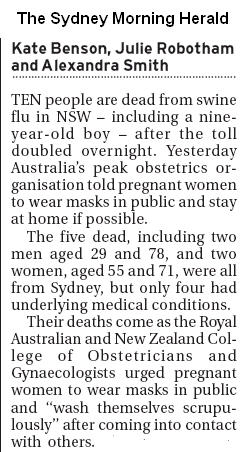 Swine flu claims 12 lives in four days – The Government’s chief medical officer Sir Liam Donaldson said 26 people had died in England and three in Scotland since the epidemic began. Health officials are now preparing for a “worst case scenario” of 65,000 deaths this year in what they fear may only be the first wave of the disease.They believe 30 per cent of the population could be infected and expect 0.35 per cent of those people to die – London Evening Standard

Like the Dickens – seven years in court at $15m, in search of an apology – Richard Ackland in the Sydney Morning Herald gives us a rattling good legal yarn

State politicians debate camel eating – In proof proof the big issues are on the menu at State Parliament, MPs have considered whether the state should eat its feral camel population – Sydney Daily Telegraph

Well surprise surprise, Andrew Bolt in the Melbourne Herald Sun says Peter Garrett’s excuse – that he’s now a Labor minister, obliged to toe the collective Labor line – doesn’t cut it with him.
Of course it doesnt Andy pand, anything associated with Labor doesn’t meet your bigoted standards. Fortunately apart from the hundred or so dedicated followers on Bolts blog, who follow his every absurd word as if he was another Jim Jones, the rest of the country treat Bolt as the idiot crank he is.