Tales of bribery and corruption aplenty, from China and Queensland, in our pick of the morning's media.

Iron ore rises during spy saga – If China’s arrest of mining and steel company executives was designed to spook iron ore prices lower, the move has backfired hopelessly. The spot market price for iron ore has risen by 10 per cent since China’s crackdown on what it alleges is bribery, corruption and espionage in the country’s iron ore industry – Melbourne Age

World is watching, Kevin Rudd tells Beijing – Kevin Rudd has toughened his rhetoric towards Beijing over the Stern Hu affair, warning that the world will be watching and emphasising that China has significant economic interests at stake in Australia – The Australian

Hu conviction ‘near inevitable’ – The Australian finds experts experts on the entwined Chinese legal and political systems who say the government’s only realistic chance to help the detained Rio Tinto executive would come after his sentencing. This is unlikely to happen until the second half of next year.

Chinese burn holds more heat than fire – Ian Verrender writes in the Sydney Morning Herald that China’s heavy-handed, even brutal, approach to what should be a commercial dispute has stunned the business world.

Reality strikes 36 times – Andrew Fraser and Michael McKenna of The Australian write of the convicted former minister who right to the end thinks he did not do anything wrong. Read it and marvel at the mind of a politician. 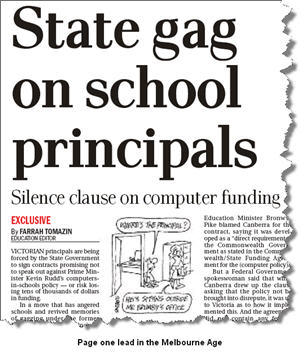 Pay cuts, unpaid leave ease bottom lines – A holiday without pay or a pay cut? While workers at Bendigo Bank have been asked to take 10 days of unpaid leave, those who took a voluntary pay cut at Intrepid Travel in January have just resumed full pay and conditions – Sydney Morning Herald

Author subsidies may not be worth reading about – To the dismay of writers, publishers and small booksellers, on Tuesday the Productivity Commission recommended removing restrictions on book imports to help make them cheaper – Sydney Morning Herald

Lawyers threaten a court walkout – West Australia’s Aboriginal Legal Service has threatened to withdraw its lawyers from a string of courts, saying it cannot cope with the number of Aborigines being hauled before them – The Australian

Rees offers faint support for lunching minister – The Premier, Nathan Rees, said it was up to the minister Ian Macdonald, dubbed “Sir Lunchalot”, to justify close to $150,000 he spent on accommodation, food and drink for a wine advisory council he established – Sydney Morning Herald

NSW has been deflowered by Nathan Rees – NSW Premier Nathan Rees has replaced the waratah with the national flower of India, the lotus in what the Sydney Daily Telegraph is calling he latest – and maybe the greatest – embarrassment yet for the State Government.

Something is rotten in the Sunshine State – Jamie Walker in The Australian says Gordon Nuttall’s conviction yesterday is far from the end of this very Queensland story of greed and corruption. There is something rotten here, and it reaches beyond a single minister turned bad.

Skid marks of Utegate overrun carbon fight – Alan Wood in The Australian maintains it would be mad to legislate before Copenhagen, but asks will Turnbull dare face a double dissolution?

Death a reminder of nuclear’s deadly power – Larry Buttrose in the Melbourne Age says there are much safer ways to reduce our reliance on fossil fuels.

Rudd wants coal to ignite greenhouse scheme – The Federal Government will hold talks with the coal sector today as it tries to enlist industry support for its emissions trading scheme, the vote on which is less than a month away – Sydney Morning Herald

Rees caught pussyfooting on panther sightings – Not only does Nathan Rees believe the elusive fanged feline exists, but so do government scientists who want warning signs to be erected to keep children safe from the clutches of the cat’s claws – Sydney Morning Herald

Kevin Rudd and Al Gore in video to up pressure on Malcolm Turnbull – Soon after the former presidential candidate Al Gore left Kirribilli yewsterday, a video of his chat with Kevin Rudd appeared on the PM’s homepage. The move, aimed at building pressure on Mr Turnbull ahead of the vote on the government climate-change legislation in the Senate next month, is expected to be the first salvo in a new hi-tech assault on the voters in the name of “direct engagement” – The Australian

On the swine flu front line – one of the six severely ill people in NSW suffering swine flu, fighting for her life on a cardiac bypass machine, the woman is suffering from respiratory failure – Sydney Daily Telegraph 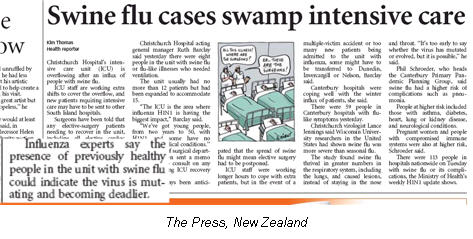 if the chinese need some pointers on how to put on a show trial
in relation to charges of commercial corruption and bribery
they would need look no further than the AWB royal commission
for instruction.
Send Cole to china……