As swine flu stories return to page one of the world’s newspapers, the World Health Orgnaisation’s latest update still describes the pandemic as “moderate”. The WHO says most patients are experiencing uncomplicated, self-limited illness. Some groups such as pregnant women and persons with asthma and other chronic conditions such as morbid obesity appear to be at increased risk for severe disease and death from infection. Since the spread of the pandemic virus is considered unstoppable, the WHO says vaccine will be needed in all countries. 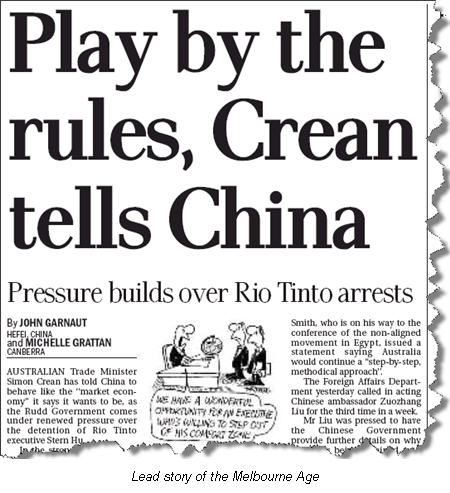 Who’s on Hu? Ministers to take turns on ‘spy’ case – The Australian says a revolving door of acting foreign ministers will oversee the Stern Hu arrest crisis because Foreign Minister Stephen Smith is in Cairo meeting Third World leaders and Kevin Rudd is on “informal leave”.

All losers as Australia hits China’s brick wall – Jennifer Hewett writes Kevin Rudd has arrived back in Australia minus a road map on how to extricate Stern Hu or his own government from the messy unravelling of the relationship with Australia’s most important trading partner. Beijing is clearly less interested in solving the problem or even limiting the fallout than it is in making a very brutal point – The Australian

Magic dragon grows into menacing bully – Michael Stutchbury in The Australian says Australia’s lucrative relationship with China has locked the two countries in a prisoner’s dilemma.

Grumpy dragon rears its head – Matthew Stevens in The Australian says it is clear that Hu’s detention is a naive, self-defeating product of a layer-cake of Chinese frustration. China is grumpy at Rio Tinto; irritated by official Australia’s ambivalence to investment here by China’s state-owned enterprises; anxious about resource security and its reliance on imported raw materials; disappointed at the lack of influence over price delivered by its buying might; and plainly impatient at the internal political and social dislocation caused, in part, by the embrace of Western commerce.

Malcolm Turnbull’s leadership is ‘terminal’ – For the third Newspoll survey in a row comparing Liberal MPs for the leadership, Mr Turnbull has finished behind Peter Costello and is now clearly behind the opposition Treasury spokesman, Mr Hockey – The Australian

Howard man spins into state politics – One of of the nation’s best and most experienced political spin doctors is back on the job in South Australia. For more than a decade, Tony O’Leary was a key member of John Howard’s highly effective spin team – The Australian

New role handed to prosecutions chief – West Australian Director of Public Prosecutions Robert Cock QC will leave his role within weeks to become special counsel to the state government, overseeing reform in the public sector and the Corruption and Crime Commission – The Australian

Industry a study in shams and scams – The Australian reports that a lust for high-dollar Indian students has led to a thriving black market in sham marriages, forged English language exams and bogus courses, and turned a once-respected international education sector into a recognised immigration racket.

Not a lot to crow about for Liberals – Dennis Shanahan in The Australian searches for good news in the Newspoll figures but concludes the truth for the Liberal Party is that these numbers, and those of the other published polls, have convinced some within the opposition that Turnbull’s leadership is “terminal”. And, a rise of a few percentage points from a record low satisfaction rating is not going to change their opinion.

Real rival for Libs’ poisoned chalice – Peter van Onselen argues in The Australian that the news that more voters want Joe Hockey to lead the Liberal Party than Malcolm Turnbull is devastating for an incumbent leader.

Thanks due to monetary policy – Tony Maley in The Australian says objective economic analysis based on standard textbook theory suggests that fiscal policy has played a significantly less important role in cushioning the impact of the global financial crisis on the economy as compared with the role played by monetary policy through interest rate reductions and associated exchange rate depreciation.

Displaced families being transported back to Swat – Dawn, Pakistan

Boiling the Frog – Paul Krugman in the New York Times started thinking about boiled frogs recently as he watched the depressing state of debate over both economic and environmental policy. These are both areas in which there is a substantial lag before policy actions have their full effect – a year or more in the case of the economy, decades in the case of the planet – yet in which it’s very hard to get people to do what it takes to head off a catastrophe foretold 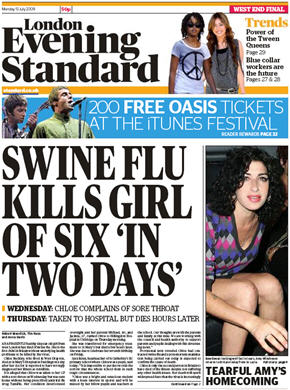 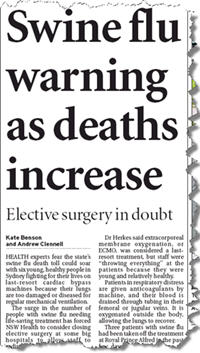 London school child and GP die of swine flu – An apparently healthy six-year-old London girl has died of swine flu within hours of being taken to hospital. A doctor in Dunstable in Bedfordshire – a hotspot for swine flu – has also died after contracting swine flu – London Evening Standard

Swine flu warning as deaths increase – Health experts fear the state’s swine flu death toll could soar with six young, healthy people in Sydney fighting for their lives on last-resort cardiac bypass machines because their lungs are too damaged or diseased for regular mechanical ventilation. The surge in the number of people with swine flu needing life-saving treatment has forced NSW Health to consider closing elective surgery at some big hospitals to allow staff to redirect resources – Sydney Morning Herald

Petrol bonanza – Shoppers are racing to cash in on a Coles and Safeway petrol price war, saving up to 40c a litre – Melbourne Herald Sun

Just put up with pain of childbirth: UK professor Dr Denis Walsh – Melbourne Herald Sun reports a leading male midwife saying women should embrace the full pain of childbirth to bond with their babies instead of resorting to anaesthetic drugs

The article in The Australian by Matthew Stevens (“Grumpy Dragon Rears Its Head”) is jaw-dropping funny. To quote:-
“What value claims of a healthy diplomatic and commercial relations when an Australian citizen is held without charge or routine consular assistance?”
– Well that newspaper has certainly changed its view, in light of their former attitude to the detention and rough treatment of David Hicks and Mr Habib. Clearly also, the newspaper has set higher standards for PM Rudd – he is supposed to “secure the release” of Mr Hu after a week or so of detention; despite allowing former PM Howard to attempt the same for Hicks and Habib but taking several years – clearly Mr Stevens must think Australia’s special relationship with China is much stronger than that with the USA. Also, Mr Stevens in unconcerned about the guilt or innocence of Mr Hu. Does he have any evidence that nothing untoward has occurred? If so, please provide it to us. Or is bribery and industrial espionage to be ignored (assuming that this is the core of the suspected crime?). In view of the News Ltd’s role in spying on people in the UK, perhaps this is a new corporate policy being advanced…

I suggest that the ‘equivalent’ argument is neither moral nor apposite here but execrable.
Cavitation is not alone; sad to see Leigh Sales try on the same facile leftist dishonest loaded questioning of Liberal Andrew Southcott last Thursday night.