The Obama perve that wasn’t

In a photo that made its way around the world, Obama appears to check out a woman with a lovely behind at the G8. It wasn't really a true moment (as video later showed) but that didn't stop news outlets.

Reuters photographer Jason Reed must be pleased with the nanosecond he caught on camera at the G8. It’s made its way around the world.

In the photo, US President Barack Obama appears to check out a woman with a lovely behind — later revealed as 17-year-old junior G8 delegate Mayara Tavares — while French Pres Nicolas Sarkozy looks on with the bemused look of a proud parent. The Guardian has it here.

“The American President is an Ass Man, Apparently” announced Gawker while also noting the fun that Matt Drudge was having with the pics. To wit:

The New York Post was revelling in it too:

“Obama wasn’t the only head of state getting Yankee Doodle randy. The president got a show of support for his stimulus package from French President Nicolas Sarkozy — whose wandering eyes also couldn’t help but take in the view.”

This being world news, Australia’s weekend papers — including The Age, The Australian, The Courier-Mail — used the pic of the world’s most restrained man seeming to have a very human moment to illustrate stories about the G8’s action on climate change and poverty. Here it is in The Courier-Mail on Saturday, 11 July. 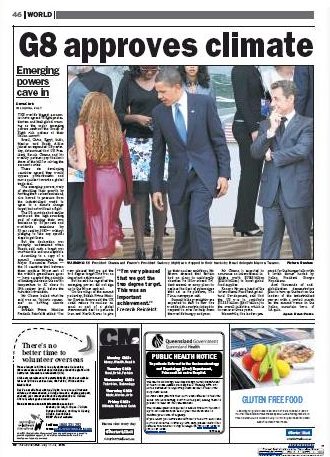 But before we buy into this wholesale, perhaps we should reflect on the possibility that — as fun spoiling as that would be — appearances could be deceiving.

In fact, they are. The video footage, revealed the morning of July 10 in America (too early to intercept Australian papers’ Saturday deadlines), tells a fuller story in which the two leaders return to type: Barack Obama, gentleman; Nicolas Sarkozy, beauty appreciator. 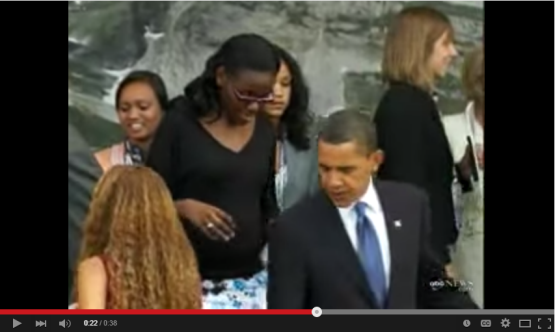 Still, it was a great shot, even if it purported to show what turned out to be a fictitious moment.

And no-one seemed too concerned that the shutter might have closed on a moment that wasn’t exactly representative of the true picture. In fact, you get the sense that news outlets willingly turned a blind eye to that exact possibility — any news editor would have suspected as much.

Then again, perhaps it’s only human to hope for Obama flaws.