The best of this morning's media

THE PICK OF THIS MORNING’S STORIES 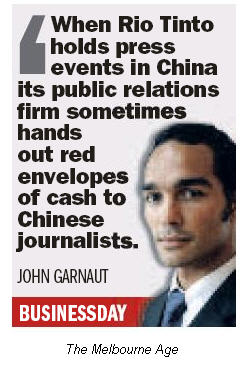 Beijing ramps up the humiliation – Greg Sheridan in The Australian says if Rio Tinto executive Stern Hu is not released from a Chinese prison soon, the pressure on Foreign Minister Stephen Smith and Kevin Rudd to intervene directly with their counterparts will become irresistible. If it reaches that stage, their intervention will probably be ineffective, and that would be even more humiliating.

Case calls for Kevin Rudd to ring his China plate – argues Glenn Milne in The Australian. Without the laying of serious charges against Stern Hu, followed by a transparent and just trial process, China is in the wrong. Thus far this appears to be an unprovoked and unreasonable act that has the potential to open a significant diplomatic and trade rift between China and Australia.

China plays from a different rule book – The Australian argues in an editorial that China has undermined its claim to be a modern industrialised nation and a safe place to do business with its authoritarian handling of spying and bribery allegations that have landed senior Rio Tinto iron ore executive Stern Hu, a Chinese-born Australian, in prison without charge.

Minister was told of surge – The Rudd Government was warned last October to prepare for a flood of boat people heading for Australia. But it took seven months to fund new measures to deal with the problem — and the boats are still coming – Melbourne Herald Sun

‘No Tasers’ for deadly police – Victoria Police has failed to tackle the shoot-to-kill culture that made it the nation’s most deadly force, and its officers should not be trusted with Taser stun guns, the state’s police watchdog has declared – The Australian

Better days to arrive ahead of schedule, just mind the landing – Ross Gittins in the Melbourne Age says a quicker-than-expected economic recovery will pose new conundrums for Kevin Rudd and Malcolm Turnbull.

Broadband madness: how to waste $43bn – Kenneth Davidson in the Melbourne Age

Military weapons used to kill Australian in Papua – As Drew Grant’s family yesterday struggled to come to terms with the 29-year-old father’s death near the Freeport McMoRan mine in Indonesia where he worked, Foreign Minister Stephen Smith said two officers from the Australian Federal Police had arrived in Papua from Jakarta to assist the Indonesian national police with the investigation – The Australian

No need to fear our neighbour to the north – Geoff Strong in the Melbourne Age writes Indonesia is no longer the bogyman, but a bona fide democracy.

Stokes ready for next assault in ongoing media battle – The Australian

Murray costs soar as rescue plan flags – Canberra has pumped more than 10 times as much money into Murray-Darling buybacks in 2008-09 than a year earlier and overshot its water purchase budget by almost half, despite underspends on water-saving infrastructure – The Australian

Stokes-Packer waiting game – Mark Day in The Australian says Packer has bet big on building up his casino assets in Macau and the US. Seven Network chief Stokes has placed his bets on winning a stake in pay-TV. In the end it won’t be a flip of a card or the roll of a dice that decides the outcome. Stokes’ gambit will be decided on price.

After the television drama, something to eat – reality TV still has bite. Alongside the drama heroes of 2009, Channel Nine’s Underbelly and Seven’s Packed To The Rafters, ratings have cemented the hit status of Ten’s MasterChef Australia – Sydney Morning Herald

The curse of tolerating pain – Volunteers withstood pain for longer when they swore compared with when they used anodyne words, in a study at Keele University in the English Midlands – Melbourne Age 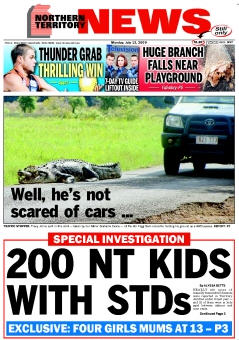 Four girls mums at 13 – The AMA fears the numbers could get worse under the Territory’s mandatory reporting laws that require anyone to report suspicions of sexual activity of youth under 16. “They’re going to be less likely to attend medical practitioners for contraceptive advice,” AMA president Dr Paul Bauert said – Northern Territory News

Why wasn’t she saved? – Mel bourne Herald Sun tells the story of a toddler now on life support after being bashed, days after welfare officers were told of an earlier attack.

Principal wins backing of government and public – Principals return to work today with unprecedented support to crack down on bad student behaviour, after the Government and the public backed a hardline stance – Brisbane Courier Mail

Government scraps $20 pokie limit – The Courier-Mail has learnt the Government quietly scrapped the $20 note limit for hundreds of machines in recent weeks, despite its own research showing the cap cut problem gambling. The green light for $50 and $100 notes in premium play areas of casinos also comes despite a Cabinet Minister previously labelling the use of large notes in pokies as “disgraceful”.Motor sport