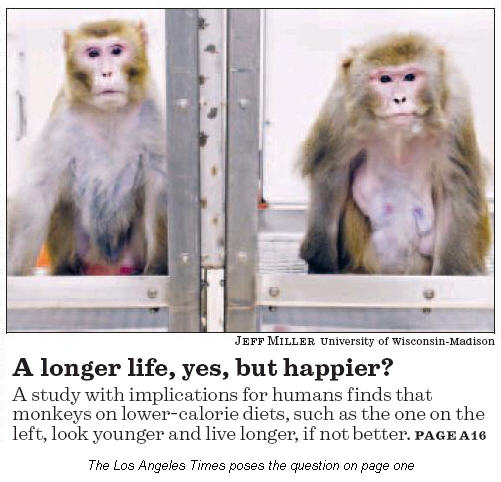 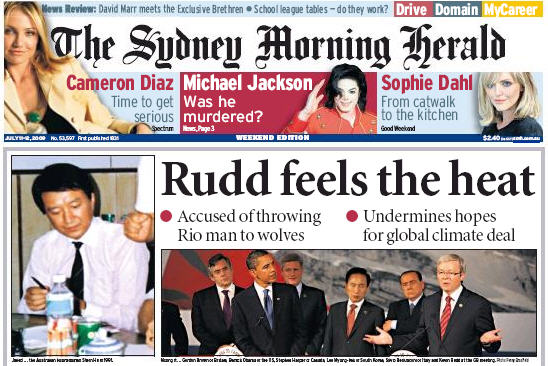 China crucible – Rowan Callick in The Australian on events that suggest the world’s last great one-party state already may be testing the limits of its formula for success.

Beijing’s intimidation – Greg Sheridan in The Australian sees Chinese government sending a message of crude intimidation and deep displeasure against Australia with the arrest of Rio Tinto executive Stern Hu, an Australian citizen, in Shanghai.

Face-saving exercise puts a man in jeopardy – The Chinese Government has probably arrested Stern Hu in retaliation for the breakdown of its iron ore negotiations with Rio Tinto, a Shanghai expert in the concept of face in Chinese business dealings says – Melbourne Age

Seeing red over Rio – Malcolm Maiden in the Melbourne Age says Rio’s competitors can expect a boost in China, but the complex nature of Chinese culture is still to play out.

A work in progress – Midway through his first term, the Prime Minister reflects on the economic hardship that allowed him to recast himself. He spoke with Peter Hartcher of the Sydney Morning Herald

Politicians caught with pie on faces – prominent politicians, Anthony Albanese and Frank Sartor, have been left red-faced after attending the re-opening of Rockdale’s brahim Lebanese Pastry last Saturday in their positions as the state and federal members. What they did not know was that one of the Ibrahim brothers, who have owned the shop for almost three decades, has a son who was recently charged with the murder of a Kings Cross identity, Todd O’Connor – Sydney Morning Herald

Inquiry call for state’s judiciary – Victoria’s Chief Magistrate has called for a commission to examine complaints about judges and magistrates. This follows concerns about why a magistrate’s speeding ticket irregularities went unquestioned for a year – Melbourne Age

Nine fines lay bare a flawed system – Nick McKenzie and Fergus Shiel in the Melbourne Age examine the case of magistrate Carmen Randazzo resigned after a report found she had been caught speeding nine times in her departmental car in early 2008 and had nominated as driver her father – Italian senator and Melbourne identity Antonino Randazzo, who was not entitled to use the taxpayer-funded vehicle – on two of these occasions, even though he was overseas at the time.

Libs in row over school rank tables – NSW Opposition Leader Barry O’Farrell has hit back at Brendan Nelson, urging the former federal education minister to “focus on the facts” of the school league tables debate before weighing in – The Australian

Some look for a first job, others for any job – Ross Gittins in the Sydney Morning Herald writes how the deterioration in the labour market is occurring at a relatively moderate rate.

Forget the windbags and follow windfall theory of leadership – Peter Hartcher in the Sydney Morning Herald says we don’t really know what Rudd and Turnbull stand for, only what they say they stand for.

Silver tongue, but not a Latin lover – Annabel Crabb in the Sydney Morning Herald notes that the hat the Prime Minister is quickly becoming fluent in Twitterese, the clipped young dialect of the Intertubes.

Saint Kev and a miracle economy – Laurie Oakes in the Sydney Daily Telegraph reckons the PM k nows Latin too.

Uteman revived as part of package – Dennis Shanahan in The Australian on how the Rudd Labor government is appealing to utemen, contractors it calls, with self-conscious blokeiness, “tradies”. 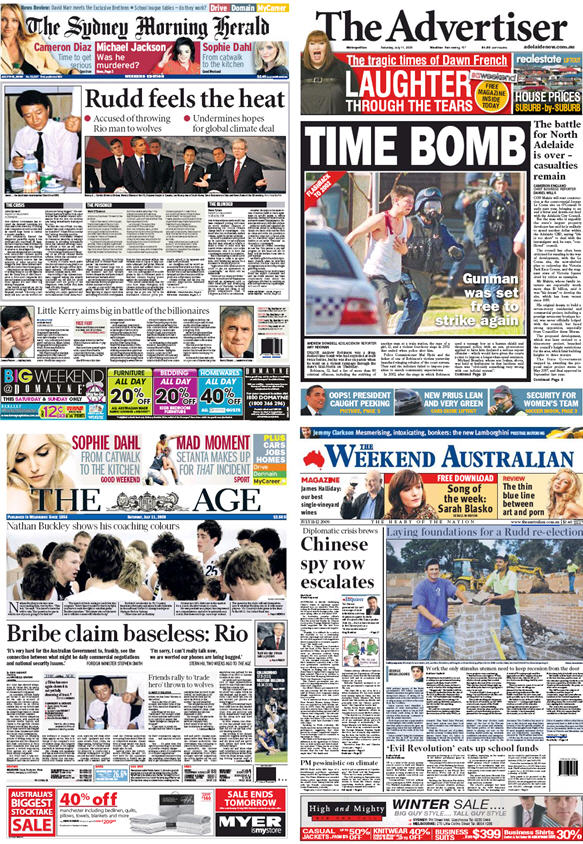 A Lesson on Warming – New York Times editorial says at the Group of 8 summit, President Obama learned how divided the world remains on global warming and how hard he will have to work to pull off an agreement.

General Motors emerges from bankruptcy – Chief Executive Fritz Henderson says the new, smaller GM will focus on customers, cars and changing the company’s culture. ‘Business as usual is over,’ he says. It will even sell vehicles on EBay – Los Angeles Times

Climate comment rains on Rudd’s victory parade – US President, Barack Obama, has urged world leaders to banish their pessimism about thrashing out a climate-change deal with developing countries, heralding a new era for the US and citing Australia’s carbon capture project for plaudits. However, just hours later Mr Rudd was overheard pouring cold water on the prospects for a deal at the Copenhagen talks in December – Sydney Morning Herald

We will not pay for half a F1 GP: Brumby – Melbourne Age