The PM plays it cool but relations with China heat up 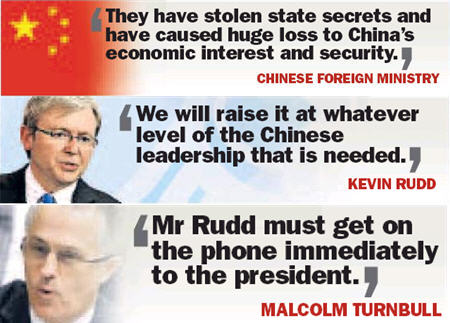 China crisis puts heat on PM – John Garnaut, Shanghai, and Paola Totaro, Rome, report in the Melbourne Age that Australia is facing a major crisis in relations with China after Beijing yesterday dug in over its detention of four employees of mining giant Rio Tinto, saying it had evidence they had stolen state secrets.

Beijing linked to Rio arrest – John Garnaut Sydney Morning Herald Correspondent in Shanghai writes that the Rudd Government has no channels for dealing directly with the powerful Chinese spy agency that detained the Australian Rio Tinto executive Stern Hu and three of his senior staff. Beijing is likely to have unleashed its power only after taking into account the repercussions, international experts say.

Who is Hu? A man of integrity – John Garnaut in the Sydney Morning Herald finds it notable that Chinese steel managers spoke up for Stern Hu yesterday even though he stands accused of one of the most serious crimes.

A lack of evidence adds to the mystery – Michelle Grattan observes in the Melbourne Age that it’s easy when you are the Opposition to be hairy-chested about how the strange case of Stern Hu should be handled. And it is tempting when you are the Government to defend a softly softly approach on the grounds that this is the best way to achieve the desired end of helping an Australian citizen.

Business world holds its breath over detentions – Malcolm Maiden in the Sydney Morning Herald writes that confusion and not a little fear are abroad in the Australian business community in China after last Sunday’s detention of four of Rio Tinto’s Shanghai-based employees. The affair could take several paths from here and most of them lead to places Rio and the Australian Government do not want to be.

Big risk in nasty business – Greg Sheridan in The Australian says that the arrest and detention in Shanghai of senior Australian Rio Tinto executive Stern Hu represents a grave crisis in Australia’s relationship with China.

For Pope Benedict, Kevin Rudd brings an apology and a crate of wine – The Australian 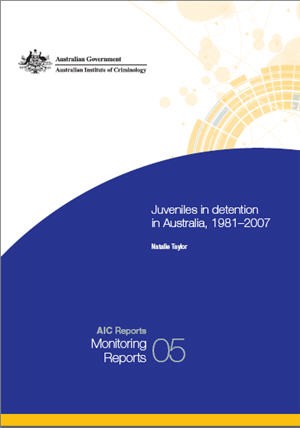 Young Aborigines 26 times more likely to be jailed in NSW – Sydney Morning Herald. The Australian Institute of Criminology report on which the story is based can be found here.

Frantic quest for asylum-seekers – Australian officials were last night frantically trying to ascertain the fate of up to 74 asylum-seekers aboard a stricken fishing boat, after Foreign Minister Stephen Smith conceded reports that the Indonesian navy had rescued the boat were wrong – The Australian

Nelson defends school league tables – Former federal Liberal leader Brendan Nelson has attacked opponents of league tables such as his NSW party colleague, Opposition Leader Barry O’Farrell, for condemning children from poorer backgrounds to “a life of mediocrity” in the belief they are unable to excel at school – The Australian

Junk the jihad, it’s jargon we need – Richard Ackland in the Sydney Morning Herald takes the mickey out of a “national roll-out of a project to promote the consistent use of language in engaging with communities on national security issues”.

Politicide or politic: Gillard and the Gaza muzzle – Jake Lynch in the Sydney Morning Herald says Julia Gillard’s don’t-mention-Gaza stance puts Australia further into Israel’s camp than any other country, including the United States.

The book price row rings too sadly familiar – Mark Seymour writes in the Melbourne Age that this championing of the rights of the consumer is grasping self-interest.

Tyranny of expectations – Dennis Shanahan writes in The Australian how the Prime Minister, Treasurer and Workplace Relations Minister are faced with a battle to reconcile those expectations with reality, one made economically difficult by the advent of the global financial crisis and the government’s response to it.

Teacher unions hold future to ransom – Michael Costa in The Australian writes that the disproportionate and hysterical campaign being run by teachers unions against the federal government’s modest attempts to reform Australian education shows how unreasonable and reactionary teachers unions have become.

Exile in the U.S. Becomes Face of Uighurs – As the global face of resistance to what she calls the worsening Chinese repression of the Uighurs, Rebiya Kadeer is displaying the tenacity and sense of destiny that drove her improbable climb inside China in decades past, from laundry girl to famed business mogul – New York Times

Uighurs lying low in brave new world – David Brophy writes in The Australian that for Uighurs across the world, the crackdown will only confirm what many have long felt, that their homeland is under a military occupation.

Kick the children out: it’s their only hope. Melanie Reid in the London Times describes as transgressive madness yesterday’s bright idea, floated by the Department for Business, Innovation and Skills, that there should be a lot less leaving home in the future. Under a “no-fee degrees” scheme, university students in England would be spared £3,225 for tuition if they opt to live at home. Ms Reid argues that if we let students stay at home, we are guaranteeing the end of the human race within a few generations

Rudd cool on G8 greenhouse pledge – saying it would mean little unless a deal could be reached with developing countries such as China and India, which criticised the plan yesterday – Sydney Morning Herald

Symbolic pledge on climate cuts – Melbourne Age reports agreement by eight industrialised powers that global warming should be limited to 2 degrees has been undermined by their inability to convince developing nations to support the aspirational target.

Nathan Rees caught out by bottled water contract – Premier’s bottled water ban has been exposed as policy-on-the-run after the discovery that much of it cannot be implemented until 2011. Up to three companies are contracted to supply government departments with bottled water until March 2011 in a contract that industry insiders say is “rock-solid” – Sydney Daily Telegraph

Royal Children Hospital doctors split over burger giant – the Melbourne Herald Sun reports that staff are split over whether McDonald’s should continue to have a fast-food outlet at the new Royal Children’s Hospital. Some doctors on the front line in the fight against child obesity are strongly opposed to a fast-food store in the $1 billion hospital’s shopping and entertainment mall. Others say fast-food outlets such as McDonald’s provide a much-needed distraction for sick children, which is acceptable in moderation.

The long, long dry: less drink, more drugs – Australia’s extended drought is having a severe impact on the mental health of farmers and their partners – but they are not turning to alcohol to drown their sorrows – Melbourne Age

The market has declared the draw the winner from day two of the Cardiff Test between England and Australia. On our Crikey Cricket Indictor the probabilities about the result now are:  England 8%, Australia 29% and the draw 63% 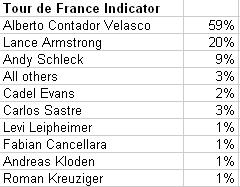 Ferrari or bust, says GP chief – Melbourne’s ormula one chief, Ron Walker, has threatened to pull the pin on the Albert Park Grand Prix if Ferrari is not on the starting grid next year – Melbourne Age