Some Chinese dangers for Australia

The best of the morning's media

It started as a small story on page one of the Melbourne Age yesterday morning which I noted in the morning news summary but did not make much of. Thankfully for Crikey readers my colleague Glenn Dyer grasped the significance of the news that Rio Tinto’s iron ore sales team – including an Australian – had been arrested by Chinese authorities in Shanghai. “Instead of grandstanding round Germany and donning his really serious look for the G8 meeting tonight,” wrote Glenn in the daily Crikey email, “Prime Minister Rudd would be better placed turning his attention to the sudden escalation of the pricing dispute between Rio Tinto and the Chinese steel mills.”

By this morning the significance of this dispute beween Australian and Chinese companies over the price to be paid for iron ore has become slightly better understood by the media. In The Age the coverage has moved from a minor spot to the page one lead, the Sydney Morning Herald gives it a good run and The Australian has begun looking at the consequences for the Australian economy.

Given the dependance of our economic health on a continuation of China’s well above world average growth rate, a squabble over the negotiating tactics of Rio Tinto with steel mills is perhaps a lesser worry for Australia than the reports of growing social unrest in China’s western region.

No doubt the tabloids, which so far have largely ignored these two Chinese yarns, will soon join the broadsheets in realising that what happens with both of them is of vital importance to Austrlians 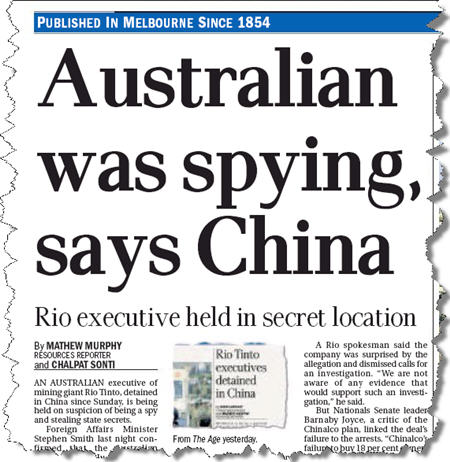 Iron ore deadlock broken in reports of a backdown – Sydney Morning Herald quotes China Business News saying the stand-off between Australia’s iron ore giants and China had been broken and the steel makers had agreed to price cuts of 33 per cent for iron ore fines and 44 per cent for the lump variety.

Australian was spying, says China – Melbourne Age reports that Australian officials continue to seek urgent access to Stern Hu, 53, who has been held since Sunday along with three Chinese Rio employees.

China holds Rio employee on suspicion of spying – The Financial Times of London reports that the allegations made by the Chinese authorities appear to be based on Article 111 of China’s criminal law statute, which states that it is an offence to provide “state secrets or intelligence for an organisation, institution, or personnel outside the country”. Cases deemed serious by the authorities carry a maximum life sentence.

Uighurs claim 400 killed in unrest in western China – The Australian

Charges a crisis for Canberra – Rowan Callick explains in The Australian how Stern Hu is not a hapless, indiscreet entrepreneur who might have strayed over a nebulous line by mistake. He is a corporate figure, Rio Tinto’s second-most senior executive in China and the head of its Shanghai office, responsible for negotiating iron ore prices and marketing iron ore into Rio’s biggest market.

China’s crackdown has world bluffed – Greg Sheridan in The Australian says violence and rioting in Urumqi, and other cities in the vast, desolate Western Chinese province of Xinjiang, demonstrate the failure of the Chinese development model for both Xinjiang and Tibet, and the crudity of Chinese rule in those two provinces. They also demonstrate the danger of the nationalism and ethnic Han chauvinism encouraged as a key way of gaining legitimacy by the Chinese state.

Fear and loathing on China’s Silk Road – As violence between Uighur and Han Chinese continues, sorting fact from rumour is hard, reports John Garnaut in Urumqi for the Melbourne Age

First woman to lead major party in SA – The Australian reports a war of words between Premier Mike Rann and newly elected Liberal leader Isobel Redmond erupted within hours of her making history as the first woman elected to lead a major political party in South Australia.

Doubts on Theophanous rape case – Correspondence that could support a woman’s claims that Labor MP Theo Theophanous raped her may have been falsified, throwing doubt on the allegations against him. Two former friends of the woman told a committal hearing in the Melbourne Magistrates Court yesterday that conversations attributed to them in letters and emails from the alleged victim never happened – Melbourne Age

Right-wing genie out of the bottle – today Australia First will announce itself as the first anti-immigration party since One Nation to gain enough members to contest a federal election. The party finished signing the 500 members on Monday and expects its application to be lodged in a fortnight – five years after it was last deregistered and four years since One Nation lost its final federal seat. Sydney Morning Herald

Truth lost in waves of obfuscation – Kenneth Davidson writes in the Melbourne Age that the cost of recycling water is being inflated to justify a desal plant.

State plays with fire – Robert Manne in the Melbourne Age says interference in the Bushfires Royal Commission has the potential to endanger lives.

Learn from leaders who dare to dream – Arthur Sinodinos in The Australian writes that indicators per se do not galvanise action, only the right policies and programs will. That is why inspiring stories of indigenous success are so important.

High Court casts shadow on Canberra’s lofty vision – George Williams in the Sydney Morning Herald writes of a landmark decision in which the High Court rejected the Commonwealth’s unrestrained view of its spending power.

Yudhoyono sweeps the board – Incumbent Susilo Bambang Yudhoyono was on course for a thumping victory in Indonesia’s presidential elections, as voters yesterday overwhelmingly endorsed another five years of his steady, reformist policies – Melbourne Age

Town’s ban is a bottler, Premier says – The State Government has followed the lead of the Southern Highlands village of Bundanoon, and moved to ban commercially bottled water in all government departments and agencies – Sydney Morning Herald

Free-to-air TV faces viewer dip – The ABC’s head of television and chairman of the industry group Freeview, Kim Dalton, has acknowledged that the free-to-air TV industry is unlikely to see an increase in overall viewers again despite the launch of up to 15 free digital channels by next year – Melbourne Age

Godwin Grech in Dogs pokie mystery – Less than three weeks after Mr Grech wrote himself into Australian political history as the central player in “Utegate”, The Melbourne Age reveals that the public servant has written his way into another political drama – this time over the Bulldogs’ plan to build a gaming venue in Melbourne’s western suburbs

Beer garden beats plants with prickles in turfing heroin – The pedestrian mall in Kings Cross that was once described as “the epicentre of drug activity in Australia” has become an alfresco drinking zone, as the City of Sydney council tries to drive away heroin dealers. Sydney Morning Herald

Tour de France – little change in the Crikey Indicator after the latest stage. 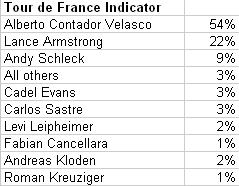 The Crikey ashes test match indicator after Day One has England with a 34% chance of winning, Ausralia at 29% with the draw the favoured result at 37%

Government can do more on school violence – Shocking levels of student suspensions from Queensland’s state schools have been revealed, with the Government admitting not enough has been done to combat violent behaviour – Brisbane Courier Mail