Our travelling man lectures the world 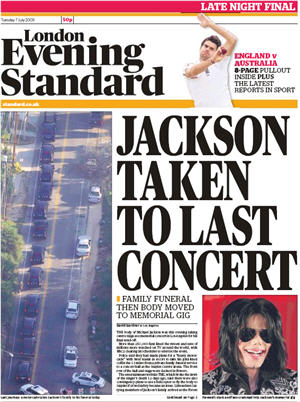 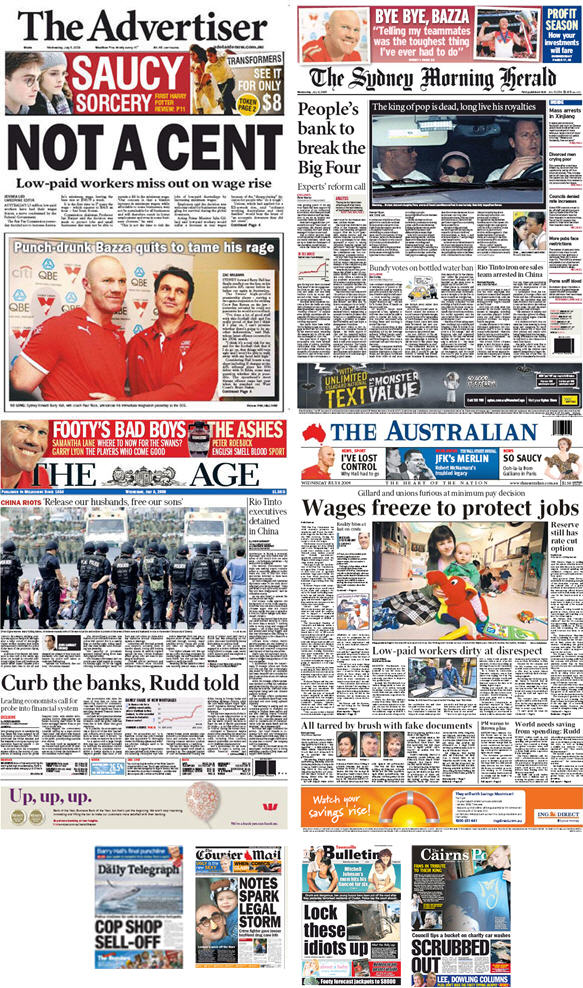 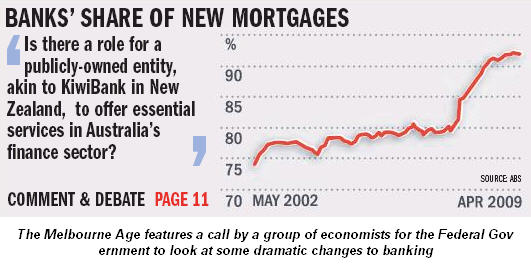 Curb the banks, PM told – The growing power of Australia’s biggest banks has been targeted by six influential economists who have petitioned the Prime Minister and the Treasurer to set up an inquiry into Australia’s financial system – the first in more than a decade – Melbourne Age 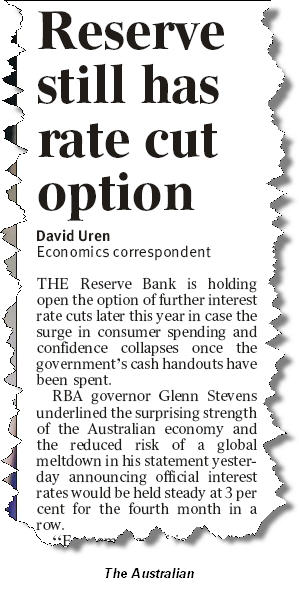 World needs to be saved from spending spree: PM – The Australian

Cash for homeless released – Canberra yesterday announced the first downpayment on its national homelessness pact with the states and territories, just hours after coming under fire for failing to deliver on the funding promised to the homeless – The Australian

It takes more than just a strong leader to win over voters – Shaun Carney in the Melbourne Age argues that People want ideas and policy and the Liberals presently have neither.

Pay freeze trades off money for jobs – Michelle Grattan in the Melbourne Age notes that the short-lived Fair Pay Commission is ending as it began: with a surprise packet. In its first decision, the commission, part of WorkChoices, delivered a bigger-than-anticipated rise. Now, as it goes out the back door, its final decision has come in at zero – below expectations.

Pay attention, or be bamboozled by bread and circuses – Ross Gittins muses about the similarities between political contests and market competition

Ruddbot’s gatecrashing upsets Papal Skills – Annabel Crabb in the Sydney Morning Herald writes that the suggestion that Kevin Rudd would be lobbying for the Mary MacKillop ticket was too much for Tony Abbott – Parliament’s best known Catholic – to bear.

A test for more humane strategy – Paul Kelly in The Australian writes that Kevin Rudd and Stephen Smith now seek to validate the deepest conventional wisdom about unauthorised boat arrivals, that the essence of the solution lies in regional agreements with our Southeast Asian neighbours.

Harper’s ruling will save thousands – Michael Stutchbury in The Australian writes it has taken a final act of principle from John Howard’s Fair Pay Commission to deliver the blindingly obvious policy truth: that it is madness to force business to pay more to employ low-skilled workers during the deepest downturn in the world economy since the 1930s.

Steady as she goes – we hope – Terry McCrann writes in the Melbourne Herald Sun that some low-paid workers might have been saved from losing their jobs.

King is dead, long live his royalties – For the many fans gathering to watch the Michael Jackson memorial service from the Staples Center in Los Angeles it was about celebrating 50 extraordinary years. But for the lawyers circling his estate, Jackson’s death meant the start of a battle to win control of a fortune worth hundreds of millions of dollars – Sydney Morning Herald

Rudd warns of second recession – Speaking in Berlin on the eve of the Group of Eight talks in Italy, PM Kevin Rudd joined British counterpart Gordon Brown to argue that it is too early for industrialised nations to pull back on fiscal stimulus measures – Melbourne Age

Russia and the USA

Obama: US and Russia not destined to be adversaries – The Independent, UK 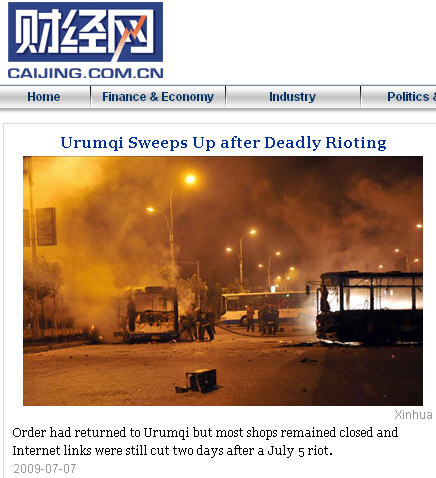 Urumqi Sweeps Up after Deadly Rioting – Order had returned to Urumqi but most shops remained closed and Internet links were still cut two days after a July 5 riot – By staff reporters Li Weiao and Zhu Tao of Caijing.com.cn

Bulgarian stress test for the Balkans – The Baltic trio of Latvia, Lithuania, and Estonia are lucky. At the end of the day, they can count on Swedish banks and the full might of the Swedish state to shield them from economic disaster.The picture is messier in the Balkans, a region with eight times the population (55m) and no obvious Big Brother at hand, and messiest of all is Bulgaria – London Daily Telegraph 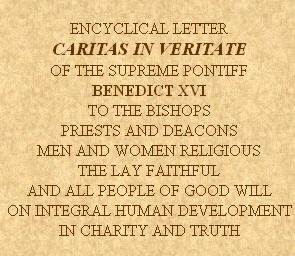 From profits to ethics: pope calls for a new political and financial world order – • Global recession caused by greed, says pontiff; • Economic crisis is ‘clear proof of effects of sin’ – The Guardian

Rio Tinto executives detained in China – the arrest of Rio Tinto’s iron ore sales team – including an Australian – by authorities in Shanghai comes against the background of recent bitter negotiations over iron ore sale contracts and Chinese anger over Rio Tinto’s decision earlier this year to abandon a $US19.5 billion merger with state-owned Chinalco – Melbourne Age

Town in bottled water ban – NSW Southern Highlands village of Bundanoon is poised to become the first town in Australia, and quite possibly the world, to ban commercially bottled water – Melbourne Age

Clean coal plant set to go ahead – a coal-to-liquids plant for the Latrobe Valley promises to produce cleaner coal, reduce greenhouse gas emissions by 40 per cent and extract thousands of barrels of high-grade oil – Melbourne Age

Coalition may talk to editors – the Sydney Morning Herald reports that State Opposition remains opposed to school league tables but could be prepared to back away from fines for newspapers that publish school results. The Premier, Nathan Rees, will reintroduce the league tables legislation to Parliament after the winter break.

The curious incident of the straight-A student – Alex Goodenough was the cleverest kid in his school – so why didn’t he get a sixth form place? Decca Aitkenhead of The Guardian talks to his family about the impact of Asperger’s

Top cop ‘caught on tape’– A leading Territory police officer was stood down after a woman work colleague secretly tape recorded conversations with him, it was learnt last night – Northern Territory News

How the Crikey indicator rates the chances: 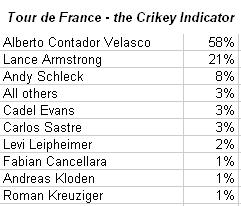 Joe Hockey is another godgobbing moron politician who should leave his nauseating religious rhetoric out of politics.
He is now godgobbing while trekking up Mt Kilimanjaro,.,telling us,on a grab to Channel 7’s Sunrise that his safety on the mountain with Koch is “now up to god”
Pathetic.
I hope the slob falls off the bloody mountain so we can then hear him further bleat out some useless prayers about how a god saved him,it was a miracle etc,etc,.,.,all good comedy eh!!!