It is now becoming clear to me; perhaps the point of Kevin Rudd putting in a good word for Mary MacKillop is to provide needed evidence of another miracle performed in her name. For if the Prime Ministerial decision to lobby the Pope in the cause of the Blessed Mary’s sainthood does not put a dent in his popularity it surely will be a miracle. This might not be a major topic in the mainstream media, which prefers not to expose the  bigotry which lies just below the surface in Australia, but the rights and wrongs of  the Rudd intervention in what is surely a purely Catholic question is a major subject of conversation among the Australian people.

Online jobs fall but rates to plateau – The Australian

Bushfires heat on Brumby – the Brumby Government has been ordered by the Bushfires Royal Commission to explain a series of changes to its bushfire policy, after accusations that the changes could undermine the commission’s findings – Melbourne Age

Rees turns tables on O’Farrell over release of school results – the NSW Premier will reintroduce league tables legislation to Parliament to pressure the Opposition Leader, Barry O’Farrell, to back down from his controversial decision to block the publication of school results – Sydney Morning Herald

States divided on human rights charter – The Victorian Government is all in favour of a federal charter of human rights – as long as it doesn’t tread on the state’s toes. But the NSW Attorney-General says such a charter would be undemocratic and dangerous – Melbourne Age

Black and white and Rudd all over – Gerard Henderson in the Sydney Morning Herald says it seems Kevin Rudd does not like criticism and, consequently, does not see any reason to be gracious in victory. The Prime Minister dealt obsessively with News Limited’s handling of ute gate issue.

40,000 voices, but the one that really counts is staying quiet – Michelle Grattan in the Melbourne Age looks at the inquiry, chaired by Jesuit lawyer Frank Brennan, into whether Australia should have a human rights charter which has had to seek a month’s extension, until the end of September

Credit crunch eases but jobs crisis grows – Henry Thornton in The Australian would be surprised if the Reserve Bank cut rates today, though it may reiterate its continued readiness to do so.

The end is Bligh – Ross Fitzgerald in The Australian sees the Queensland Labor government fighting NSW to become the most unpopular government in Australia for the Labor party.

Time’s up for old industry – Erwin Jackson writes n the Melbourne Age that the stalled carbon pollution reduction scheme and renewable energy legislation is discouraging investment in Australian clean-energy and low-carbon growth industries, while in other parts of the world the low-carbon industry train is leaving the station with a clear destination in sight – new clean-energy jobs and industries.

China says 140 dead in Xinjiang unrest – Beijing was quick to blame exiled Muslim separatists for the violence which erupted on Sunday when Uighurs, Xinjiang’s largest ethnic group, rioted in the capital – Financial Times of London

Israel has right to hit Iran: Biden – Israeli officials officials have welcomed comments by US Vice-President Joe Biden that America would not stand in the way of an Israeli strike against Iranian nuclear plants – Melbourne Age

Indonesia shapes up as a reasonable democracy – Peter Hartcher in the Sydney Morning Herald looks at this week’s presidential election and finds despite all the fears about Indonesia post-Soeharto, it is turning out to be a democratic success story.

Capital raisings surge to $90b – The Australian Securities Exchange’s trading statistics for the 2008-09 financial year show shareholders ploughed almost $90 billion into share offerings – only $1.9 billion of that going into new company floats. The record amount raised on the ASX easily beat the previous yearly best of $77.9 billion, in 2007, a result fuelled then by the tail end of the markets boom and which included $20 billion from new floats – Sydney Morning Herald

Prius drivers put foot down over car’s performance – the car’s chief engineer, Akihiko Otsuka, admitted the company had opted for a bigger, more powerful engine because customers had demanded it. Mr Otsuka said the car, which remains the most fuel-efficient in Australia, could have been designed to use less fuel than the 3.9 litres per 100 kilometres it achieves – Sydney Morning Herald

Time to quit but watch for side effects – Statistics from Australia’s drug regulator, the Therapeutic Goods Administration, show six suicides and another 2500 adverse effects have been linked to anti-smoking drugs Champix and Zyban in recent years – Sydney Morning Herald 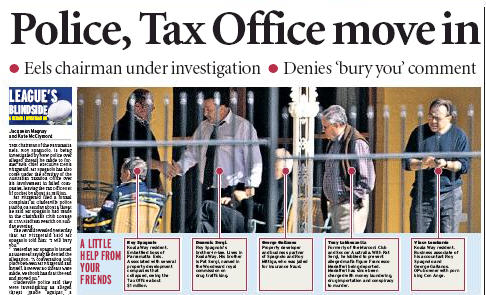 Police, Tax Office move in – The chairman of the Parramatta Eels, Roy Spagnolo, is being investigated by NSW police over alleged threats he made to former Eels chief executive Denis Fitzgerald. Mr Spagnolo has also come under the scrutiny of the Australian Taxation Office over his involvement in failed companies, leaving the Tax Office out of pocket by about $1 million – Sydney Morning Herald

Drunk Myles stripped of Origin berth – Roosters forward Nate Myles has become the first player banned from State of Origin for an off-field misdemeanor after being suspended for six matches over an alcohol-related incident that left fellow hotel guests disgusted and prompted the NRL to fine the club $50,000 following three similar issues in as many weeks – Sydney Morning Herald

Trying to govern without the numbers