Down south all the papers had the AFL clash between St Kilda and Geelong in common but generally it was a day where editors went their separate ways on the nation’s front pages.

Green MPs confess their love on party floor – Tasmanian Greens leader Nick McKim and new member Cassy O’Connor each stood and told a party room meeting they are in love with each other before publicly declaring their feelings in a statement. Mr McKim, 44, split with his long-time partner earlier this year while mother of four Ms O’Connor, 42, recently separated from her second husband – Hobart Mercury 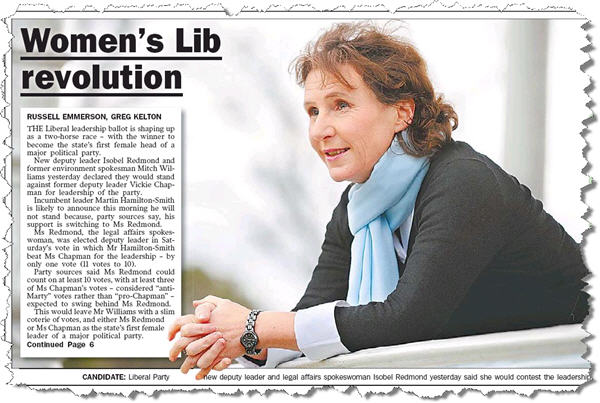 SA Liberal leader, Martin Hamilton-Smith to stand down – The Australian

Jostling begins as Libs pray for poll recovery – Opposition Leader, Malcolm Turnbull, is playing his cards close to his chest on a planned reshuffle of his front bench, prompting some of his colleagues to start jockeying for advancement and triggering another dose of leadership speculation – Sydney Morning Herald

Job slump hits migrants most – George Megalogenis finds Australian-born workers have been shielded from the worst of the global recession, as employers have mainly restricted the economy-wide job losses to migrant workers – The Australian

RBA expected to hold rates amid inflation fears – The Australian

Making a meal of half-a-million bucks – Victorian taxpayer has shelled out almost $480,000 for boozy lunches, coffee mornings and late-night entertainment at some of the city’s top gourmet restaurants for Brumby government ministers and their staff. Bills ranged from $110 for a flower arrangement to $30,000 banquets at top hotels – Melbourne Herald Sun

Anna Bligh rejects Peter Beattie’s criticism – Premier Anna Bligh has disputed Peter Beattie’s assertion that she should have declared a free holiday from a friend dealing with the Government. Ms Bligh said yesterday that Mr Beattie was “entitled to his opinion” – Brisbane Courier Mail

NSW in the grips of a blackout crisis – NSW is in a blackout crisis, with residents hit with almost 10,000 power outages a year. Residents of Sydney, the Illawarra, Central Coast and the Hunter were left without power for almost 1.4 million minutes in just 11 months from June last year to May – Sydney Daily Telegraph 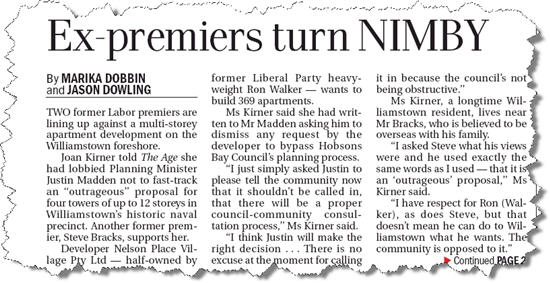 Former AHA liquor cop arrested after drunken outburst – A former top liquor cop who became a hotel industry spokesman was arrested and kicked out of a Sydney bar after drunkenly abusing police. Ex-inspector John Green, who was in charge of examining alcohol-related violence, swore at police as he and colleagues from the Australian Hotels Association drank after an official AHA function – Sydney Daily Telegraph

We’re missing out on the nuclear boom – writes Malcolm Farr in the Sydney Daily Telegraph – because a Labor Government, certainly a Rudd Labor government, won’t do the preparation that could take Australia into the era of cheap, clean power which is now common in big areas of the US and Europe.

It’s guaranteed this recession will be different – but how? Ross Gittins tries to work it out in the Sydney Morning Herald

Bernie Madoff Is No John Dillinger – Frank Rich in The Neew York Times argues that in the context of America’s own Great Recession, Bernie Madoff’s old-fashioned Ponzi scheme was merely a one-off next to the esoteric and (often legal) heists by banks and bankers. 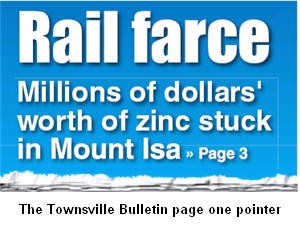 Major rail freight delays – a massive backlog has resulted in freight delays of up to four months for Queensland Rail customers such as Xstrata, leaving millions of dollars in freight going nowhere – Townsville Bulletin

Suncorp in a price vice for bank asset sell-off – Suncorp could be forced to mark down the price of its banking assets to find a buyer among its regional rivals, with concerns the competition regulator will not allow a top four bank to increase its market position – The Australian

Out the door, but why did Morris walk? – Sydney Morning Herald looks at the departure of a Westpac executive

Wind power has its own environmental problems – Miami Herald

Gyngell vows Nine will better Ten’s One – The Australian

All Saints not renewed by Seven – The Australian

The day crewmen of Front Puffin united to save ravaged souls – Paul Toohey writes of the harrowing accounts of scenes on the offshore oil facility Front Puffin after the navy sought help for the survivors of Suspected Illegal Entry Vessel 36, which exploded off Ashmore Reef on April 16 – The Australian

750,000 reasons for cash rate to stay steady – Centrebet asked for big bet on the Reserve Bank opting for no change – Melbourne Age

Reburial project in crisis – The ambitious project to exhume, identify and rebury 400 Australian and British World War I soldiers found in a mass grave in a French battlefield is in crisis after a Defence Department decision to use a cut-price contractor – Melbourne Age

The Best Kids’ Books Ever – Nicholas D. Kristof, writing in The New York Times, was aghast to learn that American children drop in I.Q. each summer vacation – because they aren’t in school or exercising their brains. A mountain of research points to a central lesson: Pry your kids away from the keyboard and the television this summer, and get them reading. To help, Mr Kristof gives his list of the Best Children’s Books – Ever! “Charlotte’s Web,” the story of the spider who saves her friend, the pig, is the kindest representation of an arthropod in literary history and ranks on top.