Are there no limits to the things our globe trotting Prime Minister thinks he can achieve? The journalistic chooks this morning are cackling away with the story fed to them by Kevin Rudd’s minders that he will be pressing Pope Benedict XVI in Rome on Thursday for Blessed Mary MacKillop’s sainthood. I just wonder whether the best Australian to be lobbying His Holiness on such an internal Church matter as sainthood is the once devout Catholic who now prays as an Anglican. Still, you have to hand it to those minders. They’ve been careful in their briefings to have a tasty morsel to appeal to those who worship at the altar of sport as well as God. Prime Minister Kevin will be taking the time on his overseas tour, between solving the present world fnancial crisis and the coming disaster of global warming, to lobby that other important man of the world, FIFA’s Sep Blatter, to secure for Australia the hosting of football’s World Cup.

THE BEST OF THE MORNING’S MEDIA

Libs ponder ‘Two Tonys’ option – Glenn Milne in the Sydney Sunday Telegraph writes of the Liberal Party considering a “Two Tonys ticket” – Tony Abbott with Tony Smith as deputy – if Malcolm Turnbull fails to recover from his savaging in the opinion polls.

Libs ponder ‘Two Tonys’ option – Glenn Milne in the Sydney Sunday Telegraph writes of the Liberal Party considering a “Two Tonys ticket” – Tony Abbott with Tony Smith as deputy – if Malcolm Turnbull fails to recover from his savaging in the opinion polls.

SA Liberals in limbo after ballot debacle – Adelaide Sunday Mail reports that the beleaguered Liberal Party faces more damaging infighting with yet another leadership ballot set for Wednesday at 10am. Opposition Leader Martin Hamilton-Smith’s bid to galvanise party support in the face of ongoing leadership speculation by holding a ballot yesterday backfired spectacularly, when he won by just one vote (11 to 10) against rival Vickie Chapman, with one still-unnamed MP abstaining.

Saint, soccer on PM agenda – Pressing for Blessed Mary MacKillop’s sainthood, and arm-twisting to secure Australia a soccer World Cup, will be on the Prime Minister’s agenda on an international trip starting tomorrow – Sydney Sun Herald 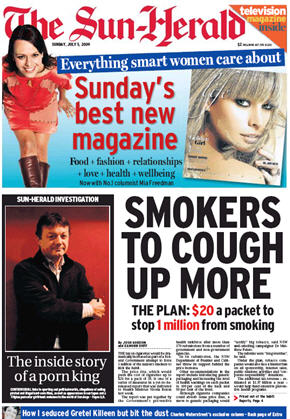 Smokers priced out of the habit – Cigarettes would cost more than $20 for a packet of 30 and come in plain wrapping under a radical proposal being considered by the Federal Government to fund a massive preventive health program – Sydney Sun Herald. A version appears also in the Melbourne Sunday Age.

What our MPs did on ‘study’ tour – Sydney Sunday Telegraph 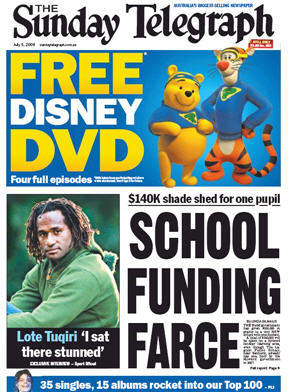 School funding farce – A school with just one pupil for 2010 has been given a $140,000 government grant to build a covered playground – even though it has already has a new one – Sydney Sunday Telegraph

Nice perks if you can get yourself elected – Our representatives are entitled to a huge range of benefits when they exit Parliament. It’s time to derail that gravy train, writes Kerry-Anne Walsh in the Sydney Sun Herald

Greens are on the lookout for a little Rudd love – Bob Brown believes his party is owed a little more respect from the PM, writes Michelle Grattan in the Sydney Sun Herald

Silly recommendations are very bad for our health – Chris Berg in the Melbourne Sunday Age writes that the Federal Government’s Preventative Health Taskforce seems to have adopted a tactic new to policy debate: if you propose enough bad ideas in a short enough space of time, it’s impossible to rebut them all.

China joins carbon tax protest – Beijing on Friday joined a growing clamour of complaint about US plans for a carbon tax on imports from countries without their own emission caps, warning it could set off a global trade war. Financial Times of London

Palin’s Latest Move Puzzles, and Perhaps Offends – Dan Balz in the Washington Post asks does Sarah Palin have a political future? Until she declares otherwise, the assumption will be that she remains interested at least in exploring a presidential campaign for 2012. But after announcing that she intends to resign as governor of Alaska, that future comes with bigger question marks than ever.

Bright idea puts paid to power bills – The Sydney Sun Herald meet a man who pays nothing for electricity to power his four-bedroom house.

Blokes just being blokes … until the media frenzy begins – Former premiership winning rugby league coach Phil Gould in the Sydney Sun Herald gives a personal, somewhat nostalgic, touch to the way the media, then and now, treats the behaviour of players

I’m sure I’m not the only person who has noticed what a poor media performer Mark Arbib is. Case in point: check out his woefully stumbling performance on Insiders this morning. He struggled all the way through and never got on top of what was thrown at him. See it here: