THE BEST OF THIS MORNING’S STORIES 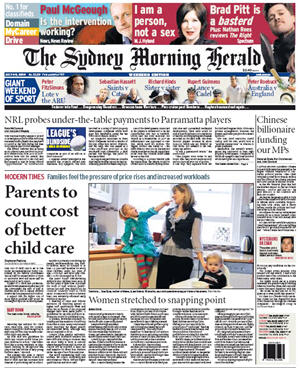 Chinese billionaire funding our MPs – Deborah Snow, Nic Christensen and John Garnaut write in the Sydney Morning Herald about a little-known Australian-Chinese property billionaire who has emerged as the largest offshore benefactor of Australia’s political parties. Chau Chak Wing has poured more than $2 million into the coffers of the Liberal, National and Labor parties in the past decade.

Behind the mysterious Dr Chau – He’s been an intimate of our political and corporate leadership for years. Now the public gets a look at Australia’s biggest overseas-based political donor. John Garnaut, Deborah Snow and Nic Christensen report in the Sydney Morning Herald

Economy beats the odds – A survey of business economists by Peter Martin of the Melbourne Age suggests Australia is on track to defy the world and avoid a recession in 2009, beginning a recovery early next year. 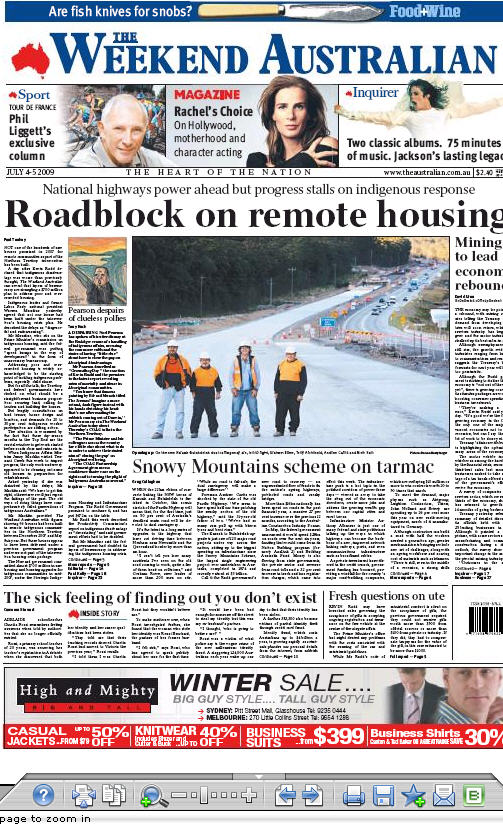 Ute was not a breach of gift rules, says Rudd – The Australian

Utegate timing off and muffler shot for Kevin Rudd – Steve Lewis in the Daily Telegraph tries to explain how he came to use that bogus email.

Leader likely to hold on in SA spill – The Australian

Turnbull may be beyond repair – The Australian

Guess who’s the king of comedy? – Laurie Oakes in the Melbourne Herald Sun gives the title to Kevin Rudd

Earning our keep – Shaun Carney in the Melbourne Age writes that the next challenge for the Federal Government, now that WorkChoices is officially dead, is to tackle Australia’s chronic skills shortage.

Indigenous policy on trial – writes Paul Kelly in The Australian

A solution that is clear, simple and right – Ross Gittins in the Sydney Morning Herald gives a lesson in economics 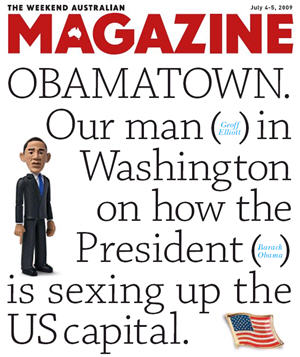 California sends out IOUs – Deep in debt and short on cash, California on Thursday churned out its first batch of IOUs in nearly two decades amid grumbles from bankers, growing public outrage and scant progress in negotiations to resolve the state’s widening budget deficit – Los Angeles Times

Evidence ‘not enough’ as terror suspect scores win – London Times reports a judge’s ruling that a suspect should be allowed to return to London as the Home Office had refused to provide enough information for him to instruct lawyers to challenge his exile to the Midlands.

Mr 10 per cent – The top dog in the taxi business is under fire, writes Elisabeth Sexton in the Sydney Morning Herald 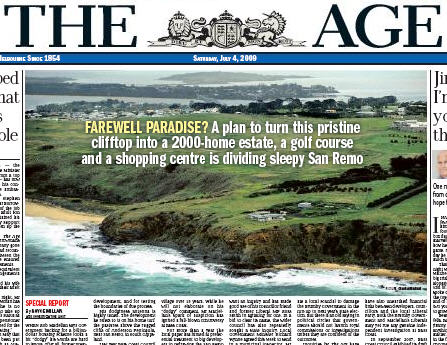 Paper plan threatens orang-utan survival – Sydney Morning Herald reports that endangered orang-utans being raised in Australian zoos for return to Indonesia are about to have their rainforests razed to supply the global market for toilet and photocopy paper. 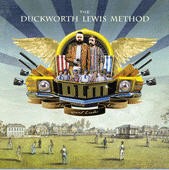 ‘The Duckworth Lewis Method’: will cricket songs be a big hit? Two Irishmen have written a pop album about the most English of games – London Daily Telegraph
Note: You can listen to some tracks at http://www.myspace.com/dlmethod

North Korea launches beer advert – North Korea’s latest launch is not missiles, but a TV advertising campaign for a locally-brewed beer. In a rare nod to commercial motives in the resolutely communist nation, the TV advert features a thirsty worker holding a mug of frothy beer.Are they filling the space left by the marketing change at VB’s hard earned thirst? – BBC News

Palin’s gone fishing. But she doesn’t want any dead ones.