Keating queries stance on China – Melbourne Age report of Paul Keating challenging a central tenet of Kevin Rudd’s multibillion-dollar, 20-year military blueprint, with a warning the Government has taken too defensive a stance in response to China’s rise in the Asia-Pacific region.

Trade deficit deepens to $556m – trade balance has remained in deficit for the second straight month as the nation’s exports continued to decline. Economists say the monthly deficits are likely to continue due to demand for imported goods rises as the local economy recovers toward the end of 2009 – Adelaide Advertiser

Federal MPs rival most unruly in Australian history – Michael Harvey of the Melbourne Herald Sun writes that only an early election can save our present crop of federal MPs from rivalling the most unruly since Federation. Halfway through this stormy parliamentary term, there have been 107 suspensions from the House of Representatives. That’s on track to challenge the previous Parliament’s record of 223. 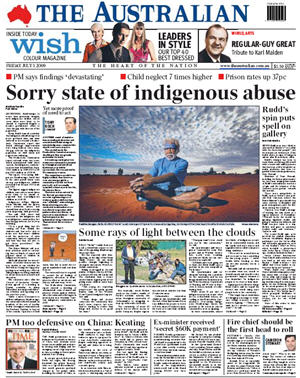 Keating queries stance on China – Melbourne Age report of Paul Keating challenging a central tenet of Kevin Rudd’s multibillion-dollar, 20-year military blueprint, with a warning the Government has taken too defensive a stance in response to China’s rise in the Asia-Pacific region.

Child care to get young school-ready – Yesterday’s meeting of state and federal governments agreed to a national childhood strategy, the first step towards a nationally consistent child-care system – Melbourne Age

The effects of climate talks in Italy will reverberate for Rudd – Michelle Grattan in the Melbourne Age looks at next week’s major economies forum on climate change being held in Italy.

Massive assault on Taliban – Brendan Nicholson, Foreign Affairs Correspondent, reports for the Melbourne Age from Kabul that Coalition troops in Afghanistan have been ordered to take extraordinary measures to avoid civilian casualties as they embark on a new air and ground offensive that will be a high-risk test of US President Barack Obama’s new war plan. 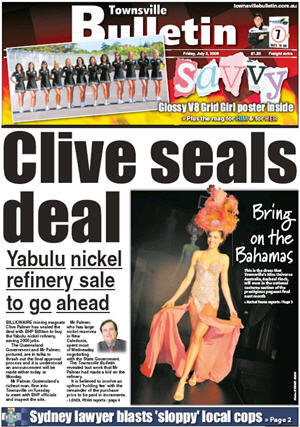 Yes, Minister, it all sounds very familiar – Lawrence Money and Suzanne Carbone in the Melbourne Age find a Federal Minister and Gunns using very similar words about a pulp mill

PM turns on News over OzCar affair – Kevin Rudd has called for a public debate on journalistic ethics, rounding on several News Limited publications over reporting of the OzCar affair – The Australian

Animal testing experiments kill one animal every hour – Sydney Daily Telegraph tells of 8813 animals – including birds, guinea pigs and endangered marsupials – killed in NSW during 12 months of trials. Another 16,000 were kept conscious and subjected to a “a moderate or large degree of pain/distress that is not effectively alleviated”.