A Fairfax attack on pollies and perks goes national 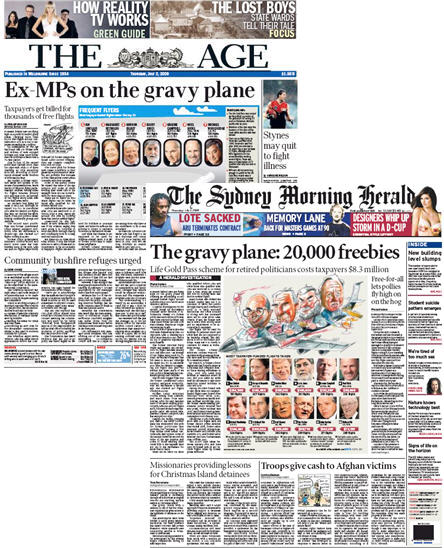 It’s an oldie but a goodie. The perks of politicians as they try and disguise the real earn from being an MP are resurrected regularly in slow news times. Electoral allowances, travel allowances, superannuation, overseas junkets – all keep coming under periodic scrutiny as the mob seems to like a bit of pollie bashing. And so it is that Phillip Hudson, Canberra chief of the new Fairfax National Bureau – formed by amalgamating most of the staff from what used to be separate Age and Sydney Morning Herald bureaux – has this morning up-dated the cuttings file with a look at the travel costs of retired Federl members.

The gravy plane: 20,000 freebies – says the Sydney Morning Herald of the former federal MPs flying high on the gravy plane by claiming an astonishing 20,000 taxpayer-funded flights around Australia since 2001 worth more than $8.3 million.

The gravy plane: 20,000 freebies – says the Sydney Morning Herald of the former federal MPs flying high on the gravy plane by claiming an astonishing 20,000 taxpayer-funded flights around Australia since 2001 worth more than $8.3 million.

Julia Gillard attacks class of clowns on school performance data – The Daily Telegraph reports how a band of Upper House “vandals” has hijacked plans to let parents see league tables showing how their childrens’ schools are performing. Education Minister Julia Gillard last night accused the NSW Opposition of “political opportunism” after it joined a bizarre alliance of independents to force through laws banning the comparative tables from appearing in print.

Former chief wants NT govt scrapped – The Territory’s first chief minister Paul Everingham – who fought for and won self-government 31 years ago – told the Northern Territory News he believed all the states and territories were a “waste of taxpayer money”.

Where the ruddy hell were you, Malcolm? – Annabel Crabb in the Sydney Morning Herald goes searching for the Opposition Leader

Lost lessons of the 100,000 ‘dead men’ – Jennifer Hewett in The Australian remembers the aftermath of the last big push by metal workers for industry-wide wage rises

Pay rise claim has echoes of disaster – David Uren in The Australian on how the claim by ACTU president Sharan Burrow that higher real wages will boost demand repeats an argument pressed by labour economists throughout the late 1970s until it was destroyed by the wages explosion of 1981 which ultimately cost 300,000 workers their jobs.

Religion offers MPs an easy way to justify their positions – Carmen Lawrence writes in the Sydney Morning Herald that perhaps it is partly out of a desire to avoid being labelled frauds when they stray from absolute fidelity that Australian politicians, unlike their American counterparts, have worn their religious beliefs lightly, eschewing ostentatious displays of faith or the use of religious precepts to justify or shape policy positions.

Economy hit in the eye – Alan Wood in The Australian says the data on housing prices, auction clearance rates and reports in this and other newspapers all point to a housing market that is beginning to run hot again, particularly, but not only, in the area where the Rudd government and state governments have been actively intervening: first-home buyers.

Cane toads face grim future – Volunteers are to be enlisted to help kill off the cane toad. But the carnage will not end at the toads. The Rudd Government will fork out millions to eradicate rodents on several Australian islands and feral animals across 178 million hectares – Brisbane Courier Mail

Lucky devils put on a brave face – the lucky ones, free from deadly facial tumours that have wiped out 70 per cent of the Tasmanian devil population in the wild – Sydney Morning Herald

Future of our newspapers is bright, says Hartigan – The Australian reports on the boss at the National Press Club

Blogging a dead horse for print – The Melbourne Age reports News Limited chief executive John Hartigan has launched a broadside attack on bloggers and other online amateurs, arguing they are no substitute for professional journalists.

Dead wrong: slaughter of the celebrities – It’s been a busy week for celebrity deaths, with Britney Spears, Ellen DeGeneres, Miley Cyrus and P Diddy all shuffling off the mortal coil – if you believe their Twitter pages – Melbourne Age 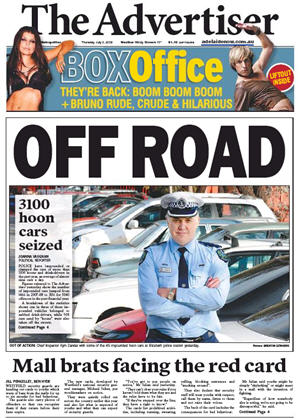 Paracetamol use causes a headache – Melbourne Age. The SMH version is here.

Punt Rd enfolds its favourite son – Patrick Smith writes in The Australian that unmistakably, the 18-month break since Kevin Sheedy left Essendon in 2007 has re-invigorated the veteran of 635 matches as coach

Brett Seymour sacked by Cronulla Sharks – Sydney Daily Telegraph reports on copious drinking, a smashed mirror, a sore fist and even sorer dignity. We take you inside the night that could end Cronulla star Brett Seymour’s career in the NRL.

Perhaps we need a rundown on why the travel was undertaken. Unless the flights were related to ongoing government service none should be approved.