House prices and confidence about the economy rise

The best of the morning's media 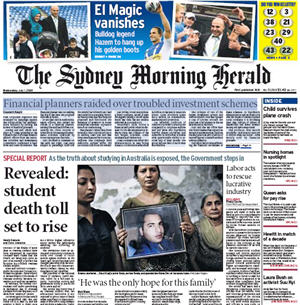 Revealed: student death toll set to rise – Details of the deaths of more than 50 overseas students have been suppressed by Australian coroners amid claims that the details are being kept quiet as part of an attempt to protect the lucrative $15.5 billion overseas student market – Sydney Morning Herald 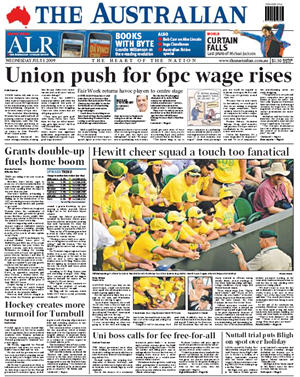 Union back in strife on sackings – The troubled Health Services Union has hit acrimony again, with police called yesterday amid claims the president of an influential branch of the union, Pauline Fegan, bullied and tried to evict a senior manager – Melbourne Age

Confidence in future bounces back – Dennis Shanahan in The Australian looks at a Newspoll finding that shows public confidence is beginning to return.

Grants double-up fuels regional home boom – The epicentre of the boom is regional Victoria, where the combination of federal and state government grants means first-time buyers outside Melbourne can pocket up to $36,500 to ease the path into home ownership. And it is happening amid a curiously buoyant national residential market, with new figures yesterday showing house prices increasing in the first five months of the year in all state capitals except Perth – The Australian

Law to ensure death penalty stays dead – Federal Government has written to the states telling them of its plans to introduce laws banning them from ever reintroducing the death penalty, whether they like it or not. Although all states have abolished the death penalty, under existing laws there is nothing preventing a future government from bringing it back – Sydney Morning Herald

Job for a boy

Labor’s underbelly – Rick Wallace writes in The Australian that ALP warlord George Seitz’s proposed memoir is sure to be an embarrassing book for the party’s Victorian branch.

You pay $30 million to go nowhere – NSW Government is ploughing on with another billion-dollar rail project it can’t afford. Yesterday it outlined an imaginary route for an $8 billion link to Sydney’s west – Sydney Daily Telegraph

Boneheads are back on the streets – Michael Stutchbury asks in The Australian if there could be be anything more bone-headed than the Australian Manufacturing Workers Union vowing to set the pace for a national wage round of more than 4 per cent just as business is trying to avoid a wave of job layoffs that would push the unemployment rate above 8 per cent?

NSW Liberals bottom of the class – Janet Albrechtsen writes in The Australian that last week, under leader Barry O’Farrell, the NSW parlizamentary party showed it has no commitment to core Liberal Party values.

NSW Labor stretches feasibility – says editorial in the Sydney Daily Telegraph. Given the Government’s new approach, we can expect a whole raft of thrilling new unaffordable dream projects to be announced in coming weeks.

Rudd puts a bomb under diplomacy – Daniel Flitton in the Melbourne Age argues we need to regularly articulate our approach to foreign affairs.

Pricing policy needs teeth if it’s to really benefit consumers – Nicole Rich and Sean Carroll in the Melbourne Age say supermarkets must not be allowed to hijack the unit pricing scheme.

UK economy shrinking at fastest rate in more than 50 years – The Guardian, UK

Readers pay a price for authors’ greed – Tim Wilson in The Australian writes that the campaign by wealthy Australian authors such as Tim Winton and Bryce Courtenay against reforms that would enable Australians to buy cheaper books is all about feathering their nests and has nothing to do with protecting Australian culture.

Laneway bar reaches a dead end – Sydney’s attempt at creating a laneway bar culture has been stalled, after one of the first new bars closed after two weeks and can reopen only if it uses main-road access – Sydney Morning Herald

Final humiliation for Elliott as Blues dump him – Melbourne Age

I’m not sure many people would agree with you.

One more for the list: Palin writes an email in God’s name. God is not amused.

Heathdon, because being born on a good rung of the caste system makes a person deserve preferential treatment from the police and media in a foreign country?

While I adjust my ‘victim’ hat, I’d add a couple of related questions to the issue of foreign students and the skilled visa program.

With my 15-years’ experience in the ICT industry, what do I need to do to gain a permanent full-time position?

My last contract ended in March 2008. I’ve been looking for a fulltime position since October 2008 and on the dole, sorry Newstart, since May 2009 (silly me, saved money and had to spend it to qualify – next time I’ll piss it all against the wall and play Lotto as I go).

Perhaps I should go to India and apply for a 457 visa?

Or, change my surname to something more employable? (Currently, it’s ‘Smith’).

In the same sarcastic vein

Being a smith your probably anglo and therefore born with all the money you need and the right skin colour, therefore the reason you cant find a job is your fault, that or you are a bogan(amazingly a term based on race and class that is acceptable) and it is your fault anyway.

As you may have read in crikey its harder to get a job with an ethnic name, oh yeah that was another racist beat up without evidence.

best of luck in your work search