Query over how long stimulus benefits will last

Bank for International Settlements warning over stimulus benefits – The Australian 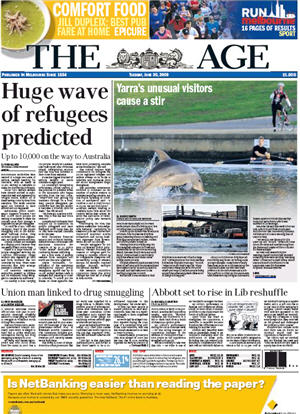 Bank for International Settlements warning over stimulus benefits – The Australian

Time for households to spend for Australia – tax cuts worth $3.4 billion which start tomorrow may not be enough to stop a stimulus hangover hitting the economy as the government bonus fades from view – Sydney Morning Herald

NSW MP meal allowance in NSW Remuneration Tribunal report – Dozens of NSW MPs including those based in Sydney, will be given a $77.55 a day meal allowance for simply turning up to work, under generous changes to politicians’ living allowances reports the Sydney Daily Telegraph.

Politicians feast as pensioners face famine – Sydney Daily Telegraph compares the new daily $77.50 in meal allowances of state politicians with the weekly food spend of a pensioner from Windsor

Libs question leader’s stance – Disquiet is spreading among senior Liberals, including federal frontbenchers, about the decision by the NSW Opposition Leader, Barry O’Farrell, to oppose the publication of school league tables and block the sale of NSW Lotteries – Sydney Morning Herald

New delays to Labor’s revamp of IR awards – Federl Labor’s revamp of the award system faces fresh delays after the Australian Industrial Relations Commission took the unusual step of calling on Julia Gillard to set out the hours of work, penalty rates and overtime that should apply in the restaurant sector.

We can trust chains with website: govt – Sydney Morning Herald on the possibility that the supermarket chains will run their own industry pricing web site.

Huge wave of refugees predicted – Indonesian authorities have warned of a huge new wave of asylum seekers heading for Australia, with as many as 10,000 waiting in Malaysia to make the journey via Indonesia – Melbourne Age

Our pork pie PM revels in butchering the truth – Piers Akerman in the Sydney Daily Telegraph reckons that while the Federal Police are investigating a fake email they should have a look as well at Kevin Rudd’s fake 2007 election policies.

New blood will revive Coalition – Success in politics, writes Gerard Henderson in the Sydney Morning Herald, turns more on political judgment than talent, and this is usually acquired over time. The problem of Malcolm Turnbull’s lack of experience can only be mitigated by time and by appointing the most politically skilled Liberal MPs to key positions. There is not an abundance of talent.

A chance to change lives – Tim Colebatch in the Melbourne Age argues ncreasing aid to poor nations ameliorates the misery of life in harsh economic times.

Don’t muzzle the dog – Michael Stutchbury in The Australian says Julia Gillard’s efforts to take some of the bite out of the Howard government’s building industry watchdog risks giving Western Australia’s Liberal government an excuse to pull the plug on the proposed national workplace safety scheme.

Renewed Appeal For Empathy – Iran Daily reports the Leader of the Islamic Republic Ayatollah Seyyed Ali Khamenei saying the country will overcome the crisis as stipulated by law and with the help of national unity.

State Government is the big winner from Lotto – Sydney Daily Telegraph predicts a windfall of more than $26 million to the Government’s coffers from tonight’s big lotto draw.

Century of tradition goes in appeal cases as judges to be named – More than a century of legal tradition in Victoria, which protected the identity of judges in appeal cases, has been overturned by the decision to identify them – Melbourne Herald Sun

Justice for all to see – Editorial in the Melbourne Herald Sun says the decision to identify judges, magistrates and VCAT members in appeal cases is a victory for transparent justice and common sense.

Frontline police to video drivers – The Adelaide Advertiser says police officers are starting to put video cameras in patrol cars to protect themselves against potentially false allegations from motorists they pull over.

Violence on the field

Get the gloves on, Barry Hall – Melbourne Herald Sun says Barry Hall’s career with the Swans was the subject of great mystery last night, with coach Paul Roos unable to confirm the 250-game full-forward would resume once his suspension for striking an Adelaide player had been served. Boxer Danny Green said  it was time his good mate Hall ended his career with Sydney and began his long-planned future in boxing.

Goings on off the field

Jake Friend and Sandor Earl charged over brawl – Sydney Daily Telegraph on PArramatta Eels players nterrogated at The Rocks police station in relation to a weekend brawl that left a female with facial bruising.

Roosters to stand by their men – Sydney Roosters are expected to stand by two players charged yesterday over a nightclub brawl in which the niece of ABC commentator David Morrow was punched, while Manly officials await a report into the involvement of star rookie Kieran Foran – Sydney Morning Herald

Roosters labelled a club out of control – The Australian

Sonny Bill Williams barred from Tank nightclub – With no suggestion he acted inappropriately, it seems runaway Bulldog Williams and his NRL posse may have fallen victim to a growing trend among clubs to bar football players says the Sydney Daily Telegraph