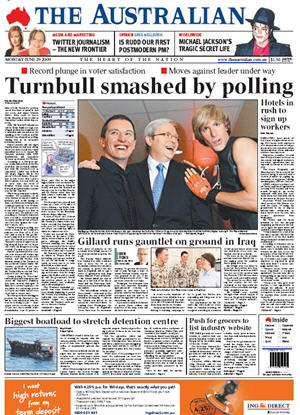 Leader ‘nuked’, but Libs are stuck with him – Michelle Grattan in the Melbourne Age 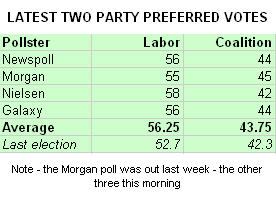 Polling smashes Turnbull – Dennis Shanahan writes in The Australian that Malcolm Turnbull’s political career has been smashed in just one week, and senior Liberals believe there could be moves within the party to remove him as Opposition Leader within days or weeks.

Support for Turnbull plunges – Michelle Grattan in the Melbourne Age gives the Nielsen numbers showing the Coalition and Malcolm Turnbull have received a devastating blow from the OzCar affair, with 53 per cent of voters saying they have a less favourable impression of the Opposition Leader as a result of it.

Turnbull hammered by voters – Phillip Coorey in the Sydney Morning Herald interprets the latest polls as meaning Malcolm Turnbull’s darkest hour as Opposition Leader is upon him with a new poll showing his standing has been dealt a hammer blow by the OzCar affair.

Utegate savages Malcolm Turnbull’s credibility, poll shows – Utegate affair has run over Malcolm Turnbull, with more than 50 per cent of voters accusing the Opposition Leader of being dishonest or deceitful in his handling of the forged email scandal. The latest Galaxy Poll, conducted for the Brisbane  Courier-Mail at the weekend, finds Mr Turnbull’s credibility is in tatters, writes Stefanie Balogh

Malcolm Turnbull loses credibility over Utegate affair – Malcolm Farr in the Sydney Daily Telegraph writes that Malcolm Turnbull’s credibility and his standing as the alternative prime minister have been smashed by the Utegate campaign he launched against Kevin Rudd, according to an exclusive Galaxy poll. 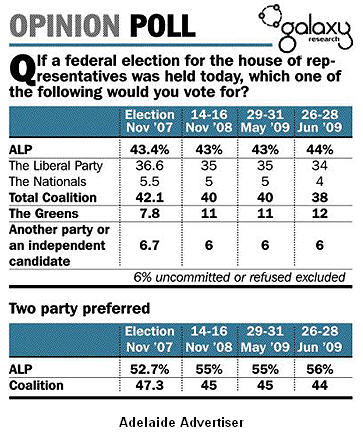 Liberals reel as party elders think the unthinkable – Dennis Shanahan in The Australian really puts the boot in: in a few short days, Malcolm Turnbull has gone from Liberal star and parliamentary prosecutor to a man living on borrowed political time.

Winners, losers both show ugly sides – Malcolm Turnbull needs to learn more about media management if he is going to succeed in politics, writes The Australian‘s Glenn Milne

Turnbull weaker than when he began – Peter Hartcher in the Sydney Morning Herald writes that if there were anyone else running for the Liberal leadership, Malcolm Turnbull today would be pronounced dead. Only the absence of any other candidate will keep him in the job.

Leader ‘nuked’, but Libs are stuck with him – concludes Michelle Grattan in the Melbourne Age 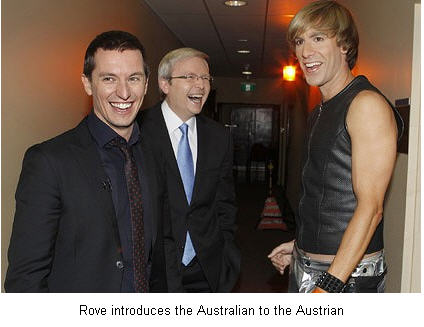 Date with Bruno sends PM into panic – Rudd may have been spared from sharing the Rove Live spotlight with Austrian fashionista Bruno last night, but he nonetheless claimed to be nervous just knowing the flamboyant icon was in the building – The Australian

Gillard runs gauntlet on ground in Iraq – The Australian

Ban on schools statistics in NSW slammed – The Greens and the Coalition joined forces in the upper house last week to ban the publication of “league tables”, backed by fines of up to $5000 for individuals and $55,000 for organisations, such as newspapers. The Australian has learned that, under existing NSW laws allowing private prosecutions, the proceeds of any fine imposed for compiling and publishing comparisons would be shared by the person or organisation that brought the court action.

Opinions about other things

Talking about my generation of leaders – Is Kevin Rudd our first postmodern Prime Minister, asks Greg Melleuish in The Australian

Peace is our best defence – Malcolm Fraser writing in the Melbourne Age argues Australia’s defence white paper promotes methods from the past when we should be working towards a nuclear-free future.

Invent, Invent, Invent – Thomas L. Friedman in the New York Times says the country that endows its people with more tools and basic research to create new goods and services is the one that will not just survive this crisis but thrive down the road.

Anglo may sell mine to thwart Xstrata takeover – The Australian

US vote a spur for push on ETS – The Australian

Fairfax in firing line for breach – Fairfax Middle East correspondent, Jason Koutsoukis, who breached a media embargo about Julia Gillard’s surprise visit to Iraq, has been accused by the government of placing the Deputy Prime Minister’s life at risk – The Australian 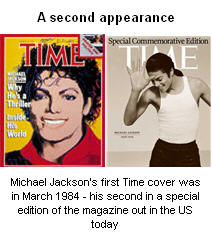 The Opposition dominates the news – do we actually have a Government?

Not mentioned here but Paul Sheehan has one of his characteristically myopic pieces in the SMH today. According to Sheehan Labor are a pack of animals for counter-attacking and returning fire against Turnbull.

Next he’ll be calling Labor a pack of Muslims with innate rapist tendencies. As QE2 might say: “Who is that silly man?”

My preliminary view before checking the press etc later today, based on the AFP having so far decided to NOT charge Godwin Grech (meaning he is not the forger, if indeed it is forged?), is:

The electorate are angry at being told their symbolic spouse, has breached faith, been unfaithful etc. The electorate “don’t believe it” as per Martin OShannasey of Newspoll on radio earlier today.

But that doesn’t mean the spouse is not having an affair. Affairs happen every day – just ask Mr Sanford.

The question is what the electorate will believe after the AFP fat lady sings, auditor general too.

And what are the stages of a ‘truth’ that dare not be spoken?

Bring on the AFP charges for who did in fact send the Treasury email. ALP hack or not ALP hack? I wonder.

Tom, ‘odd’ is the most polite word to describe your views. ‘Very bloody peculiar’ if we are being perfectly frank.

What do people think about K-Rudd’s performance on Rove?

He clearly bristled when the blow-dryer came up early. There was a beautiful comic moment that turned dark when Rudd laboured the point “It was a fabrication….I was in the middle Afghanistan, of course there was no hair-dryer” – and Peter Helliar from the back-seats piped up with “…and that’s why you were angry”. Rudd shot a look at the scruff on the couch and cattily said “you’ve never used a hair-dryer have you”.

Hang on – is our Prime-Minister having a go at someone for not using a hair-dryer? Was he channelling Bruno? The nasty nerd is undeniably vain as well.