Some harsh assessments of Malcolm Turnbull by the pundits 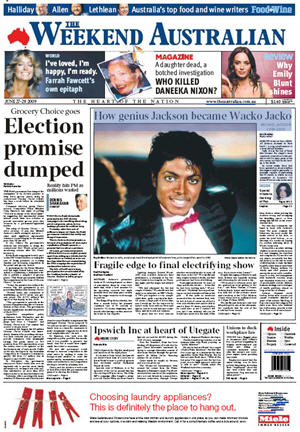 36% tumble in household wealth – New estimates from the Bureau of Statistics put combined household wealth at just short of $787 billion at the end of March, down from a peak of $1246 billion in September 2007 – Melbourne Age

Why bank rate cuts don’t meet Reserve – The notion that the rates the banks charge always change exactly in line with changes in the official rate is a relatively recent one. It applied only between 1999 and 2007. It wasn’t true before then and it hasn’t been true since then. Ross Gittins in the Sydney Morning Herald explains why.

Pressure to slash land tax – Melbourne Age reports Valuer-General Robert Marsh expects the median house price in metropolitan Melbourne to be down in the order of 10 to 15 per cent from the last valuation with all the indications pointing to the impact on commercial and industrial property having been greater than residential. 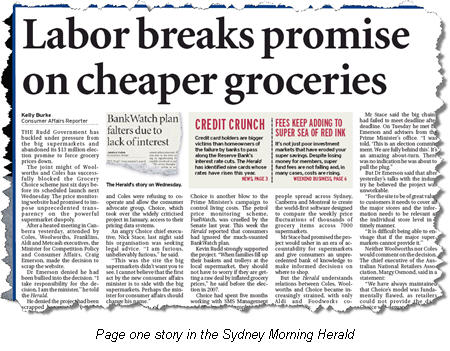 Labor breaks promise on cheaper groceries – The Rudd Government has buckled under pressure from the big supermarkets and abandoned its $13 million election promise to force grocery prices down. The joint might of Woolworths and Coles has successfully blocked the Grocery Choice scheme just six days before its scheduled launch next Wednesday – Sydney Morning Herald

Union plan for return to pattern bargaining – The Australian

Turnbull was as shocked as everybody else – The Sydney Morning Herald reports that Liberals are fretting over what Godwin Grech may tell the police after the Treasury official was coughed up as the Coalition’s Treasury mole.

The Rudd you never knew – Dennis Shanahan in The Australian looks at recent events and concludes that there now is a sense, as there wasn’t just two weeks ago, of an invincible government led by a ruthless politician.

The incredible shrinking leader – how the Opposition Leader blew it – It began with high hopes for Malcolm Turnbull, and ended in despair. David Marr and Phillip Coorey report in the Sydney Morning Herald

A Turnbull in a china shop – Annabel Crabb in the Sydney Morning Herald writes how it’s just not Malcolm Turnbull’s nature to be cautious. But his ability to inflict damage on the Government is horribly damaged by the week’s events, meaning that a long and difficult climb lies between Turnbull and the sunlit political uplands he appeared to be inhabiting only a week ago.

Error of his ways – Shaun Carney in the Melbourne Age writes how when Turnbull sets his mind on attaining a goal, he’s not used to letting anything stop him. But advancement through a political organisation draws on different skills than inter-party combat.

Brilliant and fearless but Paul Keating was right about Turnbull – He has no judgment.  Peter Hartcher in the Sydney Morning Herald agrees.

Turnbull a victim of ambition – Laurie Oakes in the Sydney Daily Telegraph argues that the more Turnbull and Senator Eric Abetz refuse to talk about their role leading up to the hearing, the more culpable they look in this whole extraordinary affair.

Dumb and dumber as delinquent laws waste lives of young offenders – Adele Horin in the Sydney Morning Herald says that if there is anything dumber and sadder than juvenile delinquents, it’s a government that abandons reason and evidence to pursue a law-and-order crackdown against the young.

Whetting the appetite with the absurd while farmers wonder where we’ll find our next meal – Tony Wright of the Melbourne Age goes to breakfast with some people from local governments to launch a campaign known as Water4Food.

Shopper website’s shelf life comes up – Jennifer Hewett in The Australian writes that Grocery Choice was always a silly stunt. It’s just taken a new minister for competition policy and consumer affairs to admit the obvious. Craig Emerson’s decision to kill off the program concedes the basic problem.

Age of uncertainty – The world may be stimulating itself out of one economic disaster and into another, writes Stuart Washington in the Sydney Morning Herald 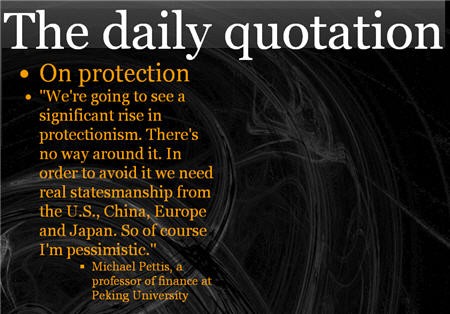 ‘I miss my mate Jacko’ – The Northern Territory News finds a local angle to the world’s biggest story as a Darwin pharmacist recalls living with Michael Jckson for six weeks when aged 11 and assures us Michael was not a child molester.

Uncertainty surrounds Jackson estate – a scramble to discover the true state of his troubled finances. It leaves even his partners in the catalogue of copyrights that were his biggest asset uncertain of who will inherit his interest – Financial Times of London

Surf up, sand down as tides wash Manly Beach away – Sydney Morning Herald

MasterChef bakes tasty treat for Ten – David Dale in the Sydney Morning Herald writes how cooking is the new renovation. It’s also the new black, the new rock’n’roll, the new watercooler buzzword, the new evidence that Australians are cocooning and the new knife to the guts of Channel Nine, which was hoping it had been punished enough for decades of treating its viewers with contempt.

Science steps up to the bar – to look at how no study has ever proved a causal relationship between moderate drinking and lower risk of death, only that the two often go together. It may be that moderate drinking is just something healthy people tend to do, not something that makes people healthy – Melbourne Age