Michael Jackson's death -- how the media reports of his death unfolded on Friday morning.

10 June: Reports that Michael Jackson’s 50-show comeback concert tour — to pay his debts — was under great strain due to ill health. Telegraph says:  “If you have shelled out for Michael Jackson’s comeback at the O2 next month, you have every right to be feeling a little bit nervous right now.”

25 June, 5:20pm (Los Angeles time): TMZ.com* reports Michael Jackson has died, having suffered a cardiac arrest and slipped into a coma before passing away. 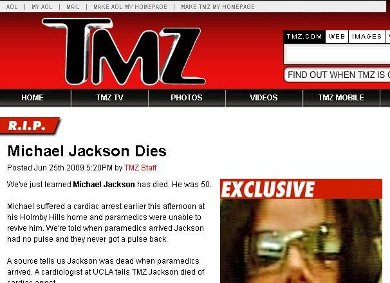 A bit later: While other media sources are still reporting he’s in a coma, LA Times says its sources  also confirm MJ is dead.

8:22am: Fake Stephen Conroy tweets: “I wonder what colour people will change their avatars to in support of Dead Michael Jackson?”

8:35am: On 4BC Radio (Brisbane), Michael Beatty, currently of the RSPCA and a former journalist, reflects on his interview with Michael Jackson in 1973 or 1974.

About the same time: The Insider publishes an “exclusive last photo” of Michael Jackson

8:36am: John August tweets: “I propose some national pop culture agreement that lets us appropriately acknowledge dead celebs without canonization.” This may be the sanest thing we hear for a while.

8: 49am: Triple J’s Gabby Brown reports MJ’s death — then segues to a spruik for the station’s Hottest 100 of All Time, saying perhaps MJ will appear on it. Brown encourages listeners to get their votes in for the competition.

About the same time: TechCrunch reports that the web, Twitter especially, has been struggling under the weight of the news.

8:54am: CNN plays Thriller video. That puts the time between his death confirmation and playing his film clip about the undead at about 20 minutes. 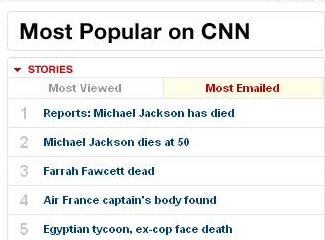 9:20am: Brad Richardson tweets “Richard Reid on Today claimed that MJ was like ‘Benjamin Button in reverse'”

9:27am: Today show has mash-up of Jackson’s life and music with Richard Wilkins voice-over. Crikey wondering how they edited it together so quickly when it finishes with this quote: “This man is a unique talent, we can’t wait to see what he comes up with next”. Oh dear.

9:40am: Today show still saying Jeff Goldblum is dead — having fallen off a cliff in New Zealand. Richard Wilkins calls it an “equal tragedy”. Story still not confirmed anywhere else reputable.

9:41am: Crikey notices Wonkette headline: IT’S 9/11 + HALLOWEEN × INFINITY. It has the tag: “he’s out of my life”. The blog also has “A Children’s Treasury of Presidents Posing With Michael Jackson”, noting that there’s one person who’s “very very happy” about the news — Republican Governor Mark Sanford whose affair, the biggest scandal of yesterday, will now get buried.

by 9:42am: Both 4BC and ABC612 in Brisbane have reported the death of Jeff Goldblum. Crikey not convinced.

About the same time: ABC chats to New Zealand police who confirm Goldblum … is not dead. Today show starts back pedalling on Goldblum death reports.

Shortly after 10am: “Michael Jackson died so that Turnbull might live” — headline on Christian Kerr article in The Oz.

10:10am: Actor Kevin Spacey tweets: “Jeff Goldblum is alive and well. I just spoke to his manager. Stop these stupid rumors.”

10:10am: Crikey work experience kid Cameron sent off to Sanity music store to see whether they’d already moved Michael Jackson merch to the front of the store. The results of his investigation here.

10:19am: Richard Wilkins reveals photo of him and MJ on Today

* The time frame of this developing story is eerily similar to reporting of Heath Ledger’s death.

10:36am: Melbourne readers say: trains still the most important story of the day. 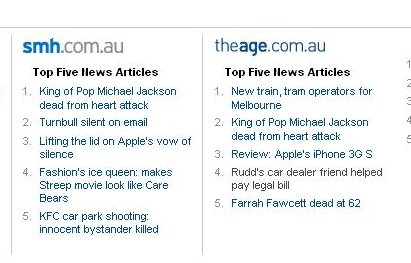 About now: The Australian reporting friend’s mother’s hairdresser’s dog upset by Jackson’s death. Or something like that.

Just after 10am: Illusionist and friend of MJ Uri Geller says that under hypnosis, Michael Jackson gave “validation” that he was innocent of child molestation charges — via SkyNews

10:33am: A Darwin man — now pharmacist — who met Michael Jackson as a child defends the singer against molestation charges, according to ABC News

10:58am: Barbara Walters appears on ABC (US) program spruiking tribute to Farrah and Michael (via SkyNews)

11:01am: “According to the LA Times, Michael Jackson has died. Well, what choice did he have?” Crikey’s music blogger Tim Dunlop on future Jackson — “middle-aged crooner with a regular gig in Vegas” — we will now never get to see.

11:05am: New Weekly Twitter tells off The Chaser and The Onion for mocking Michael Jackson: “TOO SOON … guys”.

11:09am: Meghan McCain tweets: “My mom said this is like when Elvis died, crazy to have this happen. It’s still so surreal and tragic…”

11:33am: The Sun posts a pic of the paramedic monitor showing Jackson’s 911 distress call.

11:40am: Was Michael Jackson suffering from Lupus? — Fox News

11:40am: Rumour hits Crikey office that Herald Sun is planning a special 1pm edition to mark MJ’s passing. Confirmed by this pic on their home page. 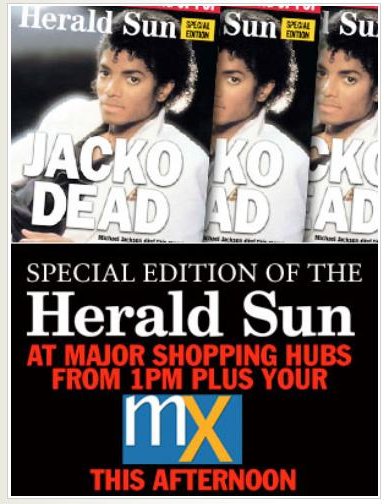 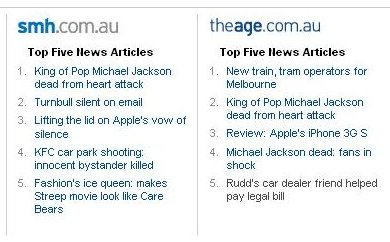 12:42pm: John Michael Hausen finally shows up in obligatory interview for SkyNews — we should remember the music, not his strange lifestyle, “Neverland and the monkeys and whatever”.

Reporting Michael Jackson? It’s a war zone out there

I just did a search via Google Images and could not find any photographic evidence of Michael Jackson and Farrah Fawcett ever appearing in public together.

Expect to see all of Michael’s albums and DVDs in prominent sale positions this morning in Sanity music stores. About an hour after Heath Ledger died we were given directions to move all copies of his DVDs to the front counter so all customers could see them – this was an email directive send to every store. I’m thinking that the news about MJ (even if it is not true) will cause even faster reactions in retail stores everywhere. Nothing like a famous person dying to get people to spend their money..

g’day, i must correct a glaring error in your timeline:

8:50am: ABC 774 is chatting about the Connex contract. Haven’t they heard Michael Jackson’s died?

unfortunately you must have tuned in late and missed raf epstein’s obligatory chat with the still half asleep, doyen of oz rock celebrity; molly meldrum

the best 2 minutes of current affairs journalism this year!

The first keyboard cat was actually much earlier:
http://www.youtube.com/watch?v=wuVdR7mKWYI

Steven, thanks for the heads-up. Evidently tuned in too late. Have corrected timeline accordingly.