As Malcolm Turnbull’s OzCar gotcha reverses on him and the rozzers begin the task of investigating links between Treasury and the Liberal Party, the party itself is disintegrating beneath him.

With four reps crossing the floor on alcopops (alcopops!) and three reps crossing the floor on the more important and principled matter of accommodation charges for mandatory detainees (accommodation charges for mandatory detainees!) Turnbull is running the least disciplined major Australian party of modern times.

Of course, elsewhere, these floor-crossings would be of no import. Alone among the major English-speaking democracies, Australian party discipline is monolithic — the party either marches together, or there’s a conscience vote, with nothing in between.

In the US, of course, the party doesn’t exist in that sense. You want to tax alcopops, then you build a coalition between pro-regulation Democrats, ultra-conservative Republicans and people of either party from the brewing and distilling states (Oregon, Kentucky etc) who would want to see their products become favourably priced by comparison.

The advantages of the latter system for party leaders are obvious — they can let the valve out on stuff they know they will win comfortably and not turn each vote into a test of whether the leader has control of the party. It’s an acknowledgement that parties are coalitions of parties. So what if Wilson Tuckey opposes an alcopops tax? He knows that you need a sweet drink to mask the taste of the roofie, and without roofies most of his male constituents would never get laid. The man’s fighting for his people.

But since the end of World War Two, the idea of “controlling your party” has become a fetish in Australian politics, with no real differentiation between a stray alcopops vote and a split over going to war.

Which is bad news for Turnbull, because he has come on the scene just as the internal coalition that constitutes the Liberal Party is pulling apart.

The social conservative/economic liberal mix that was at the root of the Howard formula was born with a use-by date on it. Until the late 1960s, no “mix” was needed — both parties were socially conservative. One of Paul Keating’s early speeches was about the heinous way in which equal pay for women would destroy the family. Gay rights could be summed up Johnno Johnston’s remark that you don’t put the petrol where the oil goes in. Etc.

The rise of the boomer generation, the spread of media and expanded education made left-liberal progressivism the dominant social philosophy for a generation — dominant of the political class in anyway, less solidly so in whole areas of social life.

The thing about left-liberal progressive social policies is that they fit both economic liberalism (as freedom for the individual in all spheres) and social democracy (as the spread of equality, both economic and social).

But for Labor, rank-and-file support for — or at least benign indifference to — social progressivism was contingent on continued support for social democracy. When inequality began to rise under the Hawke government, and when Keating combined market-oriented policies with an elitist vision of History and Culture (represented as the “real” essence of the Australian people), Labor had achieved that miraculous thing — the exact opposite of the correct formula.

For John Howard and a few shadowy consiglieres like Peter Coleman and Tony Abbott, this classic mistake created a gap whereby a new version of the social-economic mix could be sold to people. Howard’s argument — a mangled and essentially reversed version of social theorists such as Christopher Lasch — economic liberalism demanded state-enforced social conservatism. Howard was smart enough to realise — as he noted in one or two vaguely theoretical writings — that globalisation, neoliberalism etc pulls communities and life-worlds apart, renders people alienated and dispirited, ungrounds life.

Social conservatism — the imposition of limits — was thus the necessary corollary to economic liberalism. For Lasch and others, the coercive state powers coming out of the “culture wars” were a standing condemnation of the neoliberal world — it was so undermining of everyday life that it had people begging the state to put limits on them. For Howard et al this was a positive social policy, a formula.

Everyone adopted this. In the UK Major, Blair and Brown piled on the CCTVs, anti-social behaviour orders, pre-criminal targeting, binge drinking etc etc. In the US, 911 gave the opportunity for an end-run around the Constitution and eschewed the coercive public health campaigns for the simple expedient of jailing everyone. In Australia, it was more symbolic than real, but provided scope for an endless war against shadowy “multiculturalism”, “postmodernist English teachers”, “relativist history” etc etc. In France, which came late to this, Sarkozy is doing it with an attack on the burqa — a substitute for his failure to reform France’s sclerotic economy, because he’s too scared to take on the unions.

The trouble for the Liberals is that this was always a finely calibrated philosophy and it was to a near-total degree personified and projected by John Howard, a Liberal who looked and spoke more like a suburban ALP member than the shoddy crowd of silvertails, sinisters and third-rate real estate agents who constitute the party as it stands.

Abbott, for example, is more libertarian on some matters — such as the alcopops thing — and still more conservative on others, such as abortion, far beyond the middle-range set by Howard. Costello was republican and reconciliationist, Georgiou and others maintain the vestigial social liberalism of the party, and Turnbull is an easy pigeon for Labor to knock off, a Sydney lawyer with dirty Henson pix on his walls and a bunch of bohemian mates. Rural Liberals and the Nationals have become, via climate change, a rump of irrationalist reactionaries.

The party is going in half a dozen different directions, and no-one in the leadership is willing to do even the minimal intellectual work that Howard did in the early 90s and work out what the philosophical basis for the party might be. The only one who might, Abbott — a turkey lovingly stuffed and basted by Christopher Pearson and George Pell for many a year — still has not abandoned his hope that Australians might, deep down, be a conservative people after all.

Abbott’s delusion is as misguided as Keating’s hope that Australians could suddenly be persuaded to become a people who lived and felt their epic History, rather than renting a Lethal Weapon DVD on Anzac Day. No-one else in the party has a clue. None of them can be bothered to sit down and write an essay about what they think.

Turnbull has powerful advocacy skills — coming to the fore in rather desperate circumstances — but something more is needed at the moment. Otherwise, barring a big windfall one of which they’ve already punted out of touch, they will languish for a decade like the UK Tories, before changing their form substantially anyway. 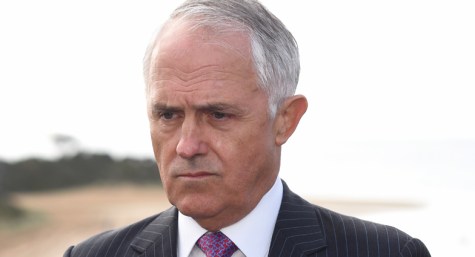 Crikey Classic: the double-whammy of the Liberal Party’s inevitable decay

The Liberal party is trapped in a death spiral

wow, Rundle – you know you’re going to get spanked for the rophie/Tuckey linkage, but it did make me spray my coke zero all over the work desk. Lovely work…

Yes, that probably makes it as Crikey’s Line Of The Week.

I bet the French can’t wait to have economic power taken from the unions and given to business. Perhaps they could dismantle the health system and increase the retirement age. Take money out of public transport and education. Privatise everything. Stop buying French goods so local manufacturing dies. Actually, I don’t know much about the French economy but I am sure they can’t wait to become just like America.