New emails show other car dealers helped too – Sydney Morning Herald reports on the release by Treasurer Wayne Swan of a fresh batch of emails last night that showed other car dealers seeking finance were given a similar level of attention as John Grant, the Ipswich dealer who gave Kevin Rudd a free ute. 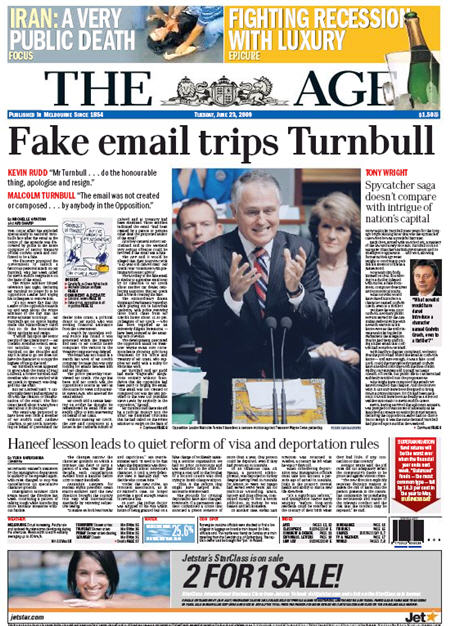 Police investigate mild-mannered bureaucrat – Godwin Grech, writes Michelle Grattan in the Melbourne Age,  must be the least likely character to be at the centre of this extraordinary affair. On all accounts the 42-year-old public servant who has worked in the Prime Minister’s Department, as well as Treasury, is diligent, loyal, punctilious about his work.

Unsettled outlook, and some running for cover – in politics, half the battle turns on winning the contest to define the battleground. By the day’s close, the ground had shifted decisively in the Government’s favour – Melbourne Age 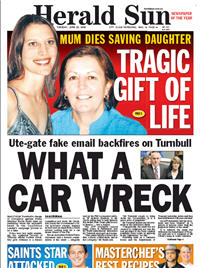 New Swan messages ‘special treatment’ – Last night, the Treasurer’s office released a swag of emails concerning the cases of two other dealers, which Swan said proved those dealers had received “as much, if not more attention from the Treasury” than Grant did – The Australian 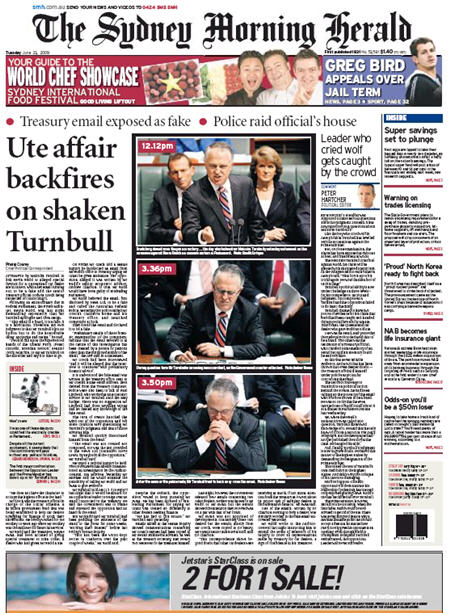 Leader who cried wolf gets caught by the crowd – says Peter Hartcher in the Sydney Morning Herald.

Close the gate on the beaut ute – Gerard Henderson in the Sydney Morning Herald believes that despite all the current excitement, it seems likely that this controversy will pass without any political fatalities.

Fake or not, perception is all in politics – Joo-cheong Tham in the Melbourne Age questions why were the Treasurer and his staff so intimately involved in this application by Brisbane’s John Grant motors.

Tackling the tax system – Tim Colebatch in the Melbourne Age sees utegate showing one of the sad truths about Australia: the smaller the scandal, the bigger the coverage it gets. He argues that if we want to focus on improprieties, let’s focus on something big, not a car dealer who ended up with nothing.

Coalition deals itself mortal wound – concludes Dennis Shanahan in The Australian. The Prime Minister is now in the clear, the Treasurer will survive and the Leader of the Opposition’s character and political judgment are being seriously questioned. The Coalition has snatched defeat from the jaws of victory – an overreaching has led to a disastrous shortfall.

Australian politics a game of cheap point scoring – Paul Syvret writes in the Brisbane Courier Mail that Kevin Rudd has friends. Hold the front page. Surely this is the single greatest revelation to emerge so far from the so-called utegate affair.

Forged email unravels the Opposition’s case – The episode lends weight to the view that the Opposition Leader is impatient, impetuous and prone to lapses of judgment – Melbourne Age

Turnbull stunned by runaway ute – though Mr Turnbull emerges diminished from this affair, the Government does not get off scot-free either – Sydney Morning Herald

Business assistance must be hands off – The fake email has tarnished the opposition’s case. Labor’s interventionist approach will leave it open, as opposition Treasury spokesman Joe Hockey said last week, to claims of being “under enormous pressure to do specific deals for favoured friends” – The Australian

In the middle of maelstrom – Turnbull needs to review his methods of establishing whether evidence before him is accurate. But that does not let the Government off the hook when it comes to other evidence, which is known to be genuine – Sydney Daily Telegraph

Cabinet warned on licence removals – pre-purchase property inspectors, kit-home suppliers, lift mechanics and floor finishers and coverers will no longer be required to be licensed in NSW under legislation being debated. Sydney Morning Herald.

MP’s departure for Canberra a catalyst for Greens purge – the departure of the Greens MLC Lee Rhiannon to Canberra may coincide with the departure of as many as three of the party’s four MLCs at the end of their terms – Sydney Morning Herald.

Call for changes to allow children in the Senate chamber – Sydney Morning Herald.

Terrorism watchdog too little: Greens – On Thursday the Government plans to introduce legislation for an independent reviewer of terrorism laws, to be known as a national security legislation monitor. The Greens say the Rudd Government’s plan for a watchdog does not go far enough and they want Parliament to immediately remove controversial provisions – Sydney Morning Herald

We’re a team, but who will be leader – A meeting of Opposition front-bench members has failed to resolve the party’s festering leadership issue – Adelaide Advertiser

Rolling out the infrastructure barrel – Malcolm Colless in The Australian writes that the political spin around big ticket infrastructure projects is now the cornerstone of a reborn Labor Inc.

Heritage changes give owners more power – Councils in NSW will have to “thoroughly consider” the views of owners before a property is heritage listed under amendments to the Heritage Act – Sydney Morning Herald.

Garrett to approve big polluters – a greenhouse trigger would be proposed by a panel of five independent experts in a discussion paper next week as part of an official review of Australia’s national environmental laws says the Sydney Morning Herald. The proposal would automatically refer large projects which emit high amounts of carbon for an environmental assessment by the office of the Environment Minister, Peter Garrett.

US critical of whaling plan – Australia’s attempt to end Japanese scientific whaling has come under attack, with criticism even coming from its ally, the United States – Melbourne Age

An honest to goodness political crisis