There’s plenty of detail about the ute-gate crisis in a special Saturday media wrap. And if you are after some more leisurely reading this weekend there is a Breakfast Media Wrap of stories from magazines around the world. 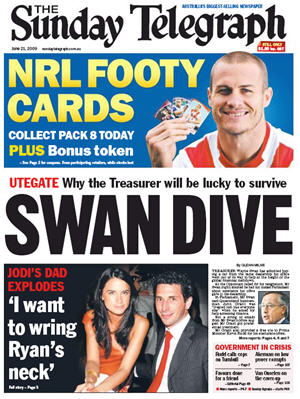 Swan’s defence beggars belief – Glenn Milne argues in the Sydney Sunday Telegraph that weight of evidence that has emerged to date in the “Utegate” crisis that has consumed the Rudd government can lead to only one conclusion: Treasurer Wayne Swan has either misled the Parliament or come very close to it. 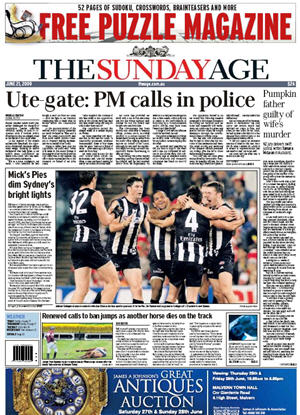 Ute-gate: PM calls in police – Michelle Grattan reports in the Melbourne Sunday Age that Prime Minister Kevin Rudd yesterday questioned the integrity of Opposition Leader Malcolm Turnbull, calling on him to co-operate with a Federal Police investigation into an alleged email at the centre of the OzCar affair.

Labor truly stumped on OzCar email – If the Government is hiding a dark secret in the OzCar case, it is putting on a very good act. It appears genuinely perplexed about the alleged email, which it declares a fake, from the Rudd staff member to Treasury on behalf of car dealer John Grant – Michelle Grattan comments in the Melbourne Sunday Age.

OPI corruption documents given to police – Melbourne Sunday Age reports that the state Opposition has questioned why Victoria Police was given access to transcripts of secret corruption hearings two weeks before public hearings in 2007 into former assistant commissioner Noel Ashby and police union boss Paul Mullett. 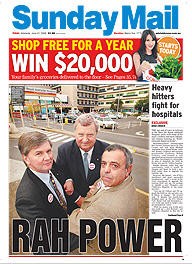 Jobs for a boy

Labor offers Costello job – Melbourne Sunday Age says Peter Costello will be offered a Federal Government job – a board member on the nation’s $60billion future fund he set up during his 11 years as treasurer.

Bombers may have a role for retiring Peter Costello – Essendon will speak to Peter Costello about a possible role with the club, but doubts the former treasurer would be interested in joining the board. – Adelaide Sunday Mail.

First political rule is don’t lie – The Sydney Snday Telegraph editorial declares that Rudd may well survive the most serious crisis to hit his government, but Wayne Swan looks to be on shaky ground. Evidence in a string of emails between Mr Swan, his staff and Treasury officials, and Senate Economics Committee testimony from many involved, point to a special deal for Mr Rudd’s car-dealer friend and supporter John Grant.

Openness is the first casualty – of ute-gate according to Piers Akerman in the Sydney Sunday Telegraph. Kevin Rudd has shredded any claim of running an open and transparent government with Labor’s handling of the Senate probe into his favoured car dealer scandal.

Why Swan’s explanation adds fuel to Utegate fire – Peter van Onselen reckons the OzCar Affair raises three important questions: should Prime Minister Kevin Rudd resign? And what about Treasurer Wayne Swan? Should he go too? Should we really be surprised friends of political leaders get better treatment than the rest of us? The answers, he arguers in the Brisbane Sunday Mail, are No, Yes and No.

Baby bouncers have much to learn about equality – Anne Summers in the Melbourne Sunday Age recalls that whenNancy Pelosi was sworn in as Speaker of the US House of Representatives before a packed chamber that included more than 100 children, she invited some of these children to join her at the podium. As the votes for her were tabulated, she held an infant in her arms and was surrounded by children.

Crusader Erin Brockovich saw ‘genuine fear’ in Yarloop – The Perth Sunday Times talks with US health crusader Erin Brockovich who has championed a legal action in the US against global mining giant Alcoa on behalf of residents and former residents of the Yarloop area who allege that emissions from a neighbouring alumina refinery have made them sick.

Our climate hots up but the debate is divided and small-minded – Tim Flannery gives his view to the Sydney Sun Herald.

Why Kerri-Anne refuses to play – the latest soap opera being played out at the Nine Network as reported in the Sydney Sunday Telegraph.

‘Cigarettes, whisky, and wild, wild women’ – Henry Allingham, at 113 now the world’s oldest man, on the secret of a long life – The Independent, UK

John Quigley calls for Mallard-like compensation – Perth Sunday Times says the WA Opposition has called for the family of an Aboriginal elder, who died in a searing prison van, to be given a payout of millions of dollars.