Car dealers run out of stock

The pick of the morning mediza

Stories about “ute-gate” are this morning on their very own site.

Car dealers run out of stock as gloom lifts – the Sydney Morning Herald reports the car industry ss facing a problem few would have dreamed of – some dealers have run out of cars.

Farewell, Peter, you will be missed – Annabel Crabb in the Sydney Morning Herald farewells a great parliamentary entertainer and notes in passing a Prime Ministerial mistake with a tumbler of water

Let reality do the talking – George Megalogenis writes in The Australian that almost half the electorate (46 per cent) remains sceptical of the Labor government’s economic stimulus even though the data says it is helping to ward off the global recession locally.

California’s Credit Rating May Be Cut by Moody’s – Bloomberg

Smoking to be banned in cars with kids – The Australian 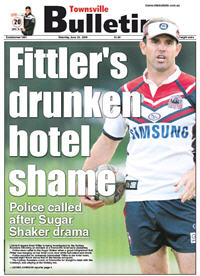 Sex, drugs and droppin’ ball: ex-wife tells all – Shireen Lolesi’s book gives a rare insight into the personal politics of footballers and their partners, writes Jessica Halloran in the Sydney Morning Herald

Professionals get tattoos more than ever – Sydney Daily Telegraph