An honest to goodness political crisis

It is political rule number one for Prime Ministers that they should never have an inquiry into anything without knowing what the answer will be in advance. Presumably that means that Kevin Rudd does not believe the Auditor General, who has agreed to look into this ute-gate business, will find evidence that a so-called email from a member of his staff to a Treasury official is genuine.

PM orders probe into Ute-gate storm – The Melbourne Herald Sun version of the Steve Lewis story – the Government was forced to call in investigators amid allegations that the PM’s office sought favours for a close friend of Kevin Rudd. 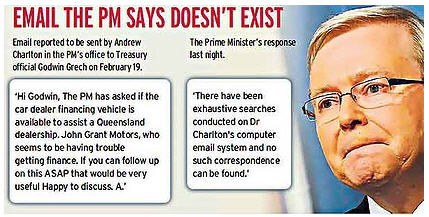 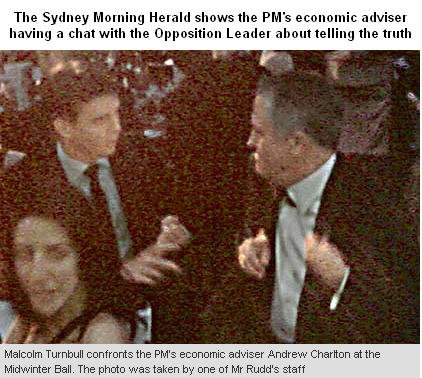 Treasury faces grilling over PM’s mate – Mark Davis writes in the Sydney Morning Herald how the sight of public servants facing the choice between telling the truth or obfuscating to shield their political masters is a compelling spectacle. At yesterday’s Senate hearings one Treasury officer chose obfuscation and the other chose candour, although it was evident this would not be career-enhancing. 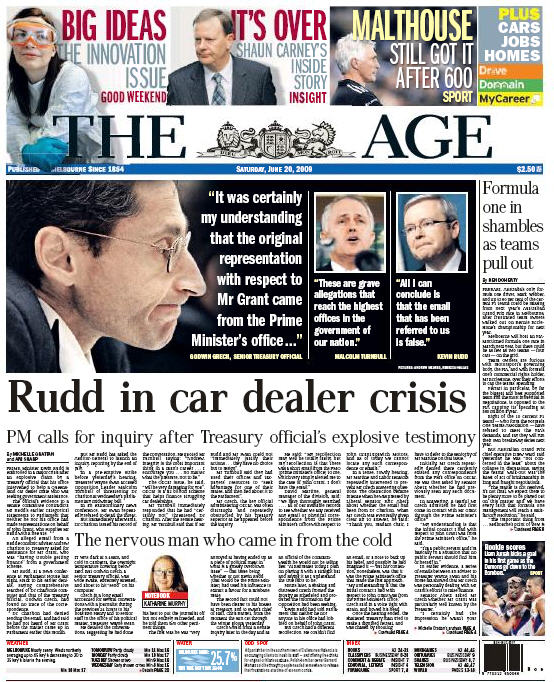 Rudd in car dealer crisis – Prime Minister Kevin Rudd is embroiled in a major crisis after an explosive claim by a Treasury official that his office intervened to help a Queensland car dealer mate who was seeking government assistance. The official’s evidence to a Senate committee contradicts Mr Rudd’s earlier categorical statements to Parliament that neither he nor his office had made representations on behalf of John Grant, who supplies Mr Rudd with a free ute – Melbourne Age

Nervous man who came in from cold – Katharine Murphy in the Sydney Morning Herald on the public servant who was “very annoyed at having ended up as a piece of political meat in what is a grossly overblown issue” – that issue being whether or not Kevin Rudd (that would be the Prime Minister) had used his influence to extract a favour for a Brisbane mate. 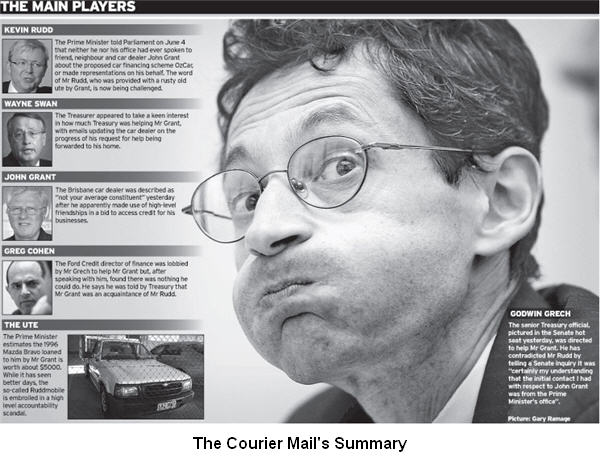 Kevin Rudd calls ute affair probe as he denies his office lobbied to help donor – Kevin Rudd has directed the Auditor-General to investigate allegations that his office lobbied for a car-dealer friend, following damning evidence given to a Senate committee yesterday by a Treasury official that implied the Prime Minister might have misled parliament – The Australian

Email a fake, says an angry Rudd – The Australian

Treasury official shielded in Senate – Labor senators and a senior public servant repeatedly tried to deflect questions from the distressed Treasury official at the centre of yesterday’s car financing controversy, earning censure from the opposition – The Australian

Canberra chat no longer safe: John Grant – The Australian chats with the Ipswich car dealer friend of the PM who says he neither asked for nor got any special favours

Seemingly innocuous email threatens to derail Kevin Rudd – Steve Lewis in the Melbourne Herald Sun writes that while the PM and Treasurer Wayne Swan can duck for cover over their involvement in “Ute-gate”, they are under heavy pressure to explain their alleged involvement in helping a Brisbane mate, car dealer John Grant. The evidence is piling up that Mr Grant received special treatment when his automotive business ran into trouble late last year. Yet both Mr Rudd and the Treasurer have denied their involvement – or even that they intervened — to help a fellow Queenslander. Gentlemen, writes Lewis, the facts raise very serious questions.

Game of brinkmanship – Paul Kelly in The Australian believes disclosures from Treasury that seem to contradict statements to parliament made by Rudd and Wayne Swan, give Malcolm Turnbull an integrity argument against the government. This will infuriate Rudd, who is certain to give no quarter.

It took just hours to trip into the firing line – Phillip Coorey in the Sydney Morning Herald on how the story moved from being about Malcolm Turnbull bullying Kevin Rudd’s economic adviser Andrew Charlton at Wednesday’s Midwinter Ball to the Government’s two highest officers – the Prime Minister and the Treasurer – having sticky questions to answer. It also demonstrated why a prime minister must be squeaky clean, whiter than white. The moment Kevin Rudd accepted that free ute from car dealer and mate John Grant was the moment he exposed himself to allegations of favours.

In full flight, the friendliest advice can get scary – Annabel Crabb in the Sydney Morning Herald recalls the night Wayne Swan was the one making the threats against an opponent and has some advice for Malcolm Turnbull about acting in a similar fashion.

Looking for truth in a uteful of lies – The verdict according to Michelle Grattan in the Melbourne Age: Kevin Rudd’s future hinges on whether an email allegedly from his economic adviser to Treasury asking it to help the PM’s car dealer friend is a fake or genuine. Rudd last night staked his credibility on the document not being genuine.

PM’s car trouble more than just a minor bingle – David Penberthy at The Punch website reckons the affair is reminiscent of the Sunrise Dawn Service fiasco where Mr Rudd emphatically denied that his office had been involved in any attempts to reschedule the Anzac Day Dawn Service, only for emails to emerge proving he had done just that.

Rudd to be driven out by car row? – Malcolm Farr in the Sydney Daily Telegraph believes Kevin Rudd will not survive if it is firmly established that he – or even his office – made special pleadings for car-dealer mate John Grant. It is undoubtedly his greatest crisis in politics.