With all the tut-tutting by politicians that goes on when a footballer having a big night out gets into a bit of trouble, there was little option but for the Federal Liberals to move quickly to get rid of one of their own this week. An adviser to Liberal Sophie Mirabella, the Opposition’s spokeswoman on women’s issues, the Melbourne Age reports, has been forced to resign amid allegations of groping and lewd behaviour at a black tie charity function in Canberra.

The footballers, meanwhile, are seeking understanding with today’s Sydney Morning Herald featuring frustrated NRL stars speaking out about what they perceive as unfair stereotyping of them in the wake of recent off-field scandals. A footballer’s life: confusion, temptation and guilt by association the paper headlines it as players say they are confused by the expectations of fans. The poor little fellows think  they have few rights and that there is no one standing up for them, with many clubs instructing their charges not to make any public comment in the belief that they can ride out the storm.

Party is over for MP’s staffer – Sydney Morning Herald

Madden’s ambitions ‘irrelevant’ – Premier John Brumby has been forced to hose down leadership speculation sparked by the move of his Planning Minister, Justin Madden, to the lower house – Melbourne Age

Chinese give PM Kevin Rudd lesson on neoliberalism – The Australian 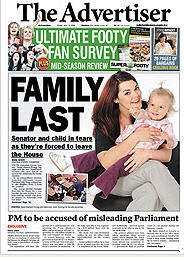 A target so small, voters may ignore it – Andrew Clenell in the Sydney Morning Herald delivers a harsh assessment of NSW Liberal Leader Barry O’Farrell .

Belles of the ball can’t find nice things to say about each other – Annabel Crabb goes to a ball and finds that, on a funny night, neither the PM nor the Opposition Leader could say anything pleasant about each other – even in jest – Sydney Morning Herald 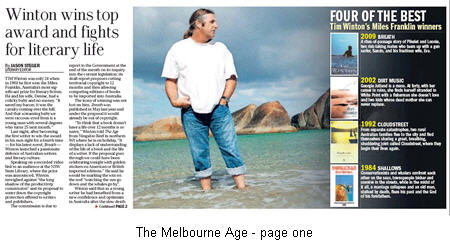 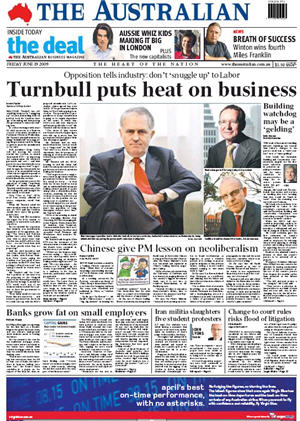 Malcolm Turnbull puts heat on business: don’t ‘snuggle up’ to Labor – The Australian

Made in Indonesia, sold as Aboriginal – Sydney Morning Herald

Change to court rules risks flood of litigation – The Australian

Sex and the sexes

The homeless living in Redcliffe showground story is heartbreaking and a sign of times to come. Nomadic ‘tribes’ of uneducated, mentally ill and downright poverty-stricken Australians have no choice but to ditch an economy beyond their means and capabilities. A let-it-rip free market in which governments on-hire their responsibilities has turned society into survival of the fittest. Profit over people has sent communities off the radar and in this case – into Redcliffe showgrounds.

Re: the NRL Players upset that there is no-one representing them, well the AFL have a Players’ Association, surely they could set up something similar if there is not yet something there in place.