I have a copy of the letter that young Malcolm Turnbull wrote to his ex-girlfriends cat, reports The Justinian's Richard Ackland.

The issue of The Strangled Cat got a trot in Annabel Crabb’s Quarterly Essay on Malcolm Turnbull.

Being the author of the article in the old National Times that Turnbull sued on many years ago maybe I should fetch-up some dog eared reflections.

The article in the Clancy column didn’t directly assert that Turnbull strangled the cat of his former girlfriend, Fiona Watson.

It was 1981 and the 26-year-old thruster was putting himself forward to be preselected as the candidate for the cushy Liberal seat of Wentworth.

The contentious words in the Clancy item were:

…if Turnbull is preselected he could face some hostile questions from the Animal Protection League.

It was utterly cryptic, nonetheless it resurrected the strangled cat story, which had been doing the rounds of Sydney’s Eastern Bloc four years earlier when Fiona called off her tempestuous relationship with the young blade.

Turnbull sued in the ACT Supreme Court, often referred to by media defendants as “the cowards castle” because there were no juries, only plaintiff-loving judges.

Another important fact was that the cat’s name was Nessie.

The case was all about whether Fairfax could prove Turnbull had strangled Nessie.

Fiona Watson had been interviewed by the lawyers and silks Neil McPhee and David Levine gave advice to Fairfax.

It emerged that one of the key things for the defendant was to secure letters that Turnbull had written to Nessie and her mistress. Something helpful might turn up there.

There was also a strong argument that the article didn’t mean what Turnbull claimed it meant.

In advice to the then Stephen Jaques Stone James, Fairfax’s solicitors, he said:

There is no direct evidence that the cat was strangled at all, let alone that the plaintiff strangled the cat. We should press Fiona for the letters to the cat. The precise terms of the last letter may be critical.

There are some difficult decisions to be made in this case in the near future, and we need every piece of available evidence on which to evaluate those decisions.

I have the uneasy feeling that this case could prove nasty.

McPhee advised that proofs should be obtained from various potential witnesses, including Fiona’s neighbours in Bathurst Street, Woollahra, the vet and others who had first hand experience of Turnbull’s volatile character.

In due course, the cat letters did turn up and were put into the further and better particulars of documents.

Soon after the case was settled, mostly for costs although Crabb says in her essay it also included “modest damages”.

Turnbull has consistently trumpeted this as a huge victory.

Journalist Mark Westfield didn’t help by blundering-in and repeating the story in one of his Herald columns, which led to another settlement.

Turnbull told Crabb that he remembers the cat, which he thinks “got run over by a car”.

This is contrary to what Fiona Watson told The National Times.

She thought the cat had been strangled. She said she found the deceased moggy under some bushes.

The neigbours allegedly had seen Malcolm around the house at the relevant time and Fiona felt that Turnbull had been behaving irrationally after she expressed her intention to break-off the relationship.

All of this led your editor, nearly 30 years ago, to scribble this oblique reference about the prospective polly with the enormous sense of self-worth.

The story would have died as a bit of irrelevant banter had not Turnbull catapulted the affair into a cause célèbre by suing.

Turnbull routinely dropped the “defamation” word. Journalists who interviewed him for profiles invariably were threatened that he’d sue their pants off if he didn’t like what was published.

He waged a torrid war of libel threats against the former editor of The Economist, which had published something innocuous about the murky matter of FAI and HIH.

Last year as Opposition Leader he even came up with the cock-eyed notion that Kevin Rudd had libelled George W. Bush by privately referring to the then President as a “fool” for not knowing what the G20 was.

Oddly, Turnbull didn’t pursue Conrad Black in the courts. The former mogul said in his autobiography A Life In Progress that Turnbull, “had allegedly punctuated an altercation with a friend by disposing of her cat.”

In the American edition of the book it was more lurid:

He allegedly punctuated an altercation with a friend by sneaking into her home late at night and putting her kitten into the freezer, transforming a frisky pet into a well-preserved corpse.

As it happened Peter Coleman, father-in-law to Dollar Pete Costello, won the Liberals 1981 preselection for Wentworth and went on to win the seat.

There had been no animal deaths connected to him.

Maybe Turnbull thought he might have won the seat had there not been this unhappy story about the cat.

In 1993 Turnbull gave to reporter Evan Whitton some reflections about his preselection loss:

And the Liberal Party, with its unerring determination to pick the right man for the right job rejected the 26-year-old Rhodes scholar and chose Peter and they were probably right.

All my warnings and declamations about this man have fallen on deaf ears and his clamber up the greasy pole has been undisturbed by my outpourings.

“No cat has died at my hands,” Turnbull reassured Crabb.

Why I dredge-up the topic is because Crabb reported in her Quarterly Essay that the Leader of the Opposition said he cannot remember writing to the cat.

Further, The Sydney Morning Herald in a recent story headlined “Feline furphy dogs Turnbull” reported that he denied writing letters to the cat after he and Fiona broke up.

To clear up this nagging issue once and for all here is exhibit one: an unearthed letter from Malcolm Turnbull to the cat Nessie: 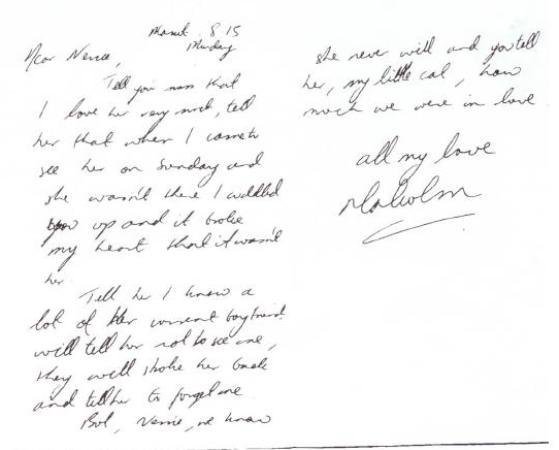 It’s quite moving and gives us an insight into the young Malcolm, beyond the posturing, bumptious, angry character for which so many fondly remember him:

For those having trouble with the hieroglyphics here it is:

Tell you [sic] miss that I love her very much, tell her that when I came to see her on Sunday and she wasn’t there I cuddled you up and it broke my heart that it wasn’t her.

Tell her I know a lot about her current boyfriends will tell her not to see me, they will stroke her back and tell her to forget me.

But, Nessie, we know she never will and you tell her, my little cat, how much we were in love.

At the time I was working at The Bulletin. I was very upset about it. I regard it as a joke now.

Apparently (Diamond) Jim McClelland, Fiona’s step-father was disturbed by her story about the cat. He said of Turnbull:

What on earth would have given him that notion?

This story originally appeared in The Justinian.

And I always assumed that “strangle the cat” was a euphemism. Live and learn…

This tale will be one of Kevin’s salvo’s in the upcoming character assassination that is the Federal Election. Most likely this year.

Of course we all enjoy gossip, and this confirms Richard Ackland’s dedication to his craft because he must be aware (surely he is aware despite or because of so many hundred instances of ambiguous evidence) that his looseness with facts and taste for silly trivia and appearing to enjoying it as if it were a triumph of investigatory or analytical journalism doesn’t earn him respect.