THE BEST OF THE MORNING’S STORIES

Banks have gouged on interest rate guarantees: ALP – The Australian 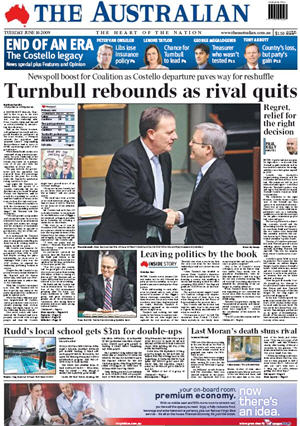 Banks have gouged on interest rate guarantees: ALP – The Australian

Which bank parties as mortgages soar? – it seems jacking up interest rates is worth celebrating – with Krug and caviar reports the Sydney Daily Telegraph about a planned CBA end of financial year staff gathering 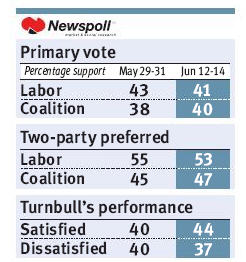 Standoff on Rudd ‘pugilist’ remark – a Tasmanian union leader has publicly rebuked Kevin Rudd over his attacks on Senate hopeful Kevin Harkins, and warned against federal intervention to nobble his preselection – The Australian

Dancing his last fandango, he still had star quality – says Tony Wright in the Melbourne Age

Some words for the Member for Higgins – Melbourne Age

End of an era as Costello goes – Sydney Morning Herald

Rudd close-lipped on RBA millions – the Melbourne Age reports that the Prime Minister is silent on the millions of dollars in payments to foreign middlemen by the Reserve Bank of Australia’s banknote printing subsidiaries.

You caught me, admits RailCorp manager – the Sydney Morning Herald reports from ICAC

Card rort findings sent to regulator – an audit report and legal advice to the Health Services Union has suggested there were financial irregularities and possible breaches of industrial law while the union’s national office was headed by the Labor MP for Dobell, Craig Thomson – Sydney Morning Herald

Dr Peter and Mr Costello – Tim Colebatch in the Melbourne Age says there are two sides to Peter Costello, and they have not been equally admirable.

Regret, relief for right decision – Paul Kelly in The Australian on Costello’s departure

What will we do now that he’s no longer not there for us? ponders Annabel Crabb in the Sydney Morning Herald

Leader Emerges With Stronger Hand – Mahmoud Ahmadinejad’s victory demonstrated that he is the shrewd front man for a clerical, military and political elite more unified than at any time since the 1979 revolution – New York Times

Stay the Course – Paul Krugman in the New York Times writes that the debate over economic policy has taken a predictable yet ominous turn: the crisis seems to be easing, and a chorus of critics is already demanding that the Federal Reserve and the Obama administration abandon their rescue efforts 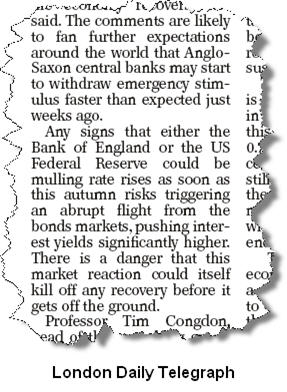 Rates may rise later this year, warns CBI – The CBI has sharply upgraded its growth forecasts and given warning that the Bank of England may begin raising interest rates by the end of the year, much sooner than widely expected – London Daily Telegraph

German credit crunch deepens – Germany’s top industrial group has warned that credit conditions are going from bad to worse across much of the country’s manufacturing base, dashing hopes for a swift recovery – London Daily Telegraph

Aluminium price up as China increases demand – The Australian

Demand for Vegetable Seeds Is Rooted in Recession – Washington Post 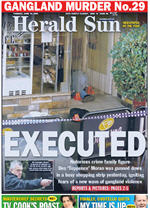 Not only does cyber crime pay, but it pays very well – says Australian Institute of Criminology – Melbourne Age 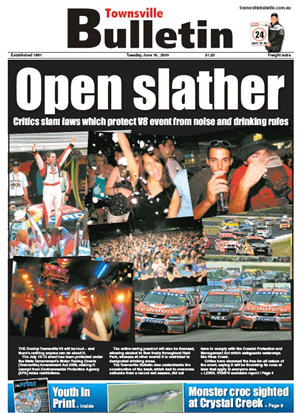