Corpse of Ruth Cracknell the new ABC Head of Comedy

The pick of Sunday morning’s media

Whelan rewarded on the well-worn path to Canberra – Another NSW Labor backroom operator has landed in Canberra with the appointment of John Whelan as a senior strategist in Kevin Rudd’s office. Mr Whelan has a political pedigree dating back to premier Bob Carr, for whom he spent six years as senior adviser and executive officer – Sydney Sun Herald

Sartor claws towards Labor leadership – MP Frank Sartor is being seriously considered for the premier’s job as infighting paralyses Nathan Rees. Senior Labor figures and MPs are so frustrated by the party’s performance they are actively weighing Mr Sartor’s leadership potential despite years of dismissing his ambitions because of his hot-headedness – Sydney Sunday Telegraph

Are cyclists being taken for a ride? – the Sunday Melbourne Age looks at the proposed costs of hiring a bike for inner city travel

Anything flies in Wonderland – Glenn Milne in the Sydney Sunday Telegraph and other News Sundays, on what the Commonwealth Bank’s mortgage interest rate rise will be on consumer confidence and thus economic recovery.

Ghost in the machine – Josh Gordon in the Melbourne Sunday Age writes that the endless speculation about Peter Costello is turning out to be, well, endless. 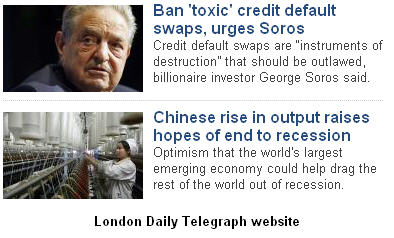 It’s comedy as usual at ABC – The Chaser’s Chris Taylor was offering a newsflash on his Facebook page yesterday: he told friends he had just learned “that the ABC will appoint Ruth Cracknell’s corpse as the new Head of Comedy” – Sydney Sun Herald

I’ll have a little Elvis with that, thanks – Cafe and restaurant patrons could soon be eating in silence, after a proposal by Australia’s largest record labels to increase the cost of background music by up to 2000 times – Sunday Melbourne Age Abyss awaits young as teen drug rehab closes – Children with drug and alcohol addictions will “slip through the net” when the Victoria’s only residential rehabilitation program for young teenagers closes this month because of a lack of funds. Melbourne Sunday Age