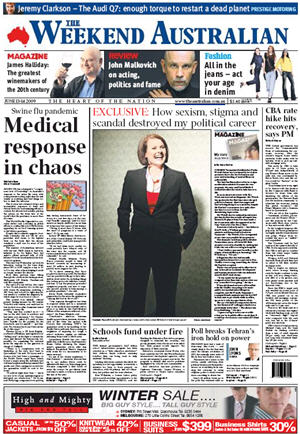 Medical response in chaos in swine flu pandemic – The Australian

Gossip and mistrust replace progress at Bonn as campaigners fear the US will settle for deal with China – The Guardian, UK

Rebuilding our economy – George Megalogenis takes an in depth look

Rules bent as ‘facelift’ funds spent on laptops – The Australian

Health to get $15 billion in NSW Budget – Sydney Daily Telegraph

Is Kevin the new Barry McKenzie? – Annabel Crabb in the Sydney Morning Herald

Battle for the wooden spoon – Nathan Rees is holding power through a dearth of talent and opportunity, writes Andrew Clennell in the Sydney Morning Herald

How sexism, stigma and scandal destroyed my political career: Paula Wriedt – The Australian

If the stars align – Attaining political leadership is an inexact science — it’s a matter of being the right person, at the right time and having a bit of luck. is the opinion of Shaun Carney in the Melbourne Age

Just who in heaven’s name is Kevin Rudd? – Tony Wright goes searching in the Melbourne Age

Fix it, don’t break it – is Paul Kelly’s advice on what should be done to the financial system – The Australian

Too much spin will make voters sick – Lenore Taylor in The Australian describes political spin as being a bit like make-up, it works best when no one notices it.

Watch out for partisan manoeuvres – Peter van Onselen warns that the appointment of Joseph Ludwig as Special Minister of State makes it more likely that Labor will descend into partisan advantage when it comes to entitlements, an area for which the special minister is directly responsible – The Australian

Lot of hot air – fair dinkum – Laurie Oakes in the Melbourne Sun and the other News tabloids writes that Kevin Rudd talks as though he really thinks there is a chance the Coalition will cave in and pass his emissions trading scheme legislation through the Senate. Maybe Malcolm Turnbull should spell out the Liberal Party attitude in language the Prime Minister can understand. “Stick your head up a dead bear’s bum, Kev.”

US says it will not demand binding carbon cuts from China – The Guardian, UK

Gossip and mistrust replace progress at Bonn as campaigners fear the US will settle for deal with China –
Despite the hardened scientific view since Kyoto, the deal at Copenhagen risks being another messy compromise – The Guardian, UK Beachfront residents on own against sea rise – owners of beachfront homes will get little protection or compensation from the State Government if their properties are threatened by rising sea levels caused by climate change or coastal erosion, under a plan in the course of being developed – Sydney Morning Herald

Crikey: Education yarn takes a turn for the bizarre – The Australian

National Times set for online relaunch – The website will replace the opinion section on news sites including theage.com.au and will feature the best of Fairfax’s opinion writing, commentary and analysis, coupled with guest commentaries from politicians, academics and other public figures, the publisher said in a statement – Melbourne Age

Medical response in chaos in swine flu pandemic – The Australian

Re. Global Warming vs Swine Flu. There’s ample irony for the digging in these conjunction of these two.

Crikey’s one of the worst offenders, so Pro-Global Warming (in that they believe passionately) yet so dismissive of Swine Flu. Hypocrites.

Good point there, Joel B1.

How true, Scottyea
The diversity of opinions in the articles is “refreshing” .