Jude Law and a touch of Hollywood

Serious words from the world's weekly news magazines and other periodicals 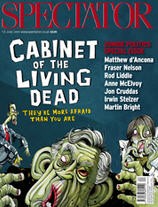 The man who knew so much – Paul Johnson in The Spectator reviews a volume of letters written by Isaiah Berlin and a volume of reminiscences about the Superdon. A review with enough interesting snippets so you can pretend you might even have read the books yourself.

Mind your language – The Dot Wordsworth column in The Spectator on the use of plural pronouns partly to avoid the difficulty of a singular pronoun, he, standing for women as well as men. The decriminalising of they as a singular pronoun is a change we cannot resist.

Fatalism v fetishism – How will developing countries grow after the financial crisis? – The Economist

The UN’s secretary-general – The score at half-time – Ban Ki-moon has turned in a mixed performance so far. He needs to improve says The Economist

Smile on the face of the tiger – Obama’s speech in Cairo on the Middle East peace process was seductive, but its content was as morally bankrupt as any of Bush’s spiels writes John Pilger in The New Statesman

The corrupted currents – As Jude Law brings a touch of Hollywood to the role of Hamlet, Jason Cowley draws parallels between the world of the great plays and the plight of our embattled Prime Minister – The New Statesman

. . If it be now, ’tis not to come; if it be not to come, it will be now; if it be not now, yet it will come; the readiness is all. Since no man has aught of what he leaves, what is’t to leave betimes? Let be.
Hamlet

An inconvenient economic truth – Britain’s faith in carbon trading as a way of reducing greenhouse gases could be dangerously misplaced, according to an independent academic working with the Department of Energy and Climate Change – The New Statesman

A label of love – Island Records, which turns 50 this year, helped shape the modern music business – The New Statesman

The Same-Sex Future – David Cole looks at some recent publications and seeks to answer what explains the trend toward legal recognition of same-sex marriage or civil unions? While the risks of an adverse Supreme Court ruling are considerable, recent developments suggest that a state-by-state strategy that pursues civil unions politically and same-sex marriage through the courts may be most likely to succeed. New York Review of Books

This Woman Is Dangerous – Michael Dirda on the complete Ripley novels – The English-speaking world might casually slot Patricia Highsmith as a writer of crime fiction, but Europeans honor her as a psychological novelist, part of an existentialist tradition. Highsmith’s books, after all, explore human souls in extremis, probe the fluid nature of identity, and generally conclude that life is little more than an absurdity and a cheat, when not a downright horror – New York Review of Books

The strangest force – Seven mysteries of gravity – The New Scientist

Like a hole in the head: The return of trepanation – Our ancestors used to drill holes in the skull to expel demons – now the technique is making a comeback as a cure for dementia – New Scientist 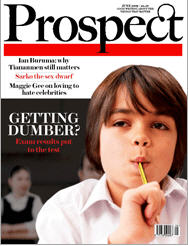 Are children getting dumber? – While Britain’s annual exam standards row rages on, the most important question is ignored: what should our children learn? Prospect

The Global War for Souls – Religion is once again one of the most urgent fields of human experience. Now an important new book has startling things to tell us about its future. Eric Kaufmann reviews God is Back: How the Global Rise of Faith Is Changing the World – By John Micklethwait and Adrian Wooldridge (Allen Lane, £25)- Prospect

Scheme of Rivals – Egypt versus Iran – The New Republic 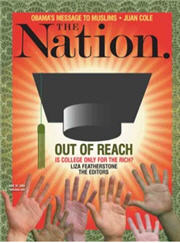 Out of Reach – As the cost of college hits the stratosphere, students are organizing to bring it down to earth.The Nation

Radioactive Revival in New Mexico – Navajos say “No!” as the return of uranium mining threatens to despoil their lands and health –  The Nation

Pop Notes- Night at the Museum – Reviews Neil Young’s  “Archives Vol. 1 (1963-1972)” (Reprise) which comes in three formats: an eight-CD version, which goes for around a hundred dollars; a ten-DVD set, for around two hundred; and the ne plus ultra, a ten-disk Blu-ray box, for three hundred – The New Yorker