Obama can undo the damage Bush did to US-Iran relationship

Iranians have a chance to vote against the confrontational path of President Mahmoud Ahmadinejad. The US can help them make that choice, says Shahram Akbarzadeh.

Iranians are going to the polls today to elect their next president. The results of this election have been widely anticipated. The electorate has the chance to move the country away from its confrontational path with the international community set by the incumbent President Mahmoud Ahmadinejad. The United States can help Iranians make that choice.

The ascent of hardliners in Iran was largely due to the failure of the reformist agenda. President Mohammad Khatami who presided over Iran between 1997 and 2005 had made big promises. He had promised to deal with waste and nepotism in the economy, open the political stage and ease-up state restrictions on social and cultural activities. His record on these domestic issues was patchy as his reformist agenda was stone-walled by a conservative judiciary and legislative vetting agency. But on the international stage, Khatami had a much better run. His “dialogue of civilisations” initiative was a response to the official deadlock between Iran and the United States.

In a famous interview to CNN in January 1998, Khatami suggested a way around official barriers by building societal and cultural links and understandings. The idea was picked up by the United Nations, proclaiming 2001 the year of Dialogue among Civilisations. Iran’s image on the international stage was on the mend, albeit slowly. The September 11 attacks offered another opportunity for the reformists. In an unprecedented display of solidarity with the United States, Tehran residents started a candle-light vigil for victims of terrorism in New York. Subsequently, Iran offered access to its airspace to US forces for search and rescue operations during the 2001 war against the Taliban.

Iran’s commitment to Afghanistan’s post-Taliban recovery was tangible grounds for US-Iran cooperation. But hopes of a rapprochement were soon dashed in January 2002 with President George W Bush’s State of the Union speech which included Iran in the Axis of Evil.

The subsequent invasion of Iraq and the increasingly harsh tone adopted by the US administration when dealing with Iran reversed any small gains that civilisational dialogue might have achieved. In the meantime, Iran’s insistence on pursuing atomic energy without the full oversight of the International Atomic Energy Agency only served to feed suspicions about Iran’s real intentions. Bush’s response was to threaten Iran with regime change, a la Iraq.

By early 2005, the reformist camp in Iran was in disarray. The ascent of neo-conservatives in the United States was mirrored by a growing assertiveness of the conservatives in Iran. This was a time for tough talking and saber-rattling, not for dialogue. All the gentle-sounding promises of Khatami had come to naught, making Iran look weak.

This was the context within which Ahmadinejad won presidency in Iran. He thrived in that confrontational atmosphere and took pride in ensuring Iran’s pariah status. Making threats to Israel and the United States and regurgitating fiery rhetoric which marked the early years of the Islamic Republic, Ahmadinejad was in his natural element. But the arrival of Barack Obama has put him on the back foot.

President Obama has done well to break the cycle of threats and counter-threats that has defined US-Iran relations. This is the best chance that Obama can give the reformists in Iran.

The United States needs to shake off the image of the global bully. The Obama administration seems well aware of the need to restore confidence in the United States as a team player, respecting international rules and the rights of others. The New Year message of President Obama to the people of Iran, delivered on YouTube on 21 March 2009, was a remarkable gesture of humility and good will. Referring to the great civilisation of Iran and its contribution to the world, Obama talked of the need for respect and mutual understanding.

This was a direct appeal by the US president to Iran — a bold and unprecedented move which generated a stir in the country. Ahmadinejad and his conservative cohorts have no response to Obama’s charm offensive.

In the broader area of Middle East policy, Obama has refused to be co-opted into the Israeli agenda. Despite Prime Minister Netanyahu’s best efforts to impress the near and present danger of Iran, during his visit to Washington last month, President Obama kept the focus on the protracted Palestinian-Israeli dispute. He insisted on halting Israeli settlement activity in the occupied territory of the West Bank.

This is in line with numerous UN resolutions and a key element of the peace process. President Obama later articulated his Middle East policy in Cairo. All observers agree, this was a balanced and respectful address which did not demonize Iran.

This is the most amenable international environment that Iranian reformists could hope for. Washington seems to be responding to the call for “dialogue of civilizations”. This response is delayed, but better late than never.

A/Professor Shahram Akbarzadeh is Deputy Director of the National Centre of Excellence for Islamic Studies, University of Melbourne, and co-author of US Foreign Policy in the Middle East (Routledge2008). 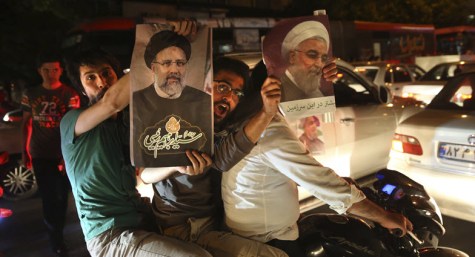 Meet the men running for the Iranian presidency

If the Iranian election goes to the (relative) moderates (fingers crossed) following the Lebanese result Obama will have achieved more in the Middle Eastin six months than George W. Bush achieved in eight years through “toughness” wars etc etc.

It would also raise the question as to whether Australian policy towards the Middle East needs to be more even-handed and inclusive and less a pale imitation of the Bush line.