Is Tracy Grimshaw the most powerful person on TV?

Tracy Grimshaw has taken control of A Current Affair in a way no other presenter has done since Jana Wendt.

So far she has bagged two big scalps: Matthew Johns, the errant Rugby League footballer, and Gordon Ramsay, the foul-mouthed cook who she was playing up to only a year ago. No more of that for our Tracy, who is now the most powerful person on Australian TV.

She suddenly has more clout than “Red” Kerry O’Brien at The 7.30 Report, Tony Jones at Lateline/Q&A and Kochie and Mel (or Karl and Lisa) in the mornings.

The row over comments made by Gordon Ramsay has allowed her to take the upper hand over the producers and management of the program and Nine’s News and Current Affairs division, John Westacott and Mark Calvert. From now one They’ll “bone” our Tracy at their peril.

Her move to grab control and assert her leadership coincided (some say was prompted) by the change in management at the program when executive producer Darren Wick was shifted to head up Nine’s faltering 6pm news in Sydney and the less experienced Melbourne producer of ACA, Grant Williams, was named EP.

Grimshaw and Grant Williams are close: ACA has been all but based in Melbourne since Grimshaw moved back in June last year. There’s also a sense that Grimshaw’s assertiveness has method to it: by turning the focus on the host in her new Keith Olbermann mode, the program has risen out of its ratings rut. There’s also a sense of the Melbourne office of Nine asserting itself over Sydney (that’s the continuing Eddie McGuire/Jeff Browne grouping).

Ever since Grimshaw took a stand over the Matthew Johns story the ratings have remained high, staying out of the zone 900,000 to 1.1 million they’d been getting on Thursday and Friday nights earlier in the year (which is the best yardstick).

Last month Grimshaw editorialised about his’ lack of accountability — in her opening monologue she said she wanted Johns to answer questions about the apology he had tried to give in a short interview on the NRL Footy Show on Nine about the claims made in the Four Corners report.

“Even though no charges were ever laid, (the woman’s) experience should rightly redefine the notion of consent and whether a star-struck 19-year-old could even be deemed capable of consenting to the scenario she ultimately endured,” Grimshaw said on ACA on May 12.

“Unfortunately a man we all know, and I personally like, Matthew Johns, has been heavily implicated in this event, and I believe he needs to step up, face some hard questions and talk properly about it, rather than just a few uncomfortable lines delivered on The Footy Show.”

It was a personal editorial, presented to camera, with frequent use of the word “I” instead of “We” which would have signified that this was ACA talking. Instead, Grimshaw took a leaf out of the Keith Olbmermann style of news presentation and sprinkled it with a touch of Howard Beale by personalising the message — she made herself and the program one and the same:

The next night Matthew Johns and his wife appeared with Ms Grimshaw and she earned good praise for the toughness and unflinching nature of her questioning.

Monday night’s editorial getting stuck into Gordon Ramsay for his comments about her at the Melbourne Good Food & Wine Show over the weekend were again couched in the first person. Grimshaw maintained that she was attacked (as she was), and said she didn’t like Gordon Ramsay. She also slammed his as a “bully”. It’s a very skilful transposing of her role on the program as the host, into the personification of the program.

It’s something we haven’t seen for years. Ray Martin tried it, but was usually satirised or derided for his attempts. He was seen as elitist, over paid and lacking the obvious common touch that Ms Grimshaw hasn’t lost in her long years in TV journalism as a reporter and as the host of Today, which was a tough task.

This morning Gordon Ramsay was brought to his knees: a spokesman claims he apologised unreservedly to, not Tracy, or Channel Nine, but to an old UK friend, Sky News in Britain. For Ramsay, Sky News is a much more important outlet. His main market is still the UK where his verbal battering and jibes of Ms Grimshaw, and her return assault, has made front page and top of bulletin news.

Ramsay has unreservedly apologised to Ms Grimshaw, a spokesman for the chef says.

The spokesman said the controversial British star realised his remarks at a Melbourne cooking show last weekend were “inappropriate and offensive”.

“His comments relating to Tracy Grimshaw, who had interviewed Gordon the previous evening, were off the cuff and in response to heckling from the audience,” he told Sky News in London.

So will Mr Ramsay front ACA tonight and do the deed in person, with the most powerful person on Australian TV?

Regardless of whether he does, I bet Ms Grimshaw won’t be starting any future interview with him with the “F” word, as she did in June of last year.

Those days of being the puppet of a production team are well behind her.

Of course those from the grassy knoll say it was a plot concocted by Nine and Ramsay to boost ratings. But if that was the case, it’s hard to think of Tracy Grimshaw as a willing victim.

Reaping what you sow: Channel Nine and the Gordon Ramsay media nightmare 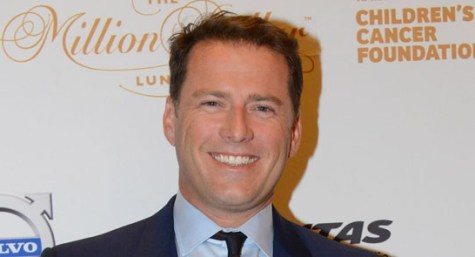 Will Tracy Grimshaw retire to make way for Karl and his handcart of gold?

Perhaps I missed something but I fail to see how Tracy is really a victim. By putting herself in harms way she has ultimately benefited massively. Pretty simple ploy really, set up big bad English man to be mean to “our Tracy” gain a whole lot of sympathy from mainstream audience. Gordon goes home with even more reputation than he arrived with and Tracy elevated to heroic reporter status. Everyone wins!

Given that both Ramsey and ACA need publicity badly its understandable,but Grimshaw acting as the moral arbiter of the land is some kind of very bad joke.
It along with TT would be two of the most unintelligent, dumb, stupid, shows on TV,god know why anyone would bother watching.
Another hunter for her 15min of fame,whatever happened to Robson,why anyone with a brain takes any notice of these plastic people is beyond me

Did you say Gordon Ramsay was a “foul-mouthed cock”?

Good on you Tracy.Keep up the good work!
What’s with Ramsey anyway?Basically a “cook” probably paying good money to a publicity agent on the basis that any news is good news.
The Herald Sun is obviously promoting him(suprise suprise, his recipies are widely featured in their “newspaper”) and had him today on their front page-despite all sorts of important events to report.Amazing!
Don’t take Ramsey or the Herald Sun seriously.Both are obvioulsy full of self promoting hot air!

Tracy is hardly a victim.
She’s in the early stages of Eddie-fication and I must say, I’m already sick to death of her.
http://screamedia.blogspot.com/2009/06/grimshaw-vs-ramsay.html