The best of today's papers: A soap opera starlet who is the squeeze of the heir to a television fortune is found by a police raid in the bedroom of a bikie hoodlum with drug use suspected. But wait, it gets better... 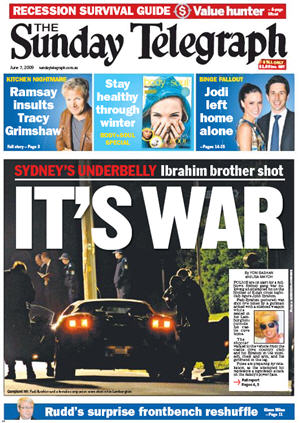 Jan McLucas quits the front bench – Brisbane Sunday Mail reports on the now former parliamentary secretary for health and ageing, who stepped down following revelations by The Sunday Mail that she was living in Canberra but claiming a travel allowance, saying her home base was Cairns.

Julia Gillard at ease in the hot seat – Ellen Whinett has coffee at Altona with the Deputy Prime Minister for a Sunday Herald Sun profile.

State’s losing hand – Melissa Fyfe in the Melbourne Sunday Age writes that the Victorian Government is trying to keep its disastrous deal with Crown a secret. How Jodi ended up in the bedroom of the bikie was topping the tabloid most read lists overnight.

And there’s nothing like a connection with a media baron’s son to keep it there. Crackdown on festival alcohol sales – Brisbane Sunday Mail reports on Queensland plans to ban full strength beer and bottles of wine from sale at many major Queensland festivals from next month under new guidelines being drafted to target binge-drinking.

Calls for overhaul of family law system – child welfare campaigners have called for an overhaul of the family law system, citing statistics they claim show courts have forced children to spend time with abusive or violent parents, reports the Melbourne Sunday Herald Sun

Children at risk left to fend for themselves – Melbourne Sunday Age