Down go the British ministers – one, two, three!

In Australia Labor lost one minister. In the UK the tally for the day was three making it six ministers gone in four days. And at the ballot box for local council elections it was a complete humiliation for Labour. 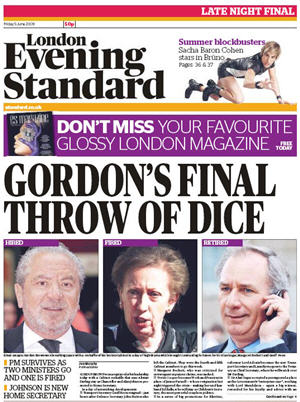 Costs, taxes on the up and up in Queensland – Brisbane Courier Mail

Martin Ferguson lashes out at unions – declaring they should be more focused on protecting the jobs of their members than agitating for a second wave of workplace laws. – The Australian

Oh what a lovely crisis – Paul Kelly in The Australian says that on both the economy and defence management, the Rudd Government finishes this week significantly strengthened.

Liberals’ divided men – Peter van Onselen writes in The Australian that there is one issue that unites MPs on the non-Labor side of the parliament: the Government’s debt bill is too high and Labor is too readily prepared to run budget deficits.  Importantly, it intellectually unites the two most formidable Liberals in the parliament, Peter Costello and Malcolm Turnbull. This is potentially fertile ground for an Opposition down in the polls and searching for relevance. It is a shame, practically speaking, the two men can’t work together.

Everybody loves Julia: why Gillard is No. 2 with a bullet – Peter Hartcher in The Sydney Morning Herald

No valid defence – Shaun Carney in the Melbourne Age says it is clear that there was a conspiracy to get rid of Joel Fitzgibbon, but his own actions helped engineer his downfall. Obama in Egypt: ‘It’s time for us to act’ on peace – During a groundbreaking visit to Egypt, President Barack Obama spoke bluntly on the Israel-Palestinian chasm, calling for mutual understanding and peace – Miami Herald Sweet victory for BHP as Rio yields – The Australian

Melbourne the swine flu capital of the world – The Australian