In this morning's papers: The deal between Rio Tinto and Chinalco is off which will make Treasurer Wayne Swan a relieved man. He was on a hiding to nothing if the decision had been left to him. 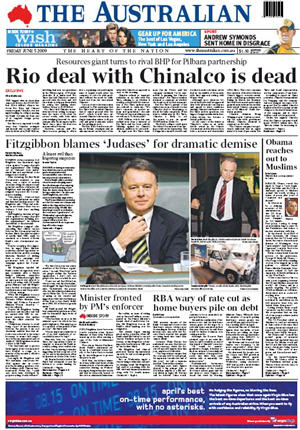 $24.4bn Chinalco deal with Rio Tinto is dead – The Australian Bored with economic miracles? Try this sacrificial offering – Tony Wright in the Melbourne Age on a ministerial resignation

Fitzgibbon only has himself to blame – Patrick Walters in The Australian

A union no more: Rudd and co. have claimed the upper hand – Michelle Grattan in the Melbourne Age sees the reality as clear. Unions and the Government are feeling mutual disgruntlement and resentment. The unions think they helped bankroll Labor to power and are not getting enough in return. The Government believes the unions whinge too much, and should concentrate on what has been delivered.

Rights charter like a dead parrot – Bob Carr in the Sydney Morning Herald writes that more judicial review, or judge-made law, is the last thing Australia needs. So nobody should be distressed that the push for an Australian charter of rights is exhausted.

Unions putting ALP into reverse – Michael Costa writes in The Australian how unions may play a useful role for Labor in opposition but they are a destabilising liability in government.

Barack Obama reaches out to Muslim world – The Australian

$24.4bn Chinalco deal with Rio Tinto is dead – The Australian

Rio Tinto rolls out ‘plan B’ over Chinalco deal – The Australian

States claim they will lose from ETS scheme – The Australian


Land use war: two tribes dig in – An attempt to preserve farmland from coal miners in the Hunter fails – Sydney Morning Herald

States at odds over swine flu tactics – The Australian