Knives are news this morning. Another Indian student stabbed in Melbourne. A Tasmanian Law Reform body questioning the legality of circumcision. 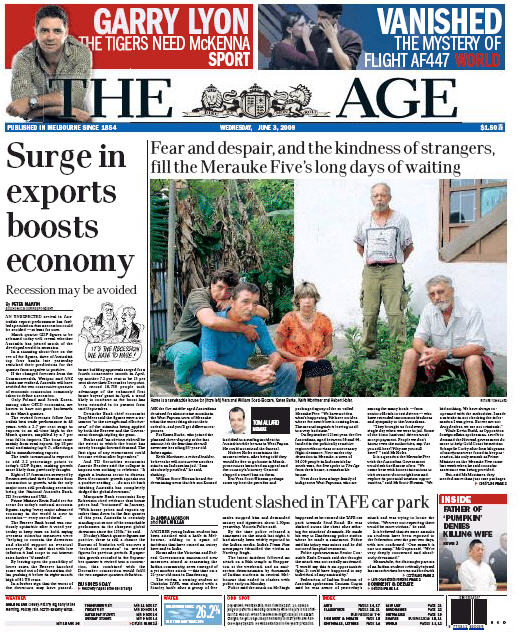 
World’s best exports may hold off recession – The Australian

Consumer boycott threat over attacks on Indians – The Australian

Assaults on Indians ‘not race-based‘ – The Australian

Australians should be out of IPL till attacks stop: Bal Thackeray – Times of India

Three-cornered bout goes full throttle – the Sydney Morning Herald on how NSW backbencher Alby Schultz attempted to throttle the Victorian frontbencher Chris Pearce and it took two other Liberals, both former policemen, about 30 seconds to prise him off.

Fitzgibbon admits gift – the Sydney Morning Herald reports on the Defence Minister, Joel Fitzgibbon, admitting to Parliament last night he had failed to declare a night in a hotel room worth $450, paid for by a health fund run by his brother.

Builders to brick in Gillard – The Australian on the ACTU Congress

MPs urge ‘no secrets’ on schools – Melbourne Age on MPs wanting the Government to be more open about the way schools are selected for much-needed upgrades under the $1.9 billion Victorian Schools Plan: the Government’s 2006 election promise to rebuild or modernise every public school by 2016.

Don’t exhale just yet – that recession may still come, no matter what figures say – says Elizabeth Knight in the Sydney Morning Herald

Pollies’ different tales on recovery – George Megalogenis in The Australian writes that stories federal and state Labor are telling Queenslanders about recession and debt are in conflict.

Parties limber up for election stoush – Lenore Taylor in The Australian as federal politics is entering the electoral pre-positioning phase, where messages are pared back to slogans and delivery becomes shrill.

The enemy within – Paul Kelly writing in The Australian believes Malcolm Turnbull’s political future turns on whether he can get the Libs to support emissions trading.

MPs’ expenses: cabinet meltdown as Jacqui Smith heads resignations – Gordon Brown is facing a major Cabinet crisis after the resignation of three of his senior ministers threw the Government into disarray on the eve of critical local and European elections. London Daily Telegraph

Conservatives put the heat on Turnbull – the right wing of the Liberal Party is bristling at comments by the leader, Malcolm Turnbull, that the party will eventually back an emissions trading scheme says the Sydney Morning Herald

Tiananmen killings: Was the media right? – Reports of the pro-democracy protests in Tiananmen Square and their violent end have had a huge impact on how the outside world sees China. James Miles – who was the BBC’s Beijing correspondent at the time – reflects on the difficulties of covering the story. BBC News

E3 is back and it’s upgraded – The annual video-game conference has kicked off in L.A., and 40,000 are expected to come, up significantly from just a few thousand last year –  Los Angeles Times

Anger at lack of action on obesity – Melbourne Age

Rights of the child

Parents may face delays over Tamiflu for children – Melbourne Age

Cruel cut indeed. It’s about time they looked at the law with respect to this ill-advised non-consensual pleasure-reducing cosmetic surgery. I contend that it clearly is illegal to assault someone with no diagnosis of defect or pathology and amputate healthy normal sexual parts.

Foreskin feels REALLY good. You would be locked up for a long time for even making a pin-poke to the precisely analogous part of a female.