It was all Ronnie Reagan’s fault

The best of this morning's media: as the United States nationalises General Motors, Paul Krugman goes searching for the villain who caused all this economic turmoil and discovers Reagan Did It. 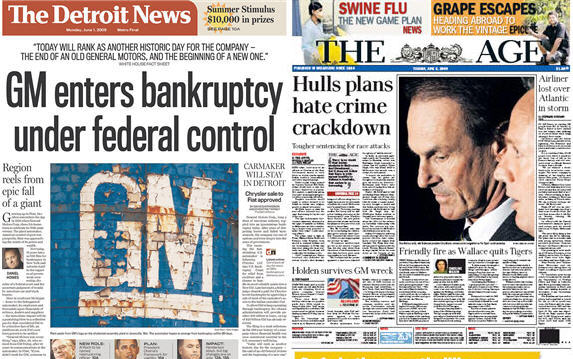 CEO Fritz Henderson: Chapter 11 will make General Motors more competitive – The Detroit News website reports General Motors Corp filed for bankruptcy at 7:57 a.m. today in New York, saying it had no other choice because the Obama administration would only provide it with additional funding in bankruptcy.

Small car pulls Holden out of GM wreck – The Melbourne Age reports that taxpayerfunds and a locally built small car will save Holden from the chopping block as parent company General Motors enters Chapter 11 bankruptcy protection. Rudd and Swan soften blow of recession figures – The Australian


Deadline set for Costello to nominate – Melbourne Age says one of the big unanswered questions lurking on the political landscape will be answered by high noon on June 30 – whether Peter Costello will hang around to haunt Malcolm Turnbull or will he get a new job.

Dumped Tasmanian candidate takes aim at Senate – The Australian reports that a left wing unionist dumped as an ALP candidate before the 2007 federal election following intervention by Kevin Rudd is back — as a key ALP Senate candidate.


Common sense the best rule – Tim Colebatch writes in the Melbourne Age that simplistic definitions of what constitutes a recession hinder efforts to find a path back to prosperity.

When anger makes the bad seem even worse – The Melbourne Age editorial argues there is no doubt that Indian students in Melbourne feel threatened, and there is evidence that some of the attacks on Indian students have been racially motivated. But it does not follow from either of these facts that there is widespread hostility to Indians in Australia, that racism is increasing, or that Melbourne is a more dangerous city than, say, Mumbai.

Despot dynamics: the dirty secret to survival – Peter Hartcher in the Sydney Morning Herald considers why the three countries who could do something about North Korea don’t do so

We’re not the only ones hurting, think of Andorra – writes Christian Kerr in The Australian Infection a riskier prospect for some – Melbourne Age

Threat mixed as swine flu toll grows past 400 – The Australian

Powers to sack and pay at universities recommended – The Sydney Morning Herald reports that a NSW state parliamentary committee has called for changes that would give universities the power to sack their chancellor as well as pay members of their governing council as part of a series of measures aimed at improving the way universities are run.